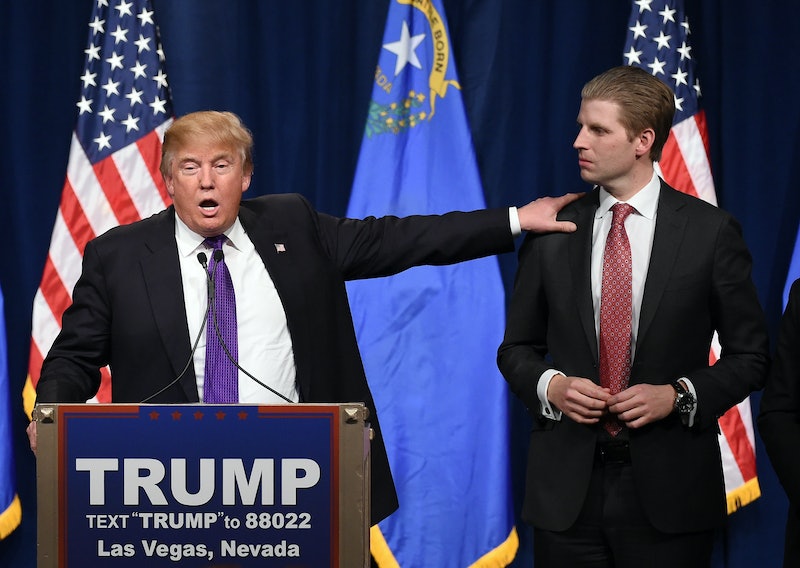 What would the current election be without Donald Trump's controversial, combative tone? According to the outspoken candidate's son, Donald Trump Jr., we'd all be talking much less about important issues if it weren't for the outrageous comments and larger-than-the-debate-stage personality of his father. On Sunday, Trump Jr. was on CNN defending his father's tone and suggesting that it may evolve over the coming weeks.

As this fall's general election nears, there has been lots of speculation surrounding the Donald's tone. On Thursday, Trump's new campaign manager, Paul Manafort, reportedly told members of the Republican National Committee that Trump will alter his boisterous image in an effort to convey a more presidential tone. According to Manafort, "the part [Trump's] been playing is evolving." That may have appeased the RNC some, but it might not have sat well with Trump himself, who seemed to contradict those comments on Saturday.

"Here, I have to rant and rave. I have to keep you people going," Trump said at a rally in Bridgeport, Connecticut, on Saturday. "Everything I say I'm going to do, folks, I'll do." Trump also said that he can be presidential and professional when he needs to, but on the campaign trail, "I've got to be different."

Then, on Sunday, Trump's eldest son weighed in on the ever-important issue of Trump's tone during an appearance on CNN's State of the Union. When asked about the possible shift in his father's campaign persona, Trump Jr. both defended the loud tone and signaled that things could change soon. "It's not that it's an act, but sometimes he does have to talk about things in a certain way to be able to draw the requisite attention that that topic actually needs," Trump Jr. said. "I think for him this is a very natural evolution. He's switching over, getting focused on the general election, where he's going to have to talk to that broader audience."

Aside from debating whether or not Trump will change his tone, there's also the question of whether or not he needs to. He has been largely successful so far, winning state after state despite his brash, often-rude comments. He may very well win his way into the general election with that tone, but it would seem that he does need to present a different side of his personality when the general election arrives. According to The Washington Post, if given the choice between Trump and likely Democratic nominee Hillary Clinton, Americans see Trump as significantly less trustworthy and less experienced than Clinton. They also think Trump has the far worse personality and temperament for the job of POTUS.

Whether Trump's tone changes at all or not, it doesn't seem like much will change before Tuesday's slew of primaries, which will help to determine whether or not Trump makes it to that general election. On Tuesday, Republican voters in Connecticut, Delaware, Maryland, Pennsylvania, and Rhode Island will head to the polls, and more than 150 delegates will be up for grabs. Trump leads the Republican delegate count by a large margin, but anti-Trumpers are ferociously attempting to block his ascent to the 1,237 delegate threshold needed to secure the GOP's nomination.