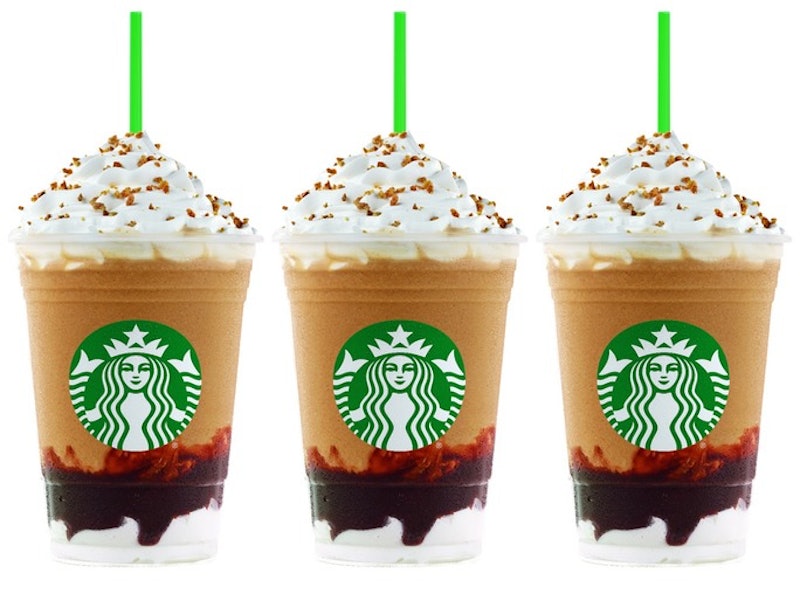 The Starbucks S'mores Frappuccino was a big hit when it debuted in April 2015, but disappeared along with the last days of summer, much to the disappointment of its devoted fans. This year, Starbucks has answered the call for the return of the S'mores Frappuccino, which arrived in stores on April 23 and will be available throughout the summer at participating U.S. and Canada stores.

Starbucks describes the S'mores Frappuccino as a layering of "marshmallow-infused whipped cream, milk chocolate sauce, a creamy blend of graham, coffee, milk and ice finished off with more marshmallowy whipped cream and a graham cracker crumble." Heavenly s'mores in a cup. So let's break it down, shall we?

Like in any good s'mores, the S'mores Frappuccino begins with that essential rich and gooey marshmallow flavor. Baristas start off this layered drink with a dollop of whipped cream at the bottom of the cup.

A delicious graham crunch, blended with ice, coffee, and milk, brings everything together and gives this Frappuccino its perfect s'mores taste.

Yes! There is actually 50 mg of caffeine in this delicious beverage. Cool, refreshing, helps-you-face-Monday-mornings iced coffee.

Because you need more of that marshmallow-infused goodness.

Nothing like a little crunch on top of whipped cream to make you feel like you're enjoying fresh-from-the-fire s'mores.

The S'mores Frappuccino is only at participating U.S. and Canada stores, and costs between $4.25 and $4.95 for a tall. Order one ASAP, and treat yourself to the classic summery taste of graham, marshmallow, and chocolate — with the added benefit of coffee, of course.