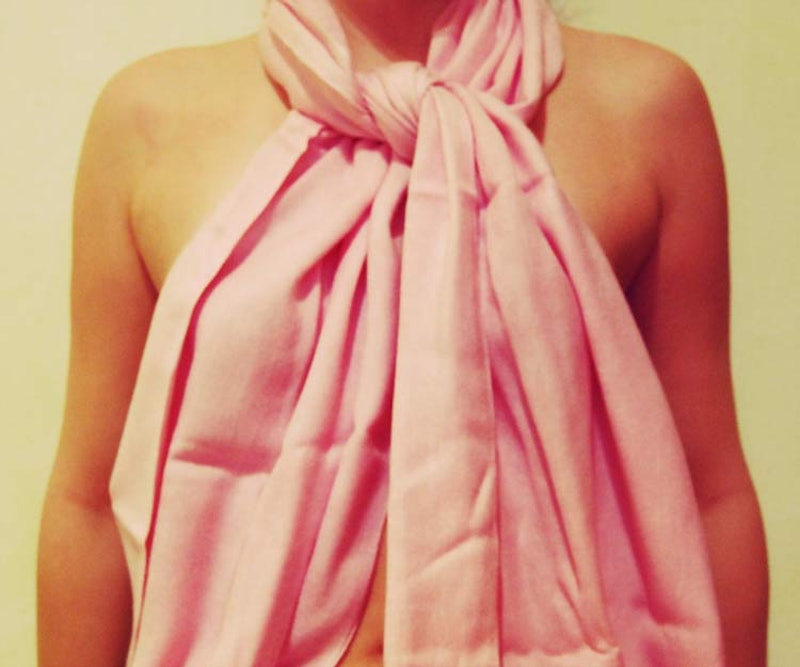 In a perfect world, female nipples would be no more censored than the male variety. Unfortunately, we live in a society where even tutorials teaching people how to check for breast cancer are often considered inappropriate on social media, where most platforms maintain policies restricting female nudity. As a result, breast cancer screening tutorials are likely to be taken down on many websites for depicting female nipples, despite the fact that most people would probably agree breast cancer is probably one of the least sexy topics out there.

However, Argentinian breast cancer nonprofit Movimiento Ayuda Cáncer de Mama (MACMA) has found a truly brilliant way to get around restrictions on female nudity and teach young people how to screen themselves for breast cancer. Rather than using a female model to demonstrate self-examination basics, the organization's most recent video uses a male model — more specifically, his man boobs. Appropriately titled #ManBoobs4Boobs, the video opens with a woman whose breasts are, of course, censored.

"Women's boobs — particularly their nipples — are censored in certain social networks, even when showing how to perform breast self-examinations to detect early breast cancer," a voiceover explains. "But we found boobs that aren't censored: Henry's." Up walks a male model, who allows the woman to demonstrate the basics of breast cancer screening on his uncensored body.

Check out the full video:

According to Indy 100, the video is part of an effort to reach young people, who may not feel they need to start screening for breast cancer yet. "It’s hard to get women over 25 to examine their breasts regularly to prevent breast cancer," a spokesperson for the advertising agency said, Indy 100 reports.

The American Cancer Society emphasizes the importance of early detection; current guidelines suggest that women begin considering breast cancer screenings at age 40 and recommend annual mammograms starting at age 45. However, those guidelines are for women with an average risk of breast cancer — for people at a higher risk thanks to factors like family history, the ACS recommends yearly mammograms and MRIs starting at age 30.

It should be noted that breast self-examinations aren't actually recommended by the ACS or the U.S. Preventative Services Task Force, based on a lack of evidence to support or refute their efficacy. That being said, the ACS points out that it's enormously important for people to be familiar with their bodies so they can notice when something seems off. "All women should be familiar with how their breasts normally look and feel and report any changes to a health care provider right away," the ACS writes on its early breast cancer detection page.

With that in mind, it's clear that #ManBoobs4Boobs is pretty much brilliant — not only does the video serve to highlight the absurdity of censoring nipples based on gender (why is that still happening?), but it also provides potentially life-saving information to viewers. Furthermore, the use of a male model isn't just a clever way to get around social media censors; it's a reminder that men can get breast cancer as well as women.

More like this
Why You're Seeing Green Bandanas At Abortion Rights Protests
By Lexi Inks
34 Quotes That'll Inspire You On Juneteenth & Beyond
By Syeda Khaula Saad and Siena Gagliano
Plan C Vs. Plan B: What's The Difference?
By Lexi Inks
6 Abortion Advocates To Follow On TikTok
By Sara Youngblood Gregory
Get Even More From Bustle — Sign Up For The Newsletter