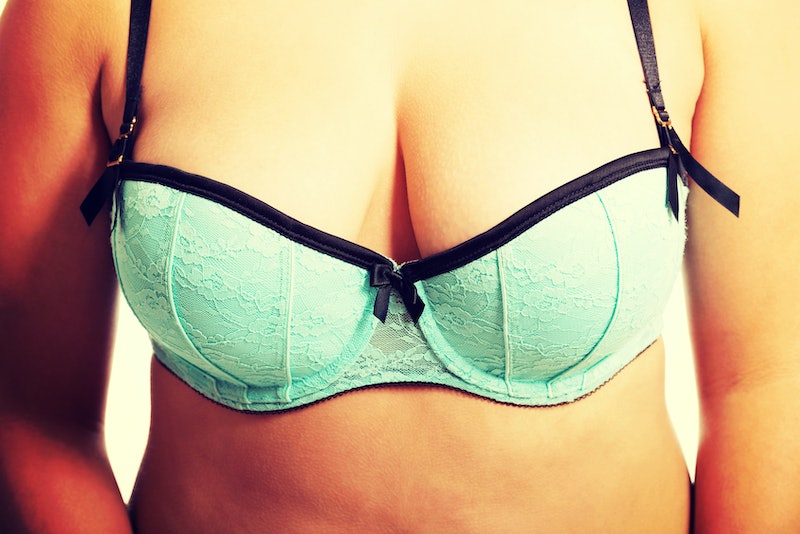 The nipple has been having a bit of a Moment-with-a-capital-M lately. In addition to the undying debate centered around breastfeeding in public, the past few months have seen a resurgence of #FreeTheNipple and Chrissy Teigen's ongoing run-in with Instagram's policy toward nudity. And now, women are Photoshopping male nipples over photographs of their breasts to ridicule double standards in male and female nudity. Social media may be a haven for irritatingly pretentious foodies and the cause of, like, 90 percent of the nation's FOMO (not a real statistic, but you get what I mean), but there's no denying that its users know how to make a statement.

Instagram in particular has had a complicated relationship with censorship in the past. Last year, one artist's photography went viral after a picture featuring a woman with a period stain on her sweatpants was taken down repeatedly, despite the fact that she was fully clothed. The guidelines for female nudity are even more complicated. Like Facebook, Instagram only allows female nipples in the context of breastfeeding or post-mastectomy scarring. Male nipples, however, are available everywhere you look, because ... well, nobody has really articulated that one yet. Maybe whoever is in charge of these policies is a Never Nude and terrified of the sight of nipples? Female nipples will turn the viewer to stone? The government finally found out we can use our breasts to hypnotize others into doing our bidding?

<img width="500" alt="" src="http://25.media.tumblr.com/3e952eecec526aa6ba16b44729608082/tumblr_mhwxkrrYOe1ro49zio1_500.gif" height="285" class="article-body-image"/>On a more serious note, the perception that female nipples are inherently ~sExAY~ is ridiculous, and anyone who stops to think for a second will quickly figure it out. Last year, artist Micol Hebron posted a "nipple template" on Facebook poking fun at this double standard, offering a male nipple for users to paste onto their topless photos, rendering them admissible by community standards. The template has been making the rounds again recently, albeit in a slightly different form:

And women have been using it to manipulate and post their own topless photos. "Don't worry, it's his nipple," one photo reads. Which handily brings me to my next point: What's the big deal?

No, really. What's the difference between male and female nipples? In a time when it's becoming increasingly acceptable to question one's gender identity, it's backwards and petty to declare one person's nipples "acceptable," while another is forced to cover up, simply because someone else decided to view them in a sexual light. As many others have pointed out before, breasts are not inherently sexual organs. I like boobs as much as any other person who is interested in women, but it is possible to see them in non-sexual situations and be able to control yourself. Crazy, right? By forcing women to hide their breasts, we're merely reinforcing the perception that female bodies are shameful. If nipples are so offensive, why aren't we covering up the ones attached to men? In fact, why aren't we doing anything about all those nipple-shaped objects out there, just waiting to seduce us with their suggestive shapes? If nipples are so risque, it's about time we do something about all the salaciously-shaped cucumbers out there. To that end, we've taken the time to paste Hebron's nipple template on a few such objects. Be careful, though — things are about to get pretty sexy.

Phew. Who knew there were so many sexy baby bottles?

All jokes aside, women have enough people trying to police their bodies every day. Do we really need to contribute to that any more than we already do?Images: Fotolia; whatshouldwecallme/Tumblr; Nancy Nance, kartfamily, Stephen Luscher, Jabiz Ralsdana, Shai Barzilay, nerissa's ring, brokinhrt2/Flickr; _beautiful_nightmare__/Instagram; remixed by Lucia Peters/Bustle (8)