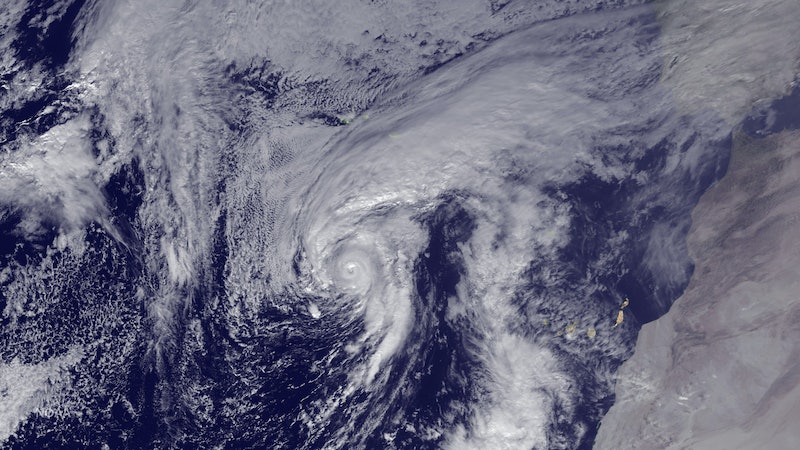 It looks like someone offended the weather gods — according to a recent forecast by the Weather Company, the 2016 Atlantic hurricane season may be the most active since 2012. Hurricane Sandy was far-and-away the most devastating (and costliest) storm of that particular year, but it was far from an isolated incident. According to the National Oceanic and Atmospheric Association, 2012 saw 19 named storms, 10 of which turned into hurricanes and two of which were deemed major hurricanes of category three or higher. Needless to say, 2012 was widely considered an unusually active season, but the intervening years have been much quieter.

However, the respite may not last much longer. According to the Weather Channel, forecasters are, well, forecasting that stormy weather lies ahead. Meteorologists from the Weather Company's Professional Division recently released a report predicting a total of 14 named storms, eight hurricanes, and three major hurricanes during the 2016 Atlantic hurricane season. This is slightly more than the forecasts released by Colorado State University earlier this April; according to that report, meteorologists expect 13 named storms, six hurricanes, and two major hurricanes in the upcoming season, which starts June 1 and lasts until Nov. 30. Both predictions included Hurricane Alex, a rare January hurricane that hit the Azores islands far out of season this year.

It's important to note that although 2016 may be the most active hurricane season since 2012, that doesn't mean it's destined to be a repeat performance. The Colorado State forecast actually classified the upcoming season as average, with a near-average probability (50 percent) of at least one major hurricane making landfall, and the Weather Company's predictions are only slightly higher.

Furthermore, an active hurricane season doesn't necessarily mean any storms will make landfall, and vice versa. As the Weather Channel points out, 1992 only saw six named storms and one subtropical storm, but one of the named storms was Hurricane Andrew, a Category Five hurricane that remains one of the strongest storms to hit the U.S. However, no hurricanes hit the U.S. during the 2010 season, even though 19 named storms formed out to sea. In short, the strength and location of storms are important factors in determining the risk posed by a hurricane season.

That being said, people who live on the coast should always prepare — as Colorado State's report points out, "it only takes one hurricane making landfall to make it an active season." For tips on how to prepare for hurricane season, check out the government's recommendations here.