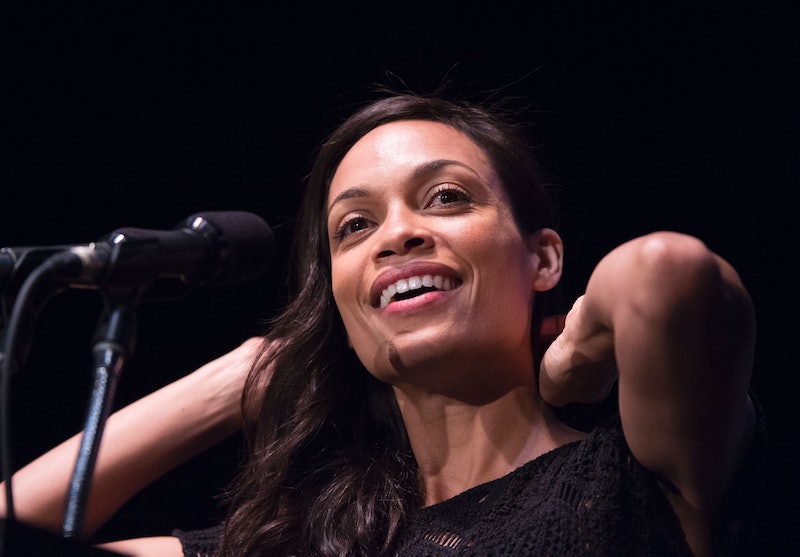 While introducing Democratic candidate Sen. Bernie Sanders at a rally in Delaware on Saturday, actress Rosario Dawson brought up Monica Lewinsky when she accused Hillary Clinton's campaign of bullying supporters of the Vermont senator. Dawson isn't the first person to invoke the memory of Lewinsky, the former White House intern who President Bill Clinton admitted to having an inappropriate relationship with, in an attempt to find Clinton's Achilles heel. The actress' comment — and Sanders' silence on it — has, however, renewed fiery arguments about whether or not Lewinsky is a topic that's off-limits on the campaign trail.

"Real authentic supporters of Bernie Sanders who have opinions and passion are being corrected, targeted, followed online by professionals to quash dissent and manipulate favor," Dawson said in reference to a project titled "Barrier Breaks 2016," which, with hefty financial support from the super PAC Correct the Record, employs a "digital task force" to push back against online anti-Clinton messaging. "We're only in the primaries. Imagine what that will look like in the general election," Dawson continued, likening the activity of "Barrier Breaks 2016" to "some 1984 Big Brother, scary, scary stuff."

"We are literally under attack for not just supporting the other candidate," Dawson said. "Now I'm with Monica Lewinsky with this: bullying is bad. She's actually dedicated her life now to talking about that. And now as a campaign strategy, we are being bullied, and somehow that is OK and not being talked about with the richness that it needs to [be.]"

Sanders has so far sidestepped questions on whether he found Dawson's reference to Lewinsky appropriate. He told CNN's Jake Tapper he felt Dawson "has been a passionate fighter" for racial, economic, and environmental justice on State of the Union when asked about the comment on Sunday. "I have no idea in what context Rosario was talking about her," he said when pressed on the issue. "But I would hope that all of our people focus on the real issues facing working people and the massive level of income and wealth inequality that we have today." The senator emphasized his goal to run a campaign that was driven in an "issue-oriented way, not by personal attacks, but by contrasting our view to Hillary Clinton."

The question is what was Dawson's reasoning for bringing up Lewinsky? Was she looking to draw a comparison between the bullying she feels Sanders supporters are subjected to and the bullying Lewinsky has claimed she experienced after her relationship with Bill Clinton went public? The actress has yet to comment on her intention.

I think it's also valuable to question whether Dawson ultimately used Lewinsky, whose work on anti-bullying campaigns truly is incredible and deserves recognition, as a prop in her criticism of Clinton.

It's hard to argue that Dawson bringing up Lewinsky isn't an attempt to launch a personal attack. If Sanders is really looking to run a campaign that avoids resorting to personal attacks on his competition, he might consider vetting his rally speakers a bit more.