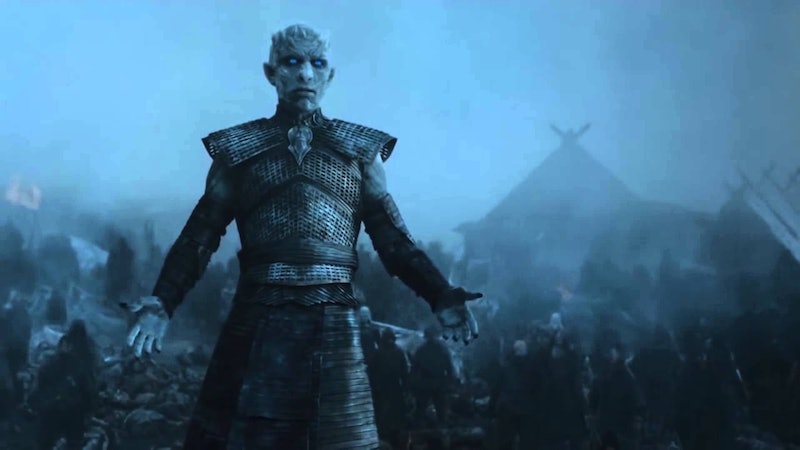 The politics of Game of Thrones are always fascinating. I love watching the Lannister family trying to keep their hold on King's Landing while Dany is off making serious power plays beyond the Narrow Sea, but you know what I like even more than politics? Zombies. It is time for Game of Thrones to start the White Walker invasion of Westeros. I want to see the moment when Cersei, the Tyrells, and everyone else realize that The White Walkers and their army of wights are the real deal. It's going to put the endless "who should sit the Iron Throne" debate into perspective, that is for sure.

In Season 5, Game of Thrones went all in with the White Walkers' undead army in the episode "Hardhome" when Jon Snow and Tormund went beyond The Wall for one terrifying battle with the Night's King and his sizable crew. It was a brilliant reminder that as much as the show is about kings, queens, and underhanded political deals, there is also a whole bunch of ice zombies just waiting to invade the Seven Kingdoms. Right now, the White Walkers are mainly the Wildlings' problem with the Night's Watch finally starting to realize these ice zombies are their problem too, but what about the rest of Westeros?

Game of Thrones loves its disparate plotlines. Arya's off having blind assassin training in the East, Tyrion is gearing up to rule Meereen, and poor Sansa is just trying to escape Ramsay's clutches. I get that everyone has their own stuff going on, but the restraint it must be taking for the showrunners not to just unleash White Walker carnage on all the kingdoms has to be Herculean. The White Walkers are the ultimate threat and once they are introduced to all of the characters, there cannot be any take backs, which likely means the invasion will be part of the endgame.

HBO recently hinted Game of Thrones is in its final stretch. The show has been renewed for Season 7, but there has been talk of two final, shortened seasons to wrap up the series. Even more telling is that Season 6 is designed to wrap up loose ends — according to cast interviews with The Hollywood Reporter — as the story begins to move toward a conclusion.

You know the old saying about how you cannot show a gun in the first act without having it go off by the third? Well, Game of Thrones is in its third act, and it promised a White Walker invasion in the very first scene of the pilot. While I am in no rush for the story to end, I am ready for the infighting to start giving way to cooperation as all of the major families realize they share a mutual threat that trumps their dreams of a crown.

It is important to remember the book series on which Game of Thrones is based is called A Song of Ice and Fire, and if the White Walkers are the ice, then it stands to reason Dany and her dragons are the fire. The sooner the White Walkers push their way into Westeros, the sooner Dany stops wandering around gathering armies beyond the Narrow Sea and finally makes her way home. Her vision in the House of the Undying hinted it would be winter in King's Landing when she finally gets there — and I so want to see Dany charge in with her dragons leading a massive army to drive back the White Walkers and wights. Epicness, thy name will be that final battle.

While a full scale invasion is likely still a long ways off, it is time for Game of Thrones to get serious about moving the White Walkers into place. It only makes sense for the show, Dany, and the endgame. Also, for purely selfish reasons, I want my ice zombie invasion, and I want it to start now.