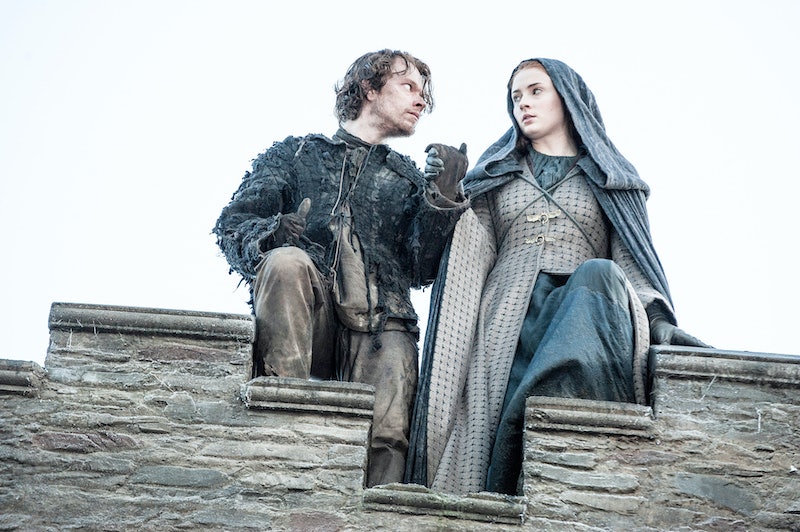 Well, after that Season 5 finale jump into the snow Theon and Sansa are alive on Game of Thrones, but things only got more intense for the pair as they narrowly escaped Ramsay's hounds. Theon may have lost some fans when he turned her alarm candle over to her psychotic betrothed instead of using it to signal for help, but he's certainly winning back some favor in the premiere. After braving freezing water and putting himself in mortal danger by trying to lead Ramsay's men away from her hiding place, he's become the knight in shining armor (or dirty rags... same thing) that we all knew he was. It looks like we have a new couple to 'ship and fans are 'shipping them hard. What will Sansa and Theon's relationship be in Game of Thrones Season 6? I'm finally rooting for someone to deserve Lady Sansa, and, according to Twitter, I'm not the only one.

Fans are voicing their need for a Thansa (nailed it) romance and I don't hate it. After all, they have been through hell and high water (high and super cold water) together. Theon risked a lot for her and when they held hands and jumped off that tower, my heart sang a tune for them just for a second. Who knows? Maybe Sansa will finally get the man she deserves, even if he is missing a vital piece of anatomy, he's definitely preferable over Ramsay.

Guys, I'm into this. I'm ready for some Theon redemption and making Sansa swoon would certainly go a long way in that department. Sure, it may seem like a little bit of a long shot but let's be honest, nothing is too crazy for this show.