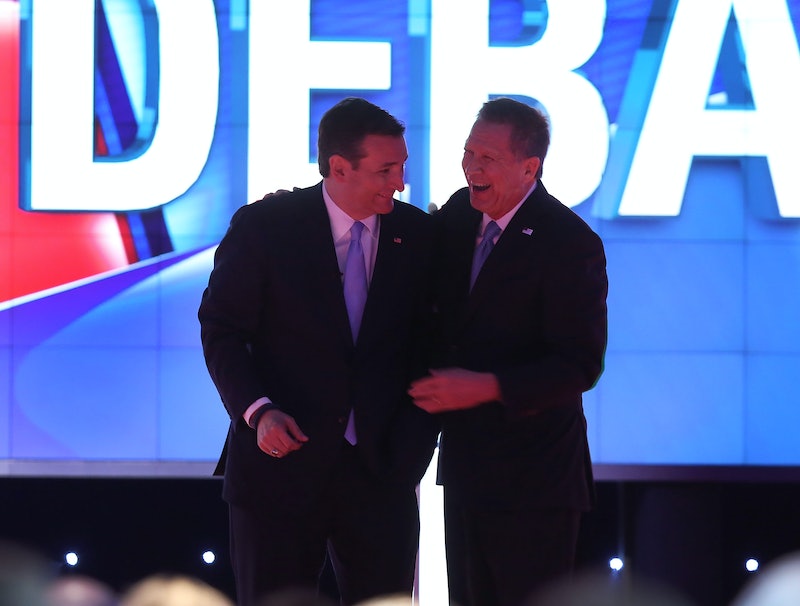 It looks like the two trailing Republican candidates are (sort of, kind of) pausing the mudslinging to unite against the Donald, even if this alliance may be in the most superficial fashion of frenemies. Late Sunday night, the respective campaigns of Ted Cruz and John Kasich announced their shared effort to block Trump from reaching the 1,237 delegates needed to secure the party's nomination. It's not certain how effective this strategy will be — or how it will exactly work — in the long-term, but one big question is whether this means Kasich will be Cruz's running mate if they manage to fend off Trump.

In the short-term, here's how the Cruz-Kasich alliance will work, according to the press releases from their campaigns: Cruz will tackle the Indiana primary on May 3, while Kasich will focus on the Oregon and New Mexico primaries, on May 17 and June 7, respectively. Both of their campaigns made it quite clear that this cooperation was to prevent Trump from nabbing the nomination ahead of the Republican National Convention in Cleveland this July. Cruz's campaign manager Jeff Roe stated of the "divide and conquer" approach with Kasich's camp:

Having Donald Trump at the top of the ticket in November would be a sure disaster for Republicans. Not only would Trump get blown out by Clinton or Sanders, but having him as our nominee would set the party back a generation. To ensure that we nominate a Republican who can unify the Republican Party and win in November, our campaign will focus its time and resources in Indiana and in turn clear the path for Gov. Kasich to compete in Oregon and New Mexico, and we would hope that allies of both campaigns would follow our lead.

In turn, the Ohio governor's chief strategist, John Weaver, was even clearer in conveying the hopes of that Trump would have to face a brokered convention in Cleveland:

Donald Trump doesn't have the support of the majority of Republicans — not even close, but he currently does have almost half the delegates because he's benefited from the existing primary system. Our goal is to have an open convention in Cleveland, where we are confident a candidate capable of uniting the Party will emerge as the nominee.

While Weaver goes on to state, "We believe that [nominee] will be John Kasich," I highly doubt that the Ohio governor — who still trails Marco Rubio, a candidate who dropped out well over a month ago, in delegates — would emerge as the party's nominee at a brokered convention.

However, could Kasich snag a spot as Cruz's VP from this curious alliance? Maybe.

It is said that politics makes strange bedfellows — and this may be the ultimate epitomization of that — but it's often at peak strangeness when both parties have some major potential gains. For Cruz, the advantages are obvious: He needs to block Trump from racking up enough delegates to get the nomination ahead of the convention to effectively survive this election. If he does remain viable into Cleveland, then, yeah, he's got a hope of making it onto the general election ticket.

But Kasich's gain is a little less clear because, barring a bizarre double-abduction of Cruz and Trump, he has virtually no chance of getting the nomination. Helping Cruz doesn't directly help him in his ultimate goal of being the Republican nominee, so why would he help a man who has repeatedly called on him to quit the race altogether?

Well, despite his insistent optimism that he could win the nomination at a brokered convention (sure thing, Kasich), perhaps he realizes that leading Republicans into the general election is no longer an option. However, if he doesn't want to go home to Ohio, the next best way to stay in this race would be to hold his nose and join with Cruz to get his shot at making it to the general election — albeit not as top dog, but as the vice presidential candidate. That may be the best Kasich can hope for — and he very well may know it.