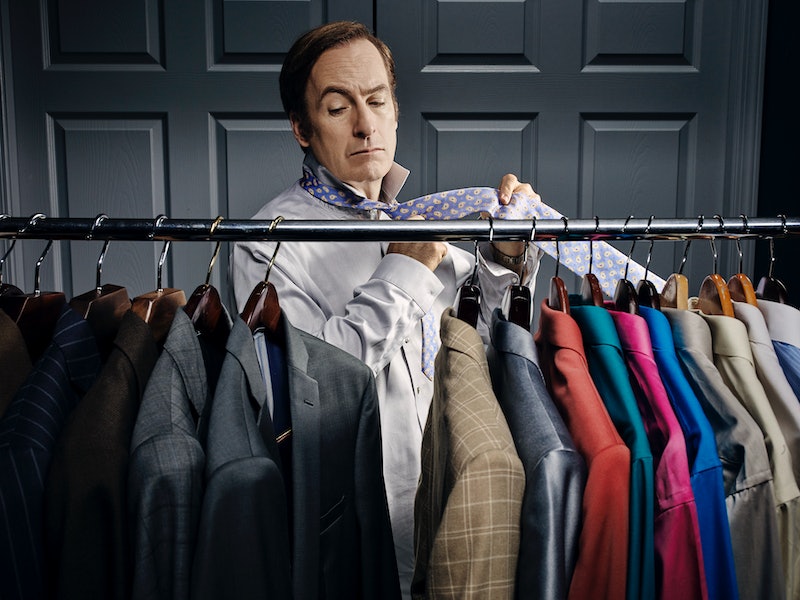 Prequels are ripe material for theorizing; since we already know where the story is going, the only question is how it will get there. Such is the case of AMC's Better Call Saul , the Breaking Bad spinoff that just wrapped its acclaimed second season last week. For two years, the show has defied categorization, forgoing the insane rush of its predecessor for a more deliberately-paced character study sketched in increasingly murky shades of grey. (Better Call Saul is the fine wine to Breaking Bad's blue meth, if you will.) But eventually the events of the spinoff will have to catch up with the events of its parent series — the only question is what shape that will take. What will happen in Better Call Saul Season 3?

When we left them at the end of BCS Season 2, Jimmy had just confessed to doctoring Chuck's Mesa Verde files; Chuck had surreptitiously caught Jimmy's confession on tape; Nacho had figured out Mike's role in the carjacking; Kim had opened her own firm alongside Jimmy; and Mike had targeted Hector Salamanca for assassination only to be foiled by an invisible interloper. What will happen to these characters next? We won't know for sure until about a year from now, but here are some theories based on where we already know things are headed:

It's the moment we've all been waiting for: when James M. McGill will finally slough off the chrysalis of his god-given identity and emerge as the colorful butterfly we all know and love as Saul Goodman. For a show literally called Better Call Saul, it's a bit odd that the eponymous character's name hasn't even been mentioned once in two years. Is Season 3 when this will change? (Third time's the charm, after all.)

Even ignoring questions of the legal admissibility of Chuck's taped confession, it seems unlikely that it will actually result in a disbarment for Jimmy. A disbarred lawyer continuing to practice the law in the very same state — just by changing his name — strains credulity, especially when said lawyer is known for plastering his face all over the place on massive, eye-catching billboards and gaudy, patriotic commercials.

But even if Jimmy doesn't get disbared, it's possible that Chuck will use the tape as leverage to get what he wants: for his younger brother to stop embarrassing him and besmirching the family name. So a compromise is reached, in which Jimmy continues practicing law… but under an assumed identity that won't reflect poorly on Chuck.

Although the BCS Season 2 episode titles hinted at an impending cameo by memorable Breaking Bad villain Gus Fring, the fan-favorite character never actually made an appearance. (And no, his wasn't the cameo cut from the finale, either; that was Marie Schrader, who was originally planned to be Chuck's x-ray technician at the hospital.) But the clever "FRINGS BACK" anagram tells us without a doubt that Gus (or at least one of his goons) is the mysterious someone who left a note on Mike's windshield during the Season 2 finale.

When we first met Mike in Breaking Bad, he was working as head of security for Pollos Hermanos — and personal second-in-command to Gus Fring — so we know that the paths of these two characters will have to cross sooner rather than later. And although we saw Mike willing to trade in his "half measures" for a "full measure" in the Season 2 finale, he never actually got the chance to follow through on the assassination. His association with Gus is undoubtedly what will tip Mike over the edge, and Season 3 will probably be the first time we see the likable antihero take a life in cold blood.

3. Kim Will Partner With Howard

Given that we know Jimmy has to become Saul and we know that Mike has to meet Gus, those are pretty safe predictions to make. However, we have absolutely no idea what will happen to Kim Wexler… other than the fact that she will eventually have no place in Saul Goodman's life. Does she move away? Do they have a falling out? Does she — *gulp* — die? Impossible to say. But one thing that could certainly drive a wedge between Jimmy and Kim is if the latter left the former to go work with Howard Hamlin again.

Say wha-?? Why would Kim ever do that? She just left HHM, after all. This is a pretty wild theory, admittedly, but one that could explain the future rift between the currently amicable partners. Not only did we get the first hint in the finale that Kim will be unhappy with their current set-up — forced to act like a receptionist and get coffee for Jimmy's elderly clients while he ran out on urgent business — but Jimmy's impending legal troubles with his brother can only continue to drive the scrupulously ethical Kim away from her partner-in-law-and-love.

Likewise, Howard probably won't put up with Chuck's shenanigans much longer. He was willing to cater to Chuck's eccentric needs because he was a great lawyer — but now that no longer seems to be the case thanks to that massive screw-up with Mesa Verde. Remember how genuinely jealous Howard seemed to be when Kim told him she was quitting in order to start her own firm? What if Kim, driven away from Jimmy, and Howard, driven away from Chuck, decide to start up their own firm together? Jimmy would certainly see that as a deep, personal betrayal — deep enough that they might never speak again.

4. Chuck Will Completely Lose It

Like Kim, there has to be some event in the future of the McGill brothers' relationship that eventually drives Chuck out of Jimmy's life completely. Given how Chuck pushed himself to the brink of a psychotic episode in his dogged pursuit of Jimmy in Season 2, it's safe to say that his electromagnetic hypersensitivity will eventually get the better of him. I just hope that two things happen before Chuck leaves Jimmy's life for good.

First, I want an answer to what happened to his wife, Rebecca. One of the Season 2 episodes was named after her, but outside of the opening flashback, we never saw her and her name has never been mentioned aloud. (We did briefly see it scrawled in the corner of a piece of sheet music.) What happened to her? Does Chuck blame her absence on Jimmy? Is that why there's such a divide between the brothers?

And second, I would like to hear Chuck admit that Jimmy is a better lawyer than he is. Because that would just be so satisfying.

Ignacio "Nacho" Varga never appeared in Breaking Bad, so it's hard to say exactly where his story is going. (Although the fact that the Salamancas are still around and he isn't doesn't exactly bode well for his character.) But even though we never saw his face in BCS' parent series, we do still have one clue as to what happens to him: the very first time we met Saul Goodman in BB, he was hauled out to the desert by Walt and Jesse and, while on his knees, shouted, "It wasn't me! It was Ignacio!"

Nacho interacted with Jimmy quite a bit in Season 1, mostly around the case of the Kettlemans and the stolen money. But in Season 2, he shared scenes pretty exclusively with Mike and the Salamancas; something will have to happen in Season 3 to bring him back into Jimmy's orbit in order for that Breaking Bad easter egg to make sense. Perhaps, after finally becoming Saul Goodman, Nacho will be one of the first clients the newly-minted attorney will take on, beginning his descent away from legality and into criminality.

6. The Prequel Will End

What's up with those black-and-white flashforwards? Both Seasons 1 and 2 have started with a glimpse of Jimmy's life post-BB, working as a Cinnabon manager named Gene in Omaha, Nebraska. Neither of these flashforwards have proved especially revelatory, and they have never been referenced outside of the opening moments of both seasons. So what gives?

Traditional wisdom would say that Better Call Saul will end when its events catch up to the beginning of Breaking Bad. But what if that's actually only half the story? What if the "prequel" half of BCS ends in Season 3 — with Jimmy becoming Saul and Mike meeting Gus — and then the show shifts full-time into a sequel? We could see how Jimmy/Saul/Gene picks up the pieces after the disastrous events of BB, how he attempts to reconnect with Kim and Chuck (if they're still alive), and whatever happens next.

Abandoning its reliable prequel structure — and thus subverting everything the audience expects the show to be — would be the most surprising choice the writers could make… which is why it's the one theory I would definitely put money on. We'll find out next spring!