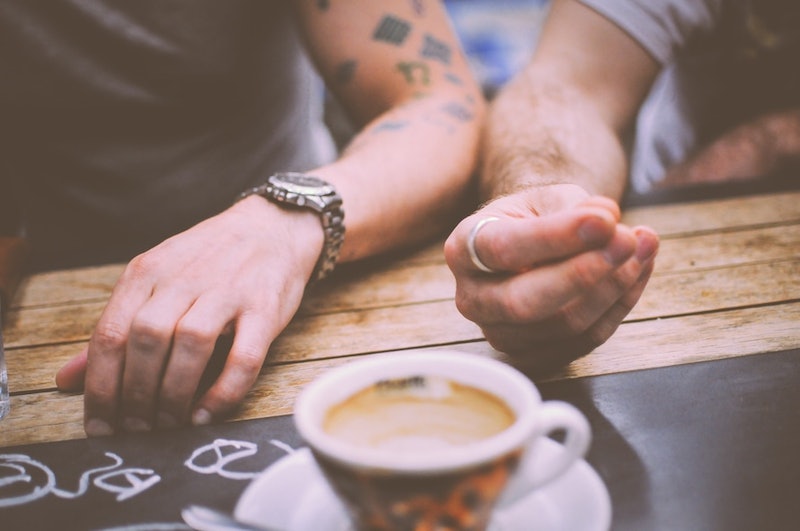 You hope that your relationships are all positive ones, and you hope that they're enduring, but as time passes, you start to notice the familiar patterns and nuances in them over time. But it all comes back to that very first one, and it's not because they were your first love, or because what you had was more special than the others. It's because that first relationship is the first time you met You In A Relationship — the way your behaviors shifted, the ways you reacted to the feelings you had, the way you interacted with someone you weren't obligated to love, but chose to love. And sometimes, You In A Relationship is surprising. Sometimes you'll find that you don't like that person nearly as much as you thought you would, and that first relationship can be a bit of a wake up call. Here are some unfortunate truths you may have to face about yourself in a first relationship, that you carry with you during all the rest:

First relationships are intense by nature, because they're the first! Time! For! EVERYTHING!!!!, and it's all very overwhelming. But after a few weeks of !!!!!, you start to realize that you haven't made progress in the other parts of your life. The goals you had outside of the relationship stall, or seem like a lot less of a priority. It's your first taste of how distracting a relationship can be, if you let it — and when you pride yourself on your independence, this can be a difficult thing to reconcile if you're not actively preventing it from happening.

If you haven't been in a relationship before, there isn't much of a gateway. You ignore red flags and warnings from roommates or your parents because you have this crazy ridiculous attraction to the person that you haven't felt for anyone before, and you can't recognize it as anything but right. If you're unlucky on the first go, this might be the first time you have to evaluate that attraction does not always make for compatibility; that little voice in your head is just as capable of steering you wrong as everyone else.

You May Have To Face Your Own Controlling Or Insecure Tendencies

You May Project An Ideal On Someone That Doesn't Actually Exist

First relationships are usually borne of huge crushes. You idealize the person, put them on an impossible pedestal. It is the first time you have felt this way, so it is by default the most intense, and you have this assumption that you will be fulfilled in every single other possible way — then inadvertently (and unfairly) place the responsibility to fulfill it on them. In later relationships you learn that everything is give and take, and leaning into the imperfection and unpredictability of a relationship is what makes it worthwhile. But a first relationship is when you first realize if you have a dangerous tendency to build people up to something they're not.

Leslie Knope famously declared "uteruses before duderuses," and it's common knowledge that the Friend Code stands no matter who you're dating. You have it in your head that of course you would never let a relationship overshadow your BFFs, but then — ta daaaa! — it does. This is an especially rough thing to learn about yourself in a first relationship, because there is a part of you that is so hungry and excited for all these brand new experiences that it's hard to consider the longterm damage of consistently bailing on your friends. You start to understand why friends have done it to you in the past, and release a little bit of your resentment toward them — but at the same time, you understand that it is a behavior you need to change immediately, both for the health of your friendships and your relationship.

You Realize That, Despite What Hollywood Has Told You, Your Love Is Not Special

The honeymoon phase ends. Those first few months when you are smugger than you've ever been, certain that your love will outlast everyone else's, are like the high of a relationship victory lap — and then you quickly discover that, in fact, you've only just started a very long and steady race. You realize that the love that comes after that is actually comfortable and "boring". But it's your first relationship, so you haven't figured out that that's not just entirely normal, but the best part. You're too busy grieving for the "specialness" of your relationship to understand what you have.

You May Find That You're Not A "Relationship Person" At All

Sometimes what isn't working has nothing to do with you, or the other person, or the feelings you have for each other. Sometimes you'll find that you're just not built for relationships — or, at the very least, you aren't built for one right then. It's hard to have the kind of perspective to understand this in the tumult and excitement of a first relationship, but once you do you'll be able to make peace with it and either be able to recognize when you are ready, or live your best life flying solo.