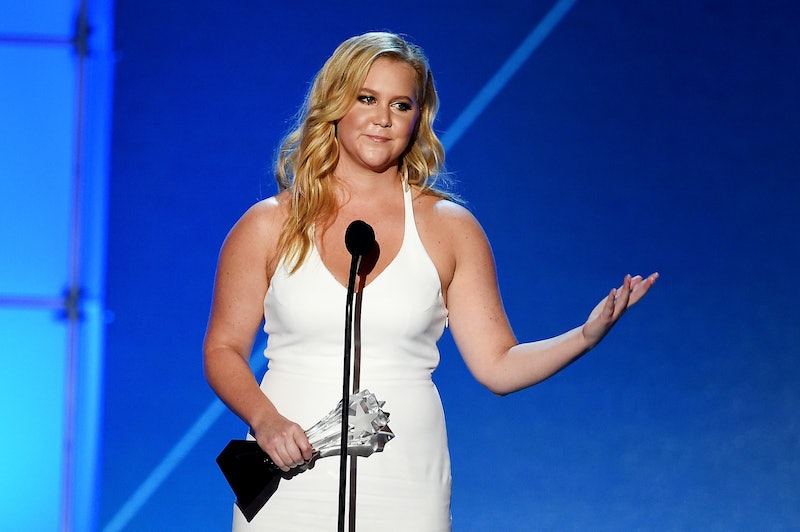 If you've ever seen Amy Schumer perform, you know that she must've had some pretty varied and quirky comedic influences growing up, and now we have a better glimpse of something that molded her sensibilities — Schumer is a big fan of the movie Labyrinth , starring the late great David Bowie. If you've ever seen it, you know immediately why I'd be making the connection between its weird, wonderful sense of humor and Schumer's, but, if you haven't, here's a quick plot breakdown of the 1986 film.

In addition to Bowie, Labyrinth also stars a young Jennifer Connelly as a teenager who makes a wish for her annoying little brother to be taken away, only to have it come true, because this is a world of magic and wonder. And, in order to get him back, she has to solve a labyrinth, thus the title of the movie. Oh, and David Bowie plays a character called the Goblin King, in a full face of glorious makeup and hair that only he could pull off. It's wonderful and amazing, and I'm hoping you all grew up watching and loving Labyrinth, so you don't have to just take my word for it about how great it is.

But, if that is in fact the case, please allow me to add one more inducement to give it a watch, from Amy Schumer herself, who told Vanity Fair she uses the timeless classic to calm down when things are feeling particularly... insurmountable:

I love all the things that I’m doing, but that all my time is accounted for? I’m not Joan Rivers, where I’m like, ‘A full calendar is happiness.’ I would love to do nothing, like waking up and not knowing what you’re going to do that day. The other day I was so overwhelmed I left work an hour early and I just went and watched Labyrinth on my sister’s couch.

And before you start judging her about her taste in movies, just know that Schumer will not apologize for her likes or dislikes, nor should she have to.

It was a big deal in our house growing up. It holds up. I mean, the movie’s weird, but it just felt so good to just lay there, while it was still light out, and watch a movie.

We all have our comfort foods and comfort movies, and it sounds like Labyrinth is Amy Schumer's go-to when everything gets to be too much. Me personally, I go for a big old bowl of macaroni and cheese, so what say you we meet in the middle and make a day of it? I'll clear my schedule, just have your people call my people literally whenever.