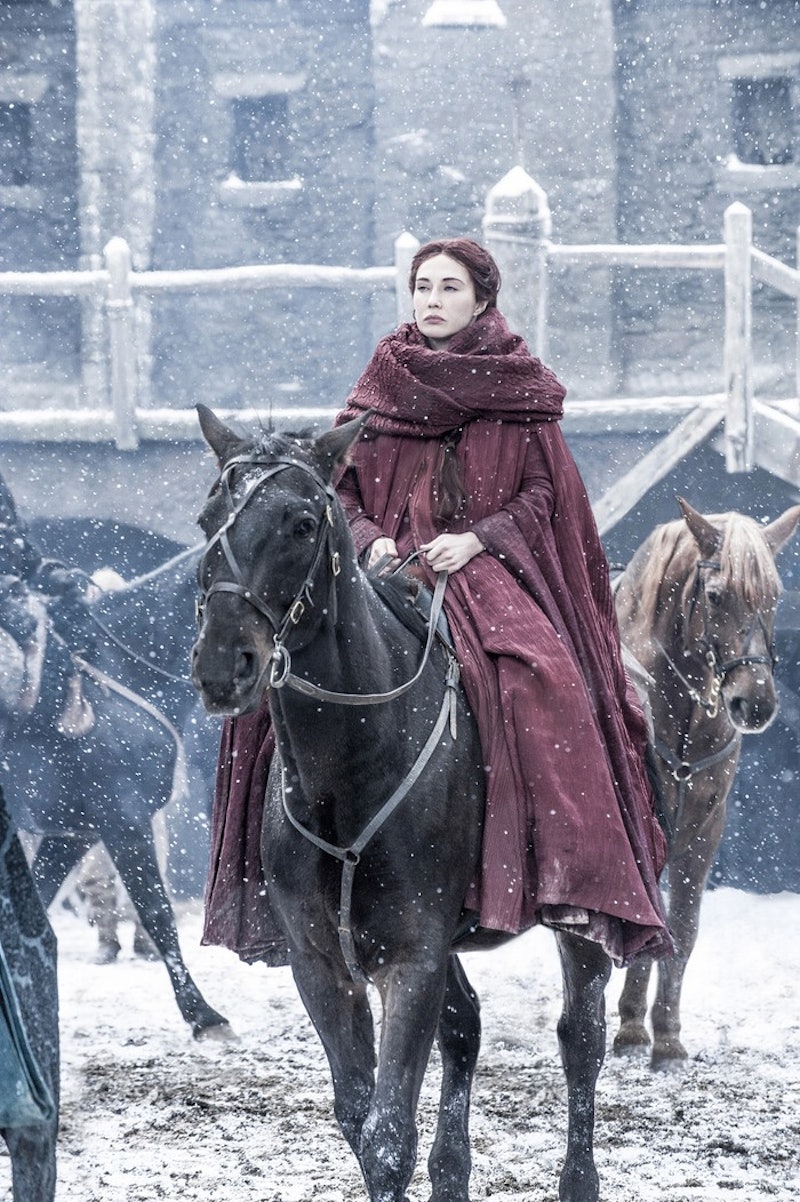 If you're still having a hard time wrapping your head around the fact that Melisandre is actually an old woman on Game of Thrones , then trust me when I tell you that you're not the only one. Each and every viewer took a collective gasp when the Red Woman removed her magical necklace and watched the sands of time shift drastically upon her reflection. So what exactly is Melisandre's necklace and how does it work? That's a question that is still up for a lot of debate, actually.

While some observers may think that the mystical object serves as a type of glamouring charm, allowing the wear to simply shield their true form to the outside world, that may not be the full extent of its power. In George R.R. Martin's novel, Melisandre is at one point given her own P.O.V. chapter, which seems to implicate that she isn't just old, but rather immortal. One line from the book reads: "Melisandre had practiced her art for years beyond count, and she had paid the price," while another section goes on to explain how she doesn't eat and only sleeps for an hour each night.

Is this all due to the power of the necklace or is the necklace merely one facet with which she channels her abilities? As of now, the series is choosing to leave us all guessing.

During a recently interview with Entertainment Weekly, director Jeremy Podeswa declined to comment on how much of a role the necklace plays in the red priestess' powers, however, he did admit that her taking it off is a sign that her faith is being tested. "At that moment, it’s a telling gestural thing to do," Podeswa explained. "She’s questioning her power and ability to prosthelytize. She’s at her lowest point, looking at the mirror and her true self. It’s a sign of her frailty. You’re seeing her at her most vulnerable moment."

However, many fans have been quick to point out the time where Melisandre didn't appear to be wearing the necklace while taking a bath in front of Selyse in Season 4. Is it hidden somewhere else on her, or was she perhaps showing her "true form" to Selyse in that moment, which is why Selyse couldn't seem to look away from her? The possibilities are endless at this point, but given how the gem on the neck glows red and changed color once she removed it, I'd say there's definitely a lot of power hidden within the depths of that jewel.

Maybe it's even capable of harboring a life force within it — one that will eventually be transferred into Jon Snow's body. That way Jon Snow himself will still remain dead (as they've all promised), but Kit Harington's lovely face will still be able to grace our screens.

Like I said, this is all just speculation for now, but I have a sneaking suspicion Melisandre and her mysterious necklace will end up playing a vital role in the war that is to come.