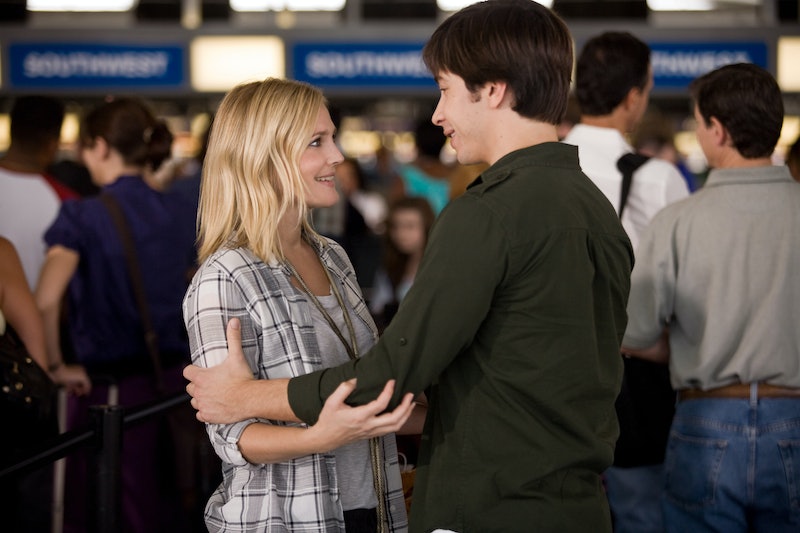 We’re always hearing that we could be having better sex, a better orgasm, or a better relationship. But how often do we hear the nitty-gritty of how we can actually better understand our deepest desires and most embarrassing questions? Bustle has enlisted Vanessa Marin, a sex therapist, to help us out with the details. No gender, sexual orientation, or question is off limits, and all questions remain anonymous. Now, onto today's topic: how to know if you're ready to move long-distance with your partner.

Q: “My boyfriend of one year wants to move back home, across the country, from the East to West Coast (he got a job offer that he’s really excited about, and I know he is really happy to get back to his roots). I think it's a cool idea, but I have a good job and network here, whereas there, I'd have to start over again from scratch. My partner does have his whole family and lots of friends, so maybe some of those connections could help. I think I'm ready for the adventure and I definitely don't want to break up, but are there any questions I should ask myself to make sure I'm making the right decision by following him there?”

A: Thanks for the question! You’ve got a big decision on your plate right now. There are no easy “right” or “wrong” answers, but so many “what ifs”. What if you didn’t follow him and you end up feeling like he was the one that got away? What if you do move with him and you guys break up, leaving you stranded on the other end of the country? It’s easy to spiral into anxious rumination! Here are 12 focused questions to help you think about your decision to move clearly.

1. What Prompted The Decision?

Before we jump into whether or not you should move, I’m curious about why your boyfriend started applying to jobs on the West Coast in the first place. Was it something he talked to you about previously? You guys are only a year into your relationship, so it’s a little premature to be planning all of your major life decisions together. At the same time, a year is still a good chunk of time, and a decision this big should warrant some conversation. If you guys are looking to have a long-term partnership (we’ll get into this later), you should be making these types of decisions together.

2. Have You Been Invited?

This question might sound obvious, but think about it — has your boyfriend explicitly asked you to move with him? Or has he just told you that he’s moving? This question loops back around to the initial impetus for the move. Long-distance moves can bring up a lot of awkwardness in a relationship. Sometimes people don’t have the guts to come out and say, “I’m moving, and I think this is the end of our relationship” or “I’m moving, and I think we should be long-distance.” Or they think that saying they’re moving implies that the relationship is over. If you’re not already clear, ask your partner if he wants you to come along with, or if he had something different in mind.

3. Are You Moving In Together?

Similarly, make sure you’re not making any assumptions about the actual act of living together. Moving across the country and moving into the same apartment are two big decisions in and of themselves, and don’t necessarily have to be made jointly.

4. How Long Will This Move Last?

This is more of a logistical question, but it’s good to know whether your boyfriend is thinking of this as a new adventure or as a permanent move. It might influence your decision if you know he’s just thinking of being there for a year or two versus thinking of it as a long-term thing.

5. How Long Have You Been Together?

Since moving across the country is such a huge life change, it’s important to have a solid relationship foundation. Of course, there is no perfect timeline for moving. It’s not like you’re in the clear the second you cross the one-year mark. In general though, I’d say a year is a pretty solid timeframe. Moving across the country after just a few months together would be a different story.

6. Do You Have Other Reasons For Going?

You said in your email that you think moving sounds cool. It’s important to have reasons for moving other than the fact that he’ll be there. Maybe you’ve always wanted to live on the West Coast, or you like having a sense of adventure, or you’ve got some friends nearby too. Sure, he’s the impetus for the move, but you want to have other things pulling you in that direction too. Again, you’re kind of in an awkward place in your relationship where you’ve been together for a while, but not a super long time. You’re not married, you don’t have kids, your lives aren’t that intertwined. It will put a lot less strain on your relationship if he’s not the only reason you’re making the leap.

7. How Will You Feel Being Dependent On Him?

The reality of moving long-distance with a partner is that you’re going to be pretty dependent on each other for at least a few months. It takes time to make a new place feel like home and to feel a sense of community. Plus, you’re also going to have to find a new job and make friends. It sounds like your partner has a big support network on the West Coast, and you have virtually none. The fact that he’s got so much more support than you do tips the balance and makes you more dependent on him. How do you think that will feel for you? Are you prepared to make more of an effort to plant your own roots?

8. Have You Visited Before?

This isn’t as crucial of a question, but have you been to his hometown before? Do you know what you’re getting into? If you can swing it, it would be great to try to visit before taking the plunge.

9. Do You Have Job Opportunities There?

It takes time to build up a career network. Of course, you’re not going to have the same connections on the West Coast as you do on the East. But are there career opportunities for you there? Is your industry even present in your potential new home? It’s fine if you’re ready for a career change, but it’s important to be honest about your prospects. Think of how much stress not being able to find a job would put on you and your relationship.

10. How Will You Finance The Move?

Who is going to pay for the move? How will you split living expenses once you’re there? What if you don’t find a job right away? These might seem like logistical questions, but our relationships with money are very personal. If you’ve never lived together or shared finances before, you may be about to learn a lot about your boyfriend! Try to hammer out some of the details before you move.

11. Have You Been Through Tough Stuff Together Before?

Moves undeniably bring up tough stuff. You guys are going to have some big conversations, especially if this will be the first time you’re moving in together, on top of moving across the country. Have the two of you been able to work through fights before? Do you have good communication skills? You don’t need to go picking fights with him before moving, but it would be good to have tackled other stuff together.

12. Have You Talked About What This Move Means For Your Relationship?

This is perhaps the biggest question of them all. You have to be on the same page about what this move means for your relationship. Is this a purely logistical move? Is it a step towards marriage or lifelong commitment? Figure out what this move means to you, then ask your boyfriend for his thoughts. Yes, it can feel awkward to ask these kinds of questions initially, but if you can’t communicate about what the move means, you shouldn’t take that leap.

Wishing you the best of luck!