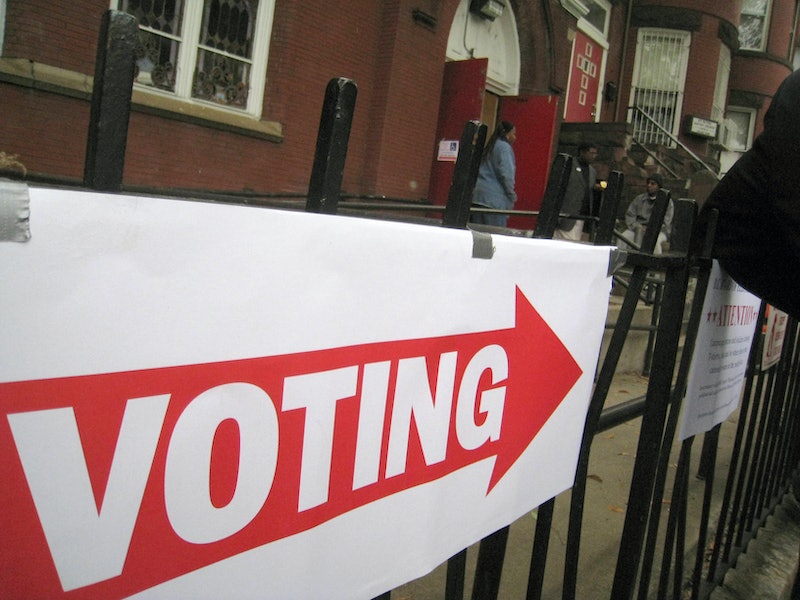 The April 26 primary, known as the Acela Primary, takes place in five states: Connecticut, Delaware, Maryland, Pennsylvania, and Rhode Island. Because there are so many participating in this contest, you might be wondering: When will the Acela Primary end? You should know that even though there are five states voting, they will all run on East Coast time and end at 8 p.m.

Past contests that involved multiple states have typically been called Super Tuesdays, but this is different. These Tuesday primaries are called the Acela Primary because of public transportation, believe it or not. The Amtrak Acela Express, the only high-speed train that operates in the U.S., connects all five states involved. The Acela runs through cities like Philadelphia, Wilmington, Providence, New Haven, and Baltimore — all important polling places in the Acela Primary's participating states.

As voters across these five states go full-steam ahead, it is important to know when exactly the polls close. Although all the states' primaries will end at the same time, there could be delays in the results becoming available.

The Pennsylvania polls will close at 8 p.m. ET across all locations. There are a few things voters should know before heading out, such as how they must make two choices to support their preferred presidential candidate: one for their preferred nominee and one for a local delegate who will support the nominee at the convention.

Delaware polls will close at 8 p.m. ET and the state's primary has proven to be an important one for the presidential candidates. In the weekend before the primary, Donald Trump attracted thousands to the state fairgrounds for an event, and Bernie Sanders also held a rally. On the Monday before, Hillary Clinton held an event just hours before voters went to the polls.

Connecticut polls close at 8 p.m. ET, and some have said that the Connecticut primary is only important for Republicans. Regardless, the Nutmeg State will pay a vital role for both parties in the Acela Primary, as a win there would only help the victorious candidates gain momentum going into the November general election.

The Maryland polls close at 8 p.m. ET, and some are projecting the state could give a huge boost to Clinton and Trump. Maryland's high population of contractors, government workers, and lobbyists might help Clinton beat out Bernie Sanders in the Old Line State.

Stay tuned as the Acela Primary results roll in after the 8 p.m. ET voting deadline on April 26.