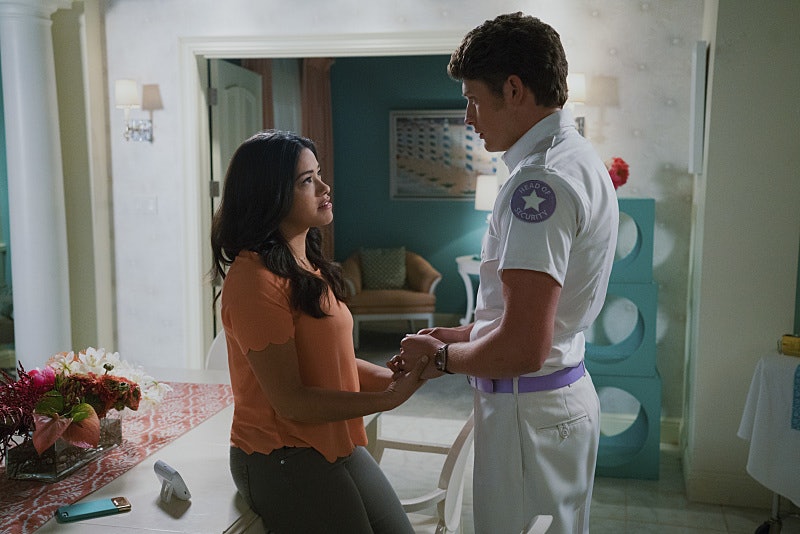 As much as fans are looking forward to a Villanueva wedding on Jane the Virgin, I'm becoming less and less certain that Jane and Michael's big day is ever going to happen. Not because the two of them don't love each other — the show has more than established just how in love they are — but rather due to some terrible tragedy that makes the union impossible. More specifically, I'm referring to the horrific possibility that Michael will die on Jane the Virgin , a theory which Vulture recently posited and, unfortunately, it holds serious weight. I hate to even utter the words, but that doesn't make this depressing prediction any less true. Ever since Jane and Michael have gotten back together things have been perfect... too perfect... some might argue. And considering that this is a telenovela series, a happily ever after seems like a less than likely outcome.

But that alone isn't the only reason I fear Michael's days may be numbered. Last Monday's episode revealed that someone is currently stalking Michael when viewers witnessed an unknown person taking multiple photos of him in a very sinister way. Whether this has something to do with Michael's on-going investigation of Mutter or is just something much less life-threatening, that has yet to be established. Either way, though, it's becoming very clear that trouble is looming on Michael's horizon and could lead to a very grim outcome.

Adding further fuel to the fire is Vulture's astute observation of what the show's narrator said during "Chapter 10" of Season 1. During a conversation with Xo, Michael confessed: "I'm not just going to give up on us. We belong together, and I'll never stop believing that." Initially, that could be taken as just a really sweet sentiment of his undying love for Jane. However, the narrator then proceeded to add his own comments on the matter, saying, "And for as long as Michael lived, until he drew his very last breath, he never did." Was this just an off-hand reference to further prove that Jane will always be his one true love or does the narrator know something that we don't — like the fact that his last breath is coming up a lot sooner than we thought?

Regardless, it was a very cryptic comment to make, and considering it was done so long ago, the odds of it being just a red herring seems kinda unlikely. It would also prove that the writers have known this was coming for some time now, and according to a recent interview with The Hollywood Reporter, nothing they do is ever done at random. "On this show, you have to plan like every inch of it because there are so many, many stories in each episode. You don’t want anything to be random and you want it all to come back and wrap around," showrunner Jennie Snyder Urman told the outlet. "We always start the beginning of the season knowing what the last, really, what the finale is going to be."

That means this stalking twist was introduced for a very specific reason and won't just end up being a throwaway plot device. Something big is going to come from this and it could very well be to Michael's detriment. Even what Jane said during their private wedding vows exchange felt a little ominous. Like when she remarked: "My mom kept telling me to lose control, but I couldn’t until you got here. Because I know you’re watching over me." That kinda makes Michael sound like her guardian angel in the way. Perhaps that's the writers subtle way of hinting that that's exactly what he'll soon become.

And let's not forget how dangerous Michael's job is, in general, especially since he's been working closely with Rafael to track his brother's movements and figure out if he's part of Mutter's operation. Up until now, Derek's managed to evade getting caught (if he really is on Mutter's side), but that doesn't mean Michael's safe by any means. Mutter probably won't take to kindly to find out that a police officer has been poking around her family. She may instruct Derek or one of her henchmen to take him out of the equation for good.

Plus, hasn't anyone else gotten the distinct sense that the show has made Michael a little too amazing this season? He loves Mateo, is always completely understanding of Jane's feelings, and seems to know just the right thing to say at all times. He didn't even get mad when Jane wanted to remain close to Rafael for Mateo's sake. He's just too wonderful. And whenever a character gets put on such a high pedestal, it's usually done to make their loss all the more devastating to viewers.

Do I hope that I'm wrong about this? Of course! I've been Team Michael since Day 1 and hate the thought of him no longer being around. (And hey, there's always the chance that he'll just be seriously injured, not killed, in order for the wedding to be postponed.) But if all this evidence is any indicator, the series may be setting us up for our most heart-wrenching goodbye yet.

More like this
Woodstock Co-Founder Michael Lang Faced Several Lawsuits After The 1999 Festival
By Brad Witter
Dr. Anna Pou Is Still Practicing Medicine After Facing Murder Charges
By Brad Witter
‘Stranger Things’ Stan Megan Thee Stallion Grilled Natalia Dyer About Nancy & Steve
By Brad Witter
Reese Witherspoon Got Hooked On ‘Never Have I Ever’ After Son Deacon’s Debut
By Stephanie Topacio Long
Get Even More From Bustle — Sign Up For The Newsletter