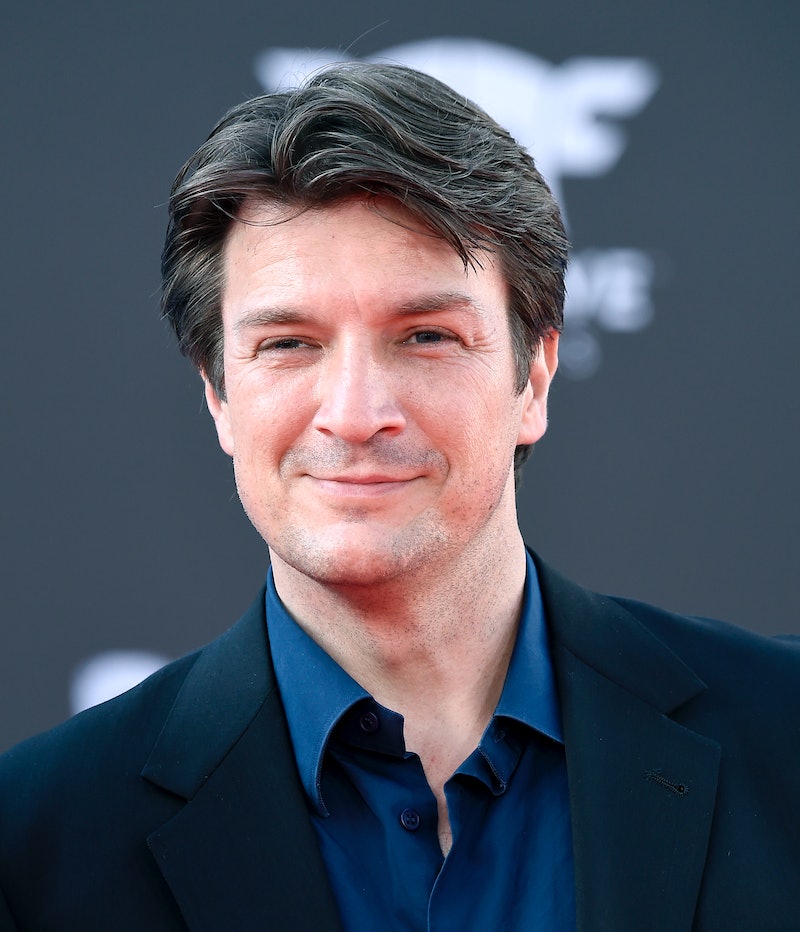 Part of the joy of the seemingly indefatigable Marvel Cinematic Universe is seeing some of your favorite movie and TV stars pop up in unexpected places, often wearing unexpected wigs and sporting unexpected accents. Well, the newest celebrity to join the roster of the MCU is Castle star Nathan Fillion, best known in sci-fi circles as Captain Mal Reynolds from the short-lived cult classic series Firefly. According to comicbook.com, Nathan Fillion will cameo in Guardians Of The Galaxy Vol. 2 as a character named Simon Williams.

This exciting revelation came in the form of several set photos that reveal Fillion's face on a number of fake posters outside a movie theater touting the "Simon Williams Film Festival." Yes, Fillion is an actor in several movies-within-the-movie, including a romcom titled Oh, Rebecca!, a Conan-esque fantasy titled Arkon, and a biopic titled Tony Stark — the poster of which is an obvious riff on the marketing campaign for Michael Fassbender's Steve Jobs. (This latter faux-film is the most interesting since, if someone's making a movie about adult Tony, then this scene must take place near the present day rather than as a flashback to Peter Quill's youth. Will the Guardians be venturing to Planet Earth in Vol. 2?)

So who is Simon Williams? Fortunately he's a character from the comics, so we already know plenty about him. Introduced in 1964 in an issue of The Avengers, Simon is a rich and talented actor who, thanks to some ionic energy treatments given to him by Baron Zemo (the villain played by Daniel Brühl in the upcoming Captain America: Civil War) becomes the superhero known as Wonder Man. Originally sent by Zemo to infiltrate and betray the Avengers, Wonder Man switched sides and joined them instead. (He even joined up with the Guardians of the Galaxy a few times.)

Does this mean that Fillion is being introduced as Simon Williams in Guardians Of The Galaxy Vol. 2 before officially joining the team as Wonder Man to help take on Thanos in Avengers: Infinity War and possibly even getting his own spinoff solo franchise? Not so fast. Before you get too excited, let's remember that this isn't actually Fillion's first appearance in the MCU. He also cameoed in the first GOTG movie back in 2014, voicing the hulking blue "Monstrous Inmate" who briefly confronted Peter Quill in the Kyln before being taken down by Groot.

It's far more likely that Fillion's second cameo will be just as subtle as his first than that he's being set up for a major role in the already over-stuffed Phase 3 finale. There's a chance that the actor himself might not even appear onscreen; his only contribution to the movie might be his face on those fake movie posters. But the fact that they gave him the name of a real Marvel superhero — rather than just "Monstrous Inmate" — seems to at least possibly indicate that this cameo will amount to more than Fillion's first.

While I wouldn't personally get too optimistic about Fillion's Phase 3 future, pretty much all bets are off when it comes to the super mysterious MCU Phase 4. So far, Guardians Of The Galaxy Vol. 3 is the only film officially confirmed for the post-Infinity War era of the franchise, and Marvel will likely be looking for new heroes to replace the old guard like Iron Man and Captain America. Who better than Fillion as Wonder Man to usher the Marvel Cinematic Universe into its next phase?