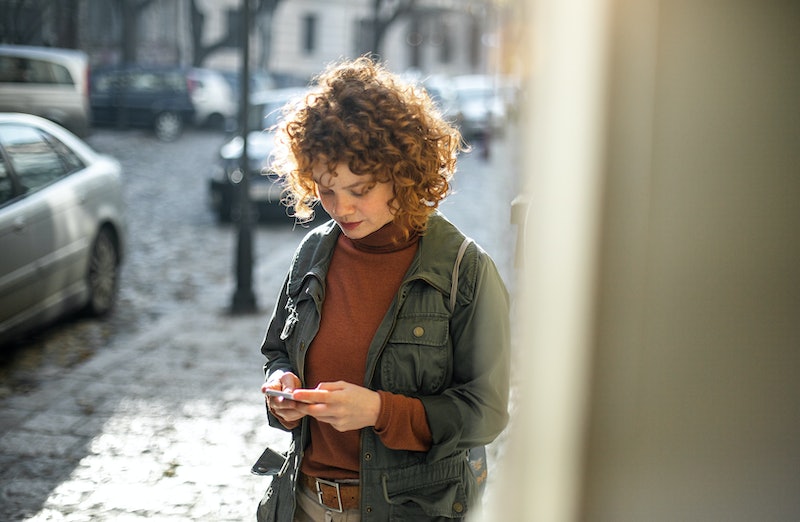 Ever since I decided to delete my dating apps for a month as part of Bustle's App-less April challenge, I've been fielding a lot of questions. Do I miss my dating apps? Am I experiencing dating app withdrawal? Have I been going on any dates? Do I sit at home all by myself on Friday nights with nothing to do? Will I re-download my apps once the month is over? Is it harder to be single without apps? Do I still have fun? Am I bored? Am I relieved? Am I OK? Will I be OK? Do I promise I'll be OK? As a fervid dating app enthusiast, it was kind of touch and go there at the beginning.

Many people who I talk to — most of whom have experienced firsthand the struggles of dating app fatigue themselves — think that App-less April is the greatest idea in the world. Others tell me they don't think they'd ever be willing to give up their dating apps for 30 whole days. But, no matter which side of the divide these curious minds fall, everyone wants to know one thing: am I meeting anyone in real life ?

People have joined Bustle's App-less April challenge for a number of reasons. For some, the whole point is to unchain themselves from the safety net of their apps, and meet a living, breathing human they didn't have to swipe right on in order to facilitate a coffee date. Others just wanted a little bit of a dating app detox — which makes sense, when you consider that almost 80 percent of Millennials currently on dating apps say they spend two hours using them a week. That's a lot of time to devote to anything, and while apps can be a great experience for some people actively trying to meet a potential partner, it can also be refreshing to disconnect, whether that's for a few days, or a few weeks. As relationship expert Francesca Hogi tells Bustle, it's a good move to take a step back from your apps once in a while. "If you're feeling depressed or bored with your experience on the apps, you're unlikely to be in a good mindset to be successful anyway," she says. "Eliminating that source of stress will give you some good breathing space."

Personally, I decided to delete my dating apps because I realized I was no longer taking them seriously. I had come to view my apps as a way to kill time racking up matches than as a legit way to make any sort of meaningful connection with somebody. I was going on plenty of first dates with people I met through Tinder and OkCupid, but I would rarely follow up with them. In my mind, there was no need to go on a second date when I could just hit up my apps and see who else was out there.

Meeting people in real life — as in, without any help from apps or dating sites — is not unheard of. It's true that most single people I know who are currently dating around usually have at least one app that they like to use, but the fact is most people are meeting their matches IRL. According to a poll by Pew Research Center, only five percent of people currently in a committed relationship say they met their partner online, while 88 percent of couples who have gotten together in the last five years say they did so offline. What's more, Pew also found that almost a third of people who do regularly use apps say they've never actually gone on a date with anyone they've met online.

So, if we're not even meeting any of the people we connect with through this type of technology, what's the point of having apps in the first place? I've used the last few weeks to contemplate that very question — and to see if getting off my apps might help me rethink the way I use them. My goal for App-less April isn't necessarily to meet more people in real life, but I've definitely learned a few things about how having apps constantly at your finger tips affects your real-life relationships. Here are a few takeaways.

As someone who's a chronic chatterbox, I find myself magically tongue-tied whenever I'm in a situation that requires me to go up and approach a complete stranger in a social setting. In order to get around this, I've started to treat these exchanges like I would a Tinder interaction. After all, I have no qualms about sending a first message via a dating app to someone I've never met before, and while the stakes might seem higher when you're talking to someone face-to-face, the circumstances are actually pretty similar. I don't melt into a puddle of anxiety saying "hi" to someone online, and there's no reason why I should in real life, either. I mean, it's a pretty neutral conversation starter.

Lori Cheek, founder and CEO of Cheekd, agrees. Even if you aren't trying to meet someone romantically, getting into the habit of saying hi to people you don't know can help you build confidence. "While running your daily errands, at a cafe or on your morning commute (whether it be on a train platform, parking your car, or even waiting to cross the street), force yourself to smile at the intriguing stranger next to you and simply utter the word 'Hi.'" she tells Bustle. "You really have absolutely nothing to lose except an opportunity."

2. It's Important To Actually Listen To What People Are Saying

For one thing, I can't go back and reference that person's dating profile to see what their interests are, so I have to, you know, pay actual attention to the person in front of me as they try to explain why Pulp Fiction is the greatest movie of all time.

More importantly, without my phone out in front of me 24/7, I'm not as distracted as I used to be — I can truly focus on what someone is saying. And, that's a pretty important habit to pick up. "Unplugging is a great way to practice being mindful of your surroundings and really diving into whatever you're doing in the moment." Janna Koretz Psy.D, licensed psychologist and founder of Azimuth Psychological, tells Bustle. You're already dealing with a zillion emails, Instagram notifications, and text messages bombarding your phone. You don't need to worry about dating app notifications when you're out on an actual date.

In fact, that's been one of the best parts about disconnecting from dating apps — and really my phone in general — for a month. I can give people I go on dates with my undivided attention. That type of mindfulness has helped me initially get to know someone on a deeper level than I might have in the past — and get a better idea of whether or not this is a romance worth pursuing.

3. First Dates Are Always Going To Be Awkward

When I was going on first dates with people I met via dating apps, I was pretty quick to brush them off if I didn't feel an immediate connection. I figured it was pointless to go out with someone again if we didn't instantly have 10 different things in common, because there was a whole pool of other people to swipe from. But, I've come to realize that awkward first dates are inevitable — and that second dates can surprise you. This month, I've been making it a point to follow up with the people I go on dates with, and I've been amazed to discover that, once we get past all the uncomfortable small talk, some pretty epic conversations can happen.

4. Just Because You Met IRL Doesn't Mean You'll Instantly Have A Connection

Every so often, I'll entertain a brief daydream where I'm sitting on the subway minding my own business, when a cute stranger sits down next to me, engages me in witty banter for the duration of my ride, and then asks me for my number as we pull up to my stop. In my mind, we go for a drink, that person ends up being the love of my life, and we live happily ever after. The end.

Although meeting someone through dating apps is hardly as stigmatized as it may have been once, some people still assume that the connection you make with someone offline is instantly going to be stronger than if you had met randomly through an app. In my experience, that's not the case. There are a lot of different factors that contribute to chemistry — how you meet isn't necessarily one of them. Meeting someone serendipitously on the street as you both go to hail the same cab might sound like something right out of a rom-com, but it doesn't guarantee you've found your perfect match. That person may have good timing, but they could also end up being boring AF.

Of course, these are just lessons I've personally picked up this month during my mission to live a dating app-free existence. I will probably re-download my dating apps come May, but so far I've found this exercise useful. At the very least, it's making me a better listener — and that's an important skill to have that extends way beyond my dating life.

More like this
The Best Time To Date After A Breakup, According To Experts
By Bustle Editors
Hinge's New NFAQ Feature Is Demystifying Queer Dating
By Emma Carey
7 Women Share Their Best Orgasm Stories
By Lexi Inks
Expert Tips For Being On Top When You're Plus-Size
By Lexi Inks
Get Even More From Bustle — Sign Up For The Newsletter