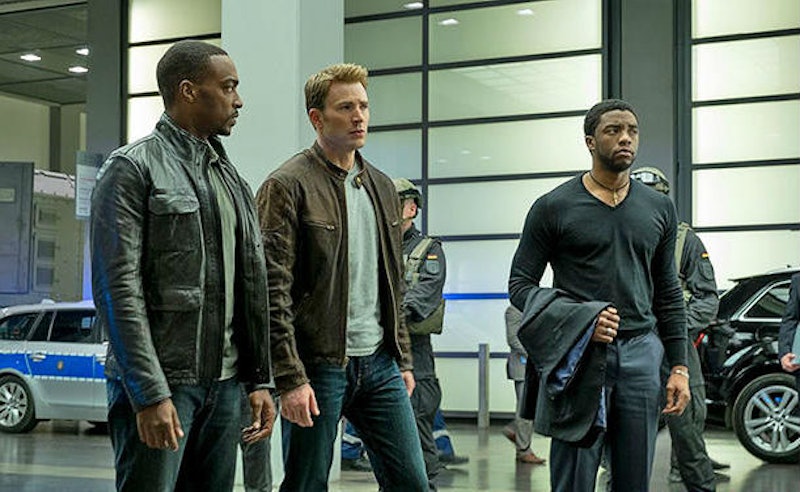 If there's one thing Marvel movies are known for, besides dominating the box office, finally giving superheroes consistently good material to work with, and just being generally awesome, it's their post-credits scenes. Although Marvel didn't invent this type of scene, they've certainly mastered it, and Marvel fans have been conditioned to sit through endless credits in the hopes of catching either a glimpse of what's coming next or seeing a clever joke. Captain America: Civil War has a post-credits scene, of course, continuing the tradition, but what does it entail?

In the grand scheme of things, the first Civil War post-credits scene (there's a second, less substantial one at the absolute end) really isn't as high stakes as some of the other post-credits scenes that fans have seen. There are no new heroes introduced like in Ant-Man or Captain America: The Winter Soldier, and there's no Thanos threatening to take over the universe like in the first two Avengers movies. Nor is the scene a funny one, like the infamous shawarma scene from The Avengers or the Bruce Banner/Tony Stark therapy session from Iron Man 3. Instead, the scene serves as a tease for an upcoming Marvel movie, while also wrapping up a couple of loose ends from the film. Here's what happens. Spoilers to follow.

Toward the end of the movie, Iron Man gets into one final fight with Captain America and the Winter Soldier after he learns that the latter killed his parents. Things get out of hand, and in the heat of the battle, Iron Man blows off the Winter Soldier's metal arm. Cap and Iron Man continue to fight, and Cap wins. With a chance to kill his fellow Avenger, Cap instead shuts down Iron Man's suit, and they go their separate ways. Later, at the Avengers compound, Tony Stark receives a letter from Cap, telling him that he can have the Avengers, but he's not going to forget about his friends, AKA the members of Team Cap who are currently in prison. The film ends on Cap showing up at the prison to bust his fellow heroes out of jail.

What the movie doesn't resolve is what happens to Bucky after losing his arm. He's still a fugitive, and he's not much good in a fight with just one arm. So what's he to do? Thankfully, the end credits scene clears this up. In the scene, Cap takes Bucky to Wakanda, the home of the Black Panther, where T'Challa has agreed to take him in as penance for wrongly blaming him for his father T'Chaka's death.

Bucky decides the best thing for him to do is to freeze himself again, so he'll stop causing problems for Cap and others. Bucky goes into his cryogenic chamber, and Cap and Black Panther have a brief conversation where Cap warns T'Challa that he is putting himself at risk by housing Bucky in his compound, telling him that people will come looking for him. T'Challa responds, "Let them come," and the camera pans outside showing the technology-laced jungle stronghold that is Wakanda, and ending on a killer black panther statue.

So the Civil War post-credits scene not only shows what happens to Bucky, but it also sets up the Black Panther movie, giving fans their first glimpse at Wakanda. And trust me, it looks awesome.