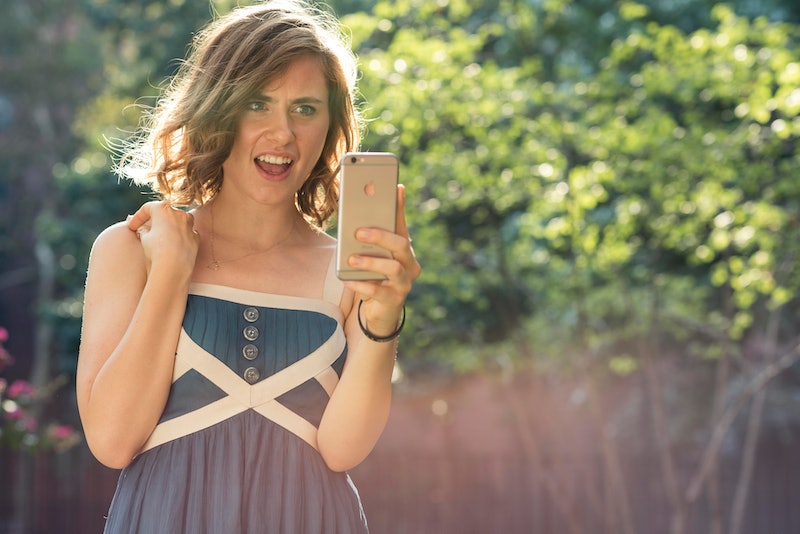 I write about feminism on the internet, so to say that I regularly get Twitter hate does not even begin to cover it. Fortunately for me, I don't generally feel like I am in danger due to it —no threats of violence yet — but still, I've been the subject of anti-feminist blog posts, had hate videos tweeted at me, and received the kinds of tweets that make you need to go for a long walk. So when your Twitter feed starts to blow up with negative tweets, particularly the anonymous, abusive kind, I have some suggestions, based on how I deal with it.

Let's make no mistakes: online abuse hurts. It may be happening behind a screen, but it still constitutes an attack, and is designed to provoke, insult and denigrate. You are not weak if it upsets you, and you do not have to listen to anybody who snorts and tells you to ignore it and "stop letting them get to you." If strangers shouted abuse at you on the street, you'd feel threatened and upset; aside from the physical element, this is pretty much the same thing. It's a widespread problem, but Twitter — along with Tumblr, Weibo and other quickfire social networks — is one of the prime offenders. So if you come in for an attack of trolling, whether it's because of something specific you've done or published, or just because you happen to be existing on the internet, what can you do?

First things first: take a deep breath. Cry if you need to. Take a break. And then take a walk through some possible strategies, to figure out the best way forward for you.

Wars of words are so easy on Twitter. You can back-and-forth in 140 characters with the swiftness of a tennis match, and things will very rarely go any direction other than "downhill." I'm not a universal proponent of the rule "don't feed the trolls," as sometimes direct confrontation and calling out can do a good service. (And occasionally, people have the wrong facts, in which case it's acceptable to correct them.)

But giving your entire attention and emotional energy to an argument with somebody you don't know, particularly if they're being personal rather than keeping things civil, is not a good idea.

2. Remember That The Other Person Is Real

Chances are that if you're getting Twitter hate, the person on the other end of the keyboard has forgotten the key thing about arguments: always remembering that the other person is a real person with real feelings and opinions. (The anonymity of the internet makes this a particularly easy psychological trap).

Don't do the same to them. If you want to enter an exchange, you may make more impact by talking to them like a person — even a terrible person with bad opinions — and not just a rage-bot. (Unless they are a rage-bot, in which case, you can block them.) Note that I only said "may." Entering into dialogue on Twitter about hot-button subjects always has the potential to devolve into a shouting match. You have the right to approach the situation any way you like, and that includes ignoring it, as well.

3. Step Away From The Laptop

I'm not doing the "Twitter doesn't matter, go look at the flowers and realize what's REALLY important" thing with this advice. What's said online really does hurt, and it's false to pretend that it doesn't merely because it's channeled through avatars and feeds.

I'm just advising separation, a chance to allow yourself to calm down, as you may have entered a fight-or-flight state in which adrenaline is pumping, your heart rate has risen, and you're ready to fly off the blocks. You may well discover after your break that you don't actually care all that much, which is cool. But if you still do (which is definitely acceptable), you might be able to explain what hurt you or have the argument while experiencing less stress.

If the people arguing with you get into name-calling and stupid stuff, the best possible thing you can do is be the adult. Because it makes them look like an idiot. Remember Beyonce: "always stay gracious, best revenge is your paper." (Although Beyonce knows how and when to get angry, too. Witness the entire first half of Lemonade.)

Channel your primary school teacher. Let them have the tantrum, even though you're genuinely hurt by it, and calmly express why it's sh*t before you take your earrings off and dive in. And keep it all a matter of public record; DMs are a chance for things to get rapidly upsetting very fast.

5. Record All Harassment And Block

If you're being particularly heinously targeted, use what's available to you. Report the user to Twitter, and block them and anybody in their circle from contacting you. Before you do, take screenshots as proof. Unfortunately, the law about online harassment is rarely effective; for every story about somebody being taken in by the police for being an a**hole on Twitter (witness the guy who was arrested for his "mealy-mouthed response" tweet after the Brussels terrorist attacks), there are many where the police can't (or won't) do anything effective.

And Twitter itself has been criticized for not offering users enough tools to cope with and fight online abuse, though it does seem to be trying; but right now, it can take up to three weeks to block an account, in part because the troll problem seems to be so intensely widespread. (A 2012 study found 15,000 of the thousands of tweets sent daily could be classified as bullying, and that number has doubtless only risen since then.)

I've found this particularly helpful when dealing with online harassment via Twitter: disconnecting notifications from my email account. That way I don't get a spike of annoyance or dread when my phone pings to let me know somebody's contacted me. This enables you to have more control over the situation. If you choose to access your tweets after doing this, it's your decision; you're not being constantly bugged by reminders that you're being contacted.

7. Consider How You Want To End Things

Deciding that you're done with engaging with negative tweets and abuse doesn't mean that they'll stop, of course. But you can consider a few strategies for trying to end your part of the interaction — strategies which can include going offline, replying in kind, or trying to kill 'em with kindness.

Yep, I said "kindness." Of course, if you defend yourself or respond in whatever way feels right, or you just turn off the computer and do something else, you've done what you need to do. But in case you're curious: in an investigation for Bustle last year I looked into the possible value of kindness to trolls, and found that some believe there's value in meeting mindless rage with empathy and humanizing, in part because it's seriously hard for people to keep yelling if they recognize there's a real person listening to them. Unfortunately, despite offering a few positives, this approach still has a lot of drawbacks.

For one, there's the prevailing cultural expectation on women to be understanding, "nice" and polite, even in the face of deep hatred and awfulness; being kind in response to trolling may play into this gendered structure. And for another, it can end spectacularly badly. That method isn't for everybody. You need to be a particular sort of person to be interested in and capable of responding to internet bile with compassion (I am not that sort of person), and it can be damaging to try if you're not.

So know that you aren't a failure as a person if you can't act like some kind of forgiving saint on social media. You're dealing with an awful problem that shouldn't exist, and no matter how you choose to respond to it, know that you have the support of so many other people online who have gone through the same thing.