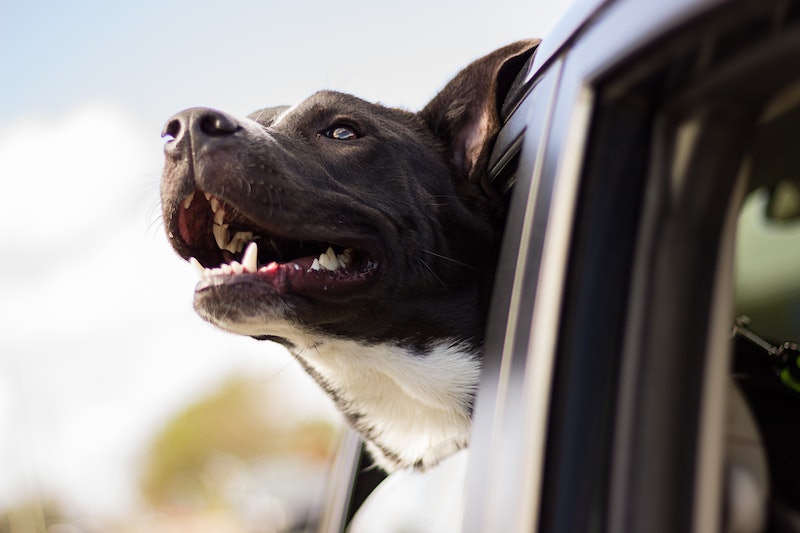 Half a year ago, I adopted a cat named Eglantine (though everybody calls her Eggy). She is gradually learning to jump again after months in a cramped shelter run and years overweight. She quite likes sleeping on my head. And at nearly nine, she's classified as a senior cat. When we're researching adoptable animals, it's easy to get distracted by the flurry of cuteness accompanying puppies and kittens, and forget about the mature specimens available for rehoming in shelters. However, a young animal is not suited to everybody, and an older one can be the best possible fit for people with certain levels of experience and requirement.

Getting a senior animal is a bit like getting into a relationship with somebody mature: they know what they want, they're well-trained (most of the time), they're educated, and they're much more likely to want a nap instead of running around causing destruction. The price for this maturity is often medical bills, but for various reasons, including medical insurance for seniors and animal life spans, that's not as big a bogeyman as it's sometimes made out to be. And, at the risk of sounding like a complete sucker, who doesn't want to give an animal a second (or third) chance at a forever home, where they can knead all your best sweaters and headbutt you ardently at 3 a.m.?

If you've been scared away from getting an animal with the senior label, look again. They're great. They will slobber on you, teach you, and adore you. It's one of the best things you'll ever do.

This is one of the biggest advantages of adopting an older domestic animal: it's far, far more likely that they'll have had training, either from a previous owner or from the people managing their shelter. This includes everything from toilet training to tricks to responding to various cues.

One of the most complicated parts of having a young animal is the training process, and while any new animal in your house will need to have a new education (where things are, what your specific rules about scratching or play are, what your personal routine is), the foundation of knowledge an older animal brings with them can be a massive benefit. If they have bad habits, you'll have to work to replace them with better ones, but the fact that they'll already know what training is will likely be a massive help with that.

This also means that their needs are different. A small animal is a big time commitment; an older one, depending on its needs, might be more independent and capable of chilling out, though it will always need interaction and care, of course. Older animals often need more sleep and shorter walks or playtime than younger animals. (However, you cannot get a senior animal if you want something with extremely minimal needs. If you can't devote real time to an animal, then having an animal is not for you.)

2. Their Personalities Have Developed

One of the wonders of owning a small animal is being uncertain about how they'll develop and what kind of grown dog/cat/rabbit/ocelot they'll grow into. However, if you need a bit more surety (a cat who won't scratch your kid, a dog who isn't prone to eating your shoes or his own poop), an elder animal is likely the way to go. Even if their background isn't known (some shelter animals come in as strays), they'll likely have more settled personalities, from the extroverted to the chilled-out, and that gives you something more definite to work with.

3. They're More In Need Of Rehoming

People don't think about senior animals when they think of new pets. It's a harsh truth, but it's accurate. The typical narrative about pets is that you get them from the beginning to the end of their lives, but there are many other ways in which the story can go: our cat, for instance, belonged to a woman who died tragically (and was left alone in the house with her for a while before her body was discovered). People sometimes need to give up animals because they're moving or can no longer care for them; pets sometimes run away and can't be returned because of a lack of ID. And so animals who could have been with one owner all their lives come back to the shelter to wait out the end of their lives for a new one.

People resist senior animals for various reasons, but a particular one seems to be a fear that they're not going to be the "best investment": you don't get as many years with them as you would from a puppy. But that's not fair; you're never sure how many years you'll get with any animal, as things like cancer, disease, and accidents exist. If you change the dynamic from thinking about what you can receive from an animal to what you can give them, the senior ones come into focus as the ones in real need.

4. Animals Live Longer Than You Think

"Senior" doesn't necessarily mean "about to pass away at any moment." It can, of course, but you'd be surprised at the tenacity of domestic animals, even those who've been through the mill. As a rule, pedigrees and purebreds die earlier, while crossbreeds, mutts and moggies have a more extended lifespan. My husband's mixed-breed tortoiseshell cats lived to 19 and 21; the average lifespan of a domestic cat is 15, but many things can affect that, from lifestyle (indoor vs outdoor) to diet.

With dogs, size is also a consideration, with the larger breeds tending to have shorter lifespans because of strain on the organs. Average lifespans across many dog breeds run firmly into the teens, with poodles expected to live until 14 and border collies until 13. And when it comes to animals like tortoises, you're likely in for several decades, if not longer. So don't think that adopting a senior pet means you'll only have a few brief years together.

The twilight years of a pet's life may include more vet visits, but that doesn't automatically mean you're doomed to dealing with catastrophic illness and spiraling veterinary expenses. An elderly animal is perfectly capable of being a healthy animal for a good portion of its life, and it's now possible to get cheap insurance specifically for animals over seven or eight. (Yes, that's what counts as "senior", which is acceptable for a dog or cat expected to live until 10, but perhaps not quite realistic for the ones who'll comfortably hit the teens.) Be prepared, particularly if you have an animal with a particular special need, but you don't need to be unduly alarmed.

Older animals often do require specialist help; it would be false to pretend that isn't true. And ultimately, an elderly animal in your care is your responsibility, up to and including ensuring the comfort in which it passes away. This can be an extremely difficult burden, and I know that's a hard thing to take on; but that's the responsibility you bear with any life in your hands, including that puppy who one day will be old and grey at the muzzle. The alternative for senior animals left unclaimed is a death in a shelter or sanctuary, where staff do their best but can't offer the focus, care and attention of a loving home. (Some shelters also have high euthanasia rates for older animals.) Loving a senior pet becomes an exercise in selflessness. You'll be surprised what you'll do to help one.

7. You Can Be Part Of A Brilliant Community

People who rehome senior animals tend to find each other. There's a reason the Old Friends Senior Dog Sanctuary is incredibly popular on Facebook (1.5 million followers and counting, plus a serious Presidential campaign for the venerable Mildred the pug), or why the accountant who lives with 9 senior dogs and a pig called Bikini is an Instagram star. And then, of course, there's Corduroy, the world's oldest living cat (Guiness World Record-certified), who at 26 has been officially "senior" for 18 years. People who devote themselves to senior animals can get addicted for life; I'm not sure I'll ever go back to puppies or kittens. Plus, an elderly animal support network can be a lifeline when things go wrong (they're animals, so they will eventually get stuck in something).

If you're in the market for a pet, don't restrict your search to young animals, unless you have good reasons for specializing in them. Consider a senior pet. They may be the grannies of the species, but they've got a lot to give (some of it's slobber, but still).