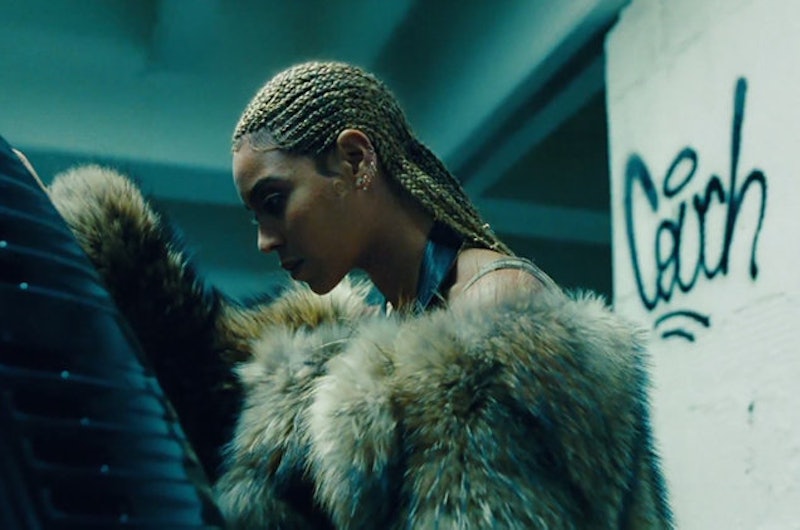 It wouldn't be fair to describe Beyoncé's Lemonade as just another Beyoncé album — because it's not. The visual aspects of Lemonade, the cinematic mastery that runs through it, the tightly-packed, hermetically sealed interludes of spoken-word poetry, all work to create a whole that's larger than the sum of its parts. And this is thanks in part to the collaborative process behind Lemonade. Among the musical visionaries that Beyoncé curated — James Blake, Jack White, Diplo, Ezra Koenig, to name a few — the artist also enlisted the help of several directors and one particular poet. After hearing the impactful storytelling, you might have wondered, did Beyonce write the spoken word poems in Lemonade? Or at least pen some of them? Bey gives credit where credit is due — this time to Warsan Shire, an award-winning Somali-British writer who's lent her distinct and robust voice to Beyoncé's intimate project.

In Lemonade's closing, Shire is credited with "Film Adaptation and Poetry." Beyoncé recited snippets from “For Women Who Are Difficult To Love,” “The unbearable weight of staying (the end of the relationship),” "How To Wear Your Mother's Lipstick," "Grief Has Its Blue Hands In Her Hair," "Dear Moon," and “Nail Technician As Palm Reader,” to form the bookends of each track. Bookends that are titled by 11 Kübler-Ross model of grief inspired stages — intuition, denial, anger, apathy, emptiness, accountability, reformation, forgiveness, resurrection, hope, and redemption.

In 2011, Shire released a poetry pamphlet titled Teaching My Mother How To Give Birth. In 2012, Shire released an album of spoken poems herself, Warsan Versus Melancholy (The Seven Stages of Being Lonely), which feels coincidentally close to the stages Bey outline in Lemonade. Shires stages are labeled as "The Distraction," The Desperation," "The Honest Conversation" and so forth. In 2015, Shire produced Her Blue Body, a chapter book she put out as the young Poet Laureate for London. According to Shire's twitter, her complete collection of poetry will drop in 2016.

But the spoken word that falls outside of Shire's published work, most likely came from Bey and her team — though it was probably still inspired by Shire since again, she's the one credited at the end of Lemonade. The young poet's ability to intertwine love with broader concepts of genealogy, gender, and race bleeds perfectly into the artistic vision behind Lemonade. Like Shire's poetry, Lemonade isn't insular. Beyoncé draws from the breadth of human experience to create a vehemently personal catalogue of what she's overcome. Weaving together Shire's words only heightened the power of Beyoncé's Lemonade, ultimately providing the project with both clarity and tonal complexity.

More like this
Graham Norton’s 10 Best Eurovision Zingers Will Leave You Howling
By El Hunt
Spice Girls’ Net Worth: The Richest Member Is Wealthier Than The Rest Combined
By Hugh McIntyre
Watch The Emotional Trailer For Dolly Alderton’s 'Everything I Know About Love'
By Bustle UK
Everything We Know About 'Love Island' 2022 So Far
By Sam Ramsden
Get Even More From Bustle — Sign Up For The Newsletter