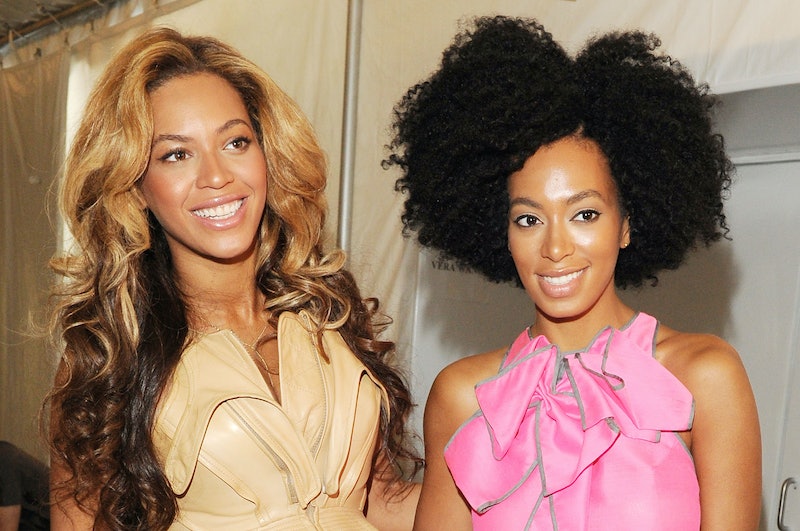 Everywhere you look in Beyoncé's visual album, Lemonade, you spot strong women, holding things down together. Some of these women you'll recognize immediately as the representation of female power in all its forms: Serena Williams, Amandla Stenberg, Zendaya, Quvenzhané Wallis, model Winnie Harlow, the mothers of Trayvon Martin, Michael Brown, and Eric Garner. Ticking off these names, one can't help but notice that Beyoncé's little sister Solange is absent from Lemonade. But just because you don't physically see Solange in the HBO special doesn't mean she didn't leave her mark on Beyoncé's sixth album, which deals with infidelity. Take a closer look at the visuals, peruse the credits, and read those lyrics one more time, and you'll see that Solange's presence is felt throughout Beyoncé's most personal album to date.

Solange's apparent influence begins right where the album begins, with the opening track "Pray You Catch Me," which is a collaboration with the English electronic artist James Blake. An indie act like Blake may seem like a surprising partner for Beyoncé, but he seems right up Solange's alley. The two have shared festival bills, and she's even been a supporter of Blake via her record label, Saint Heron. It's no surprise Solange's musical taste may inspire Beyoncé's, since she has been known to introduce her big sister to new artists. Solange's "influencer" status was solidified back in 2009, when she took Beyoncé and her hubby, Jay Z to a free Grizzly Bear show in Brooklyn, which gave us all the much talked about footage of the couple swaying to the indie rock band's track "Ready, Able."

Many of the indie collaborators on Beyoncé's latest have close ties to Solange. The internet can't stop trying to figure out who "Becky with the good hair" is on Beyoncé's "Sorry," but the producer of that track, MeLo-X, did meet Bey through Solange. He told Noisey in 2014, "I met Beyonce at a New Years eve party at Solange's house two years ago and gained even more respect and admiration for her." The song "Hold Up" was written by Ezra Koenig, whose band, Vampire Weekend, tapped Solange to open shows for them, including one in Brooklyn in 2013.

Josh Tillman, better known as Father John Misty, also gets a credit on that same song. While Beyoncé doesn't wear her musical tastes on her sleeve, sharing them via social media instead, Solange did show her love for Father John Misty days after Coachella's second weekend in 2015, the same time in which Bey let Tillman know he had earned a spot on the album. "Father John Misty Show at Civic had me wondering if I could drop it like that," Solange wrote on Facebook about his California show, "and pick it back up..... as easily as he does."

Explaining how his writing credit came to be, Tillman, who has worked with Lana Del Rey in the past, told Billboard that "about a year and half ago, my friend Emile Haynie [producer on "Hold Up"] played Beyonce some of my music, along with some tunes I've written for other people, back when she was looking for collaborators for the record." He went crazy writing lyrics for the song and would eventually learn in the California desert that the first verse and refrain of "Hold Up" are his lyrics and melody. "I was mostly kind of in the dark, my involvement with the record kind of ends with me just sending off the demo. It wasn't until she came to my Coachella set in 2015 and told me personally it had made the record that I really had anything concrete with which to convince my friends that I hadn't actually gone insane."

It's worth noting that Beyoncé's first public appearance at Coachella was in 2014, when she got onstage to dance during her little sister's set. The two broke out a choreographed number that any sister duo would be jealous of to Solange's "Losing You," a pretty epic finale at one of the smaller stages at the festival. (A festival, oddly enough, that Beyoncé has never actually played herself, only appearing with her husband Jay Z when he headlined in 2010.)

But, Solange's reach on Lemonade goes further than the stellar list of collaborators. New Orleans, where Solange moved in 2013, is an influence throughout the visual album from the shot of Leah Chase, the city's Queen of Creole cuisine, to the antebellum imagery to the opening brass on "Daddy Lessons," a song that mentions Bey's little sister. It's no surprise that the magic of the south would play a role since Solange has been open about her heart belonging to the city. When speaking of the power New Orleans can have, Solange told Vogue earlier this year, "It is also one of those things you can’t put into words, you can’t really put your finger on what is so magical about it."

The New Yorker points out that throughout Lemonade there are throwbacks to the images of Solange's New Orleans wedding with "shots of a group of solemn black women dressed in fanciful white dresses." Beyoncé seems to be taking on the power of her sister. Solange also told Vogue in the same interview that she created her own label out of frustration over the "way that I was seeing young black creatives represented, specifically in R&B music. I think to make change happen, you have to start it yourself, rather than complain about it."

Beyoncé seems to be taking that same position with songs and imagery that focus on togetherness. None more so than in the video for "Formation," about which Solange told Vogue:

I have always had tremendous respect for my sister as an artist, as a woman, and now as a mother. It’s been very interesting to see the impact that video and song have made globally, the connectivity that it had, and the power that it had. Honestly, I was just blown away as everyone else, because solidarity means so much, and there are so many different ways to communicate that. I think actually she has always communicated that.

Beyoncé's focus on solidarity on Lemonade is coupled with anger and sadness over a man who has done her wrong. With those mentions of infidelity comes reminders of that one moment that clouds over Beyoncé's very curated life, and it's a moment that has a direct connection to Solange's. Of course, that connection is that infamous elevator fight after the Met Gala in 2014, in which the younger Knowles punched and kicked at Jay Z while Beyoncé looked on, and did nothing. The moment has always been a mysterious one, despite the fact that Beyoncé played it up as a result of too much power in one small space on the remix to "***Flawless": "Of course sometimes sh*t go down/When it's a billion dollars on an elevator." But, even that mic drop of al line couldn't keep fans from analyzing the rumors that Solange was supposedly defending her sister's honor against a husband who was allegedly getting a bit too close to another woman.

For those who want to view Lemonade as an album about a woman scorned, Solange and her actions inside that elevator may be the driving catalyst. Fans could theorize that Solange doesn't need to be credited on Lemonade, because, without her, this album might never have been made. It seems to me as if Solange gave Beyoncé strength in her own opinions, something the pop star previously sang on "***Flawless": "My sister told me I should speak my mind." Speaking her mind might be exactly what Beyoncé has done on her latest album. It doesn't even matter if the infidelity she's singing about is real; what does matter is that Beyoncé has got everyone wondering in the first place.

Solange's possible influence on her sister is far greater than mentions of New Orleans or the collaborators that inhabit her world. That influence is in the message of every song that tells women that you can be angry, you can be hurt, and you can be healed. And that you will have people who support you, as witnessed in the videos for Lemonade where Beyoncé is surrounded by other women who seemingly understand what she is going through. That kind of support was evident in Solange's response to Lemonade, which wasn't in words, but in emoji: 13 lemons, a bee and fist of solidarity. That, perhaps, tells us all we need to know. Solange is standing with Beyoncé — even if you never actually see her doing so.

More like this
The 2023 Grammy Nominations List Is Full Of Surprises
By Jake Viswanath
Julia Fox Says She Dated Kanye To “Distract Him” So He’d Leave Kim K Alone
By Jake Viswanath
The 'Love, Lizzo' Harry Styles Scene Is Just 1 Moment That Made Fans Feel Seen
By Brad Witter
J. Lo Just Announced A New Album — And Ben Affleck Inspired At Least 1 Song
By Stephanie Topacio Long
Get Even More From Bustle — Sign Up For The Newsletter