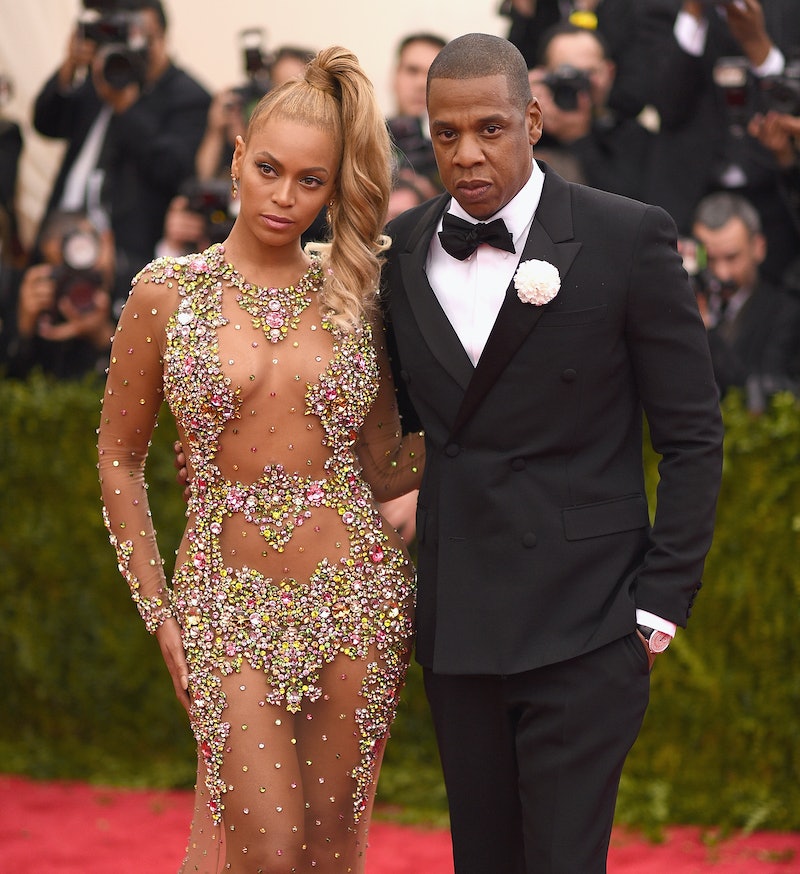 A lot of people were talking about Beyoncé's Lemonade special on HBO Saturday night, and one theme came up again and again — people were speculating that the songs were aimed at Jay Z and that it explained the infamous elevator fight between Solange Knowles and Jay Z back in May 2014. In fact, some of Beyoncé's Lemonade lyrics could be about the elevator incident if you look closely. Although the event took place two years ago, it remains one of pop culture's biggest mysteries.

During the night of the Met Gala in May 2014, Beyoncé, Jay Z, and Solange were captured on elevator surveillance footage leaving the Met Gala after-party. Once in the elevator, Solange lunged at Jay Z, hitting, punching, and kicking every part of him she could reach. Beyoncé stayed still throughout the incident while other members of their elevator party (presumably bodyguards) pulled Solange off Jay Z. An explanation for the incident was never given, and the joint statement released by the stars offered little insight.

But now, two years later, Beyoncé may have finally given the public what they wanted. I mean, if you look realllllly closely at her Lemonade lyrics until they basically make no sense, two of them stand out as possibly being about the elevator incident. The first one comes from her song "Hold Up."

Something don't feel rightCause it ain't rightEspecially comin' up after midnight

Now, the first two lines could be Beyoncé talking about how something didn't feel right and wasn't right between Jay Z and her sister, but it's the last line that really makes it seem like it's about the elevator. If you watch the video footage from that night, the group gets onto the elevator on the 18th floor, the fight breaks out, and, then it seems some buttons were pushed on the elevator either in an attempt to either stop the elevator or get out faster. In any case, it stops going down on the 12th floor when the arrow switches to "up" and it stays on the 12th floor for a little while before making its way back up to 18. What's another word for 12? Midnight. So, perhaps what Beyoncé was saying is that something wasn't right as they were "comin' up after midnight" aka things went down while the elevator climbed from the 12th floor.

Now, does that tell us what happened in the elevator? No. But it could be a hint that the song, in general, is about it. And, that song seems to be about a man cheating on his wife with lyrics like "I smell your secret," "How did it come down to this/Going through your call list," and "I don't wanna lose my pride, but I'ma fuck me up a b*tch." Obviously it can't be known whether the song is autobiographical, but it's definitely some food for thought. Bustle reached out to Beyoncé and Jay Z's reps about the allegations of infidelity and did not receive a reply.

However, that's not the only Lemonade tune that could be about the elevator incident. "Forward," performed by James Blake, but produced in conjunction with Beyoncé features these telling lyrics.

This one is a little more straight-forward. Perhaps it was time for Jay Z to listen, and Solange did so by fighting him and telling him what she thought of him. The "hold doors" lyric could be a reference to stopping the elevator on the 12th floor while everyone got a handle on what was happening inside the elevator. And, being in those close quarters with each other certainly provided a chance for Solange to be "open for a while" about what was on her mind. There wasn't audio on the elevator footage, so we'll never know what she or Jay Z had to say.

But, whatever it was, or whatever really went down, these lyrics sure make it seem like Beyoncé hasn't forgotten that fight either — even two years later.

More like this
Beyoncé’s Special Tribute To Sister Solange Was Both Touching & Hilarious
By Stephanie Topacio Long
Kanye West Apologizes To Kim K "For Any Stress I Have Caused" In Rare Interview
By Jake Viswanath
Adam Levine Denies Having An Affair — But Admits He “Crossed The Line”
By Jake Viswanath and Radhika Menon
Everything To Know About Taylor Swift’s 10th Studio Album, 'Midnights'
By Grace Wehniainen and Jake Viswanath
Get Even More From Bustle — Sign Up For The Newsletter