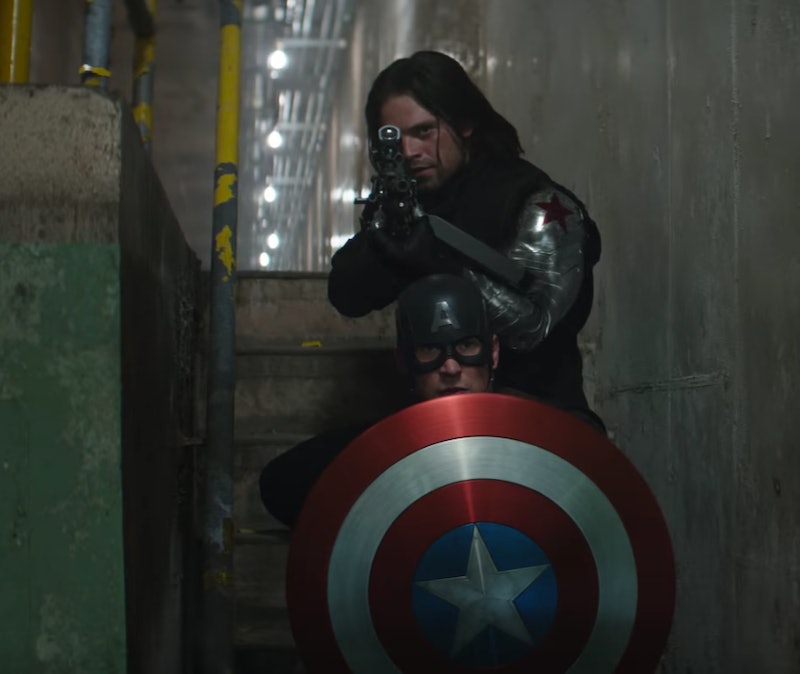 Let's face it Marvel fans: if there's one thing Marvel movies are really lacking in, it's a really passionate canon ship. Sure, there's Tony Stark and Pepper Potts, and Thor and Jane Foster, but all of those couples have yet to establish the kind of following of, say, a Lois and Clark. There is, however, one MCU relationship that comes close: the friendship between Captain America's Steve Rogers and Bucky Barnes (aka Captain America and The Winter Soldier). The dynamic duo, known to fans and shippers as Stucky, is back for their third outing on the big screen in Captain America: Civil War , and their friendship is said to take center stage this time around. In anticipation of their great romance (hey, a girl can dream), here are 13 Stucky GIFs and memes you need in your life.

Steve and Bucky might only be friends in the movies, and though their love might not be romantic in kind, it's pretty damn strong. "These are two guys who grew up together, and so they have that same emotional connection to each other as brothers would, and even more so because Bucky was all Steve had growing up," Civil War co-director Joe Russo told Empire . Need proof of their (insanely cute) brotherly bond?

Even after Steve Rogers became Captain America, to Bucky he was always that wimpy kid from Brooklyn. (Also, check out the fading effect on this GIF... *swoon*)

The brotherly salute is so sweet, and OMG I'm sobbing.

To be fair to Bucky, there is something strange about Cap asking The Winter Soldier if he wants to build a snowman...considering he "died" falling into a snow-covered mountain and was then frozen for decades.

Once again, Evans knows what's up.

Um, BRB, feeling all the feels.

The sexual tension is strong — goofy, but strong.

Evans and Sebastian Stan totally love each other IRL.

Here's Evans drinking a hot beverage out of the world's smallest tea cup. You're welcome.

Stucky, may your romance — I mean, er, brotherhood — last forever.