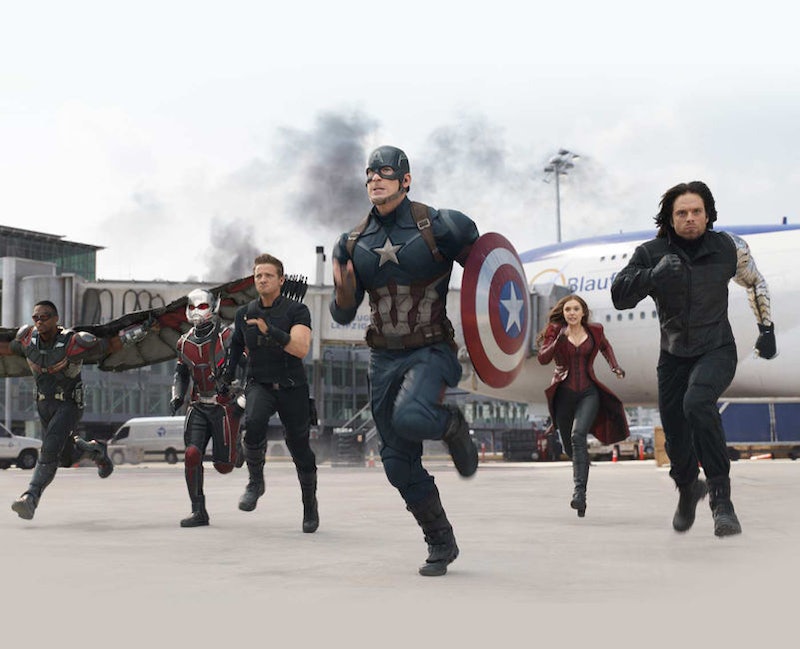 The clip features an epic fight sequence, with Team Cap — Captain America, the Falcon, the Scarlet Witch — infiltrating a building. Curiously, the Winter Soldier (aka Bucky) was nowhere to be seen. Bucky, of course, is the main reason Iron Man and Captain America are fighting. After the government proposes registering all superhero vigilantes, Iron Man and Cap find themselves on opposite sides. Does his absence from the clip mean that Team Cap is trying to rescue him from government forces? You can watch the new footage below.

The rest of the new trailer included brief scenes we've seen before in trailers and a brand new look at Black Panther facing off against the Cap himself. Unfortunately, the new clip doesn't really shed any new light onto all the many reasons for why Iron Man and Captain America are fighting.

However, Evans wasn't just at the MTV Movie Awards, which were pre-taped on Saturday night, to premiere the trailer — he was also a nominee. Evans was the only Avenger (sort of) nominated for this year's Best Hero for playing Captain America in Avengers: Age of Ultron (Paul Rudd was also nominated for Marvel's Ant-Man). Age of Ultron was nominated for six golden popcorns, including Movie of the Year and Best Ensemble Cast. Unfortunately, they failed to take home any awards, but, hey, there's always next year. And, if the Civil War clip is anything to go by, I'd say they have a shot to win a few.