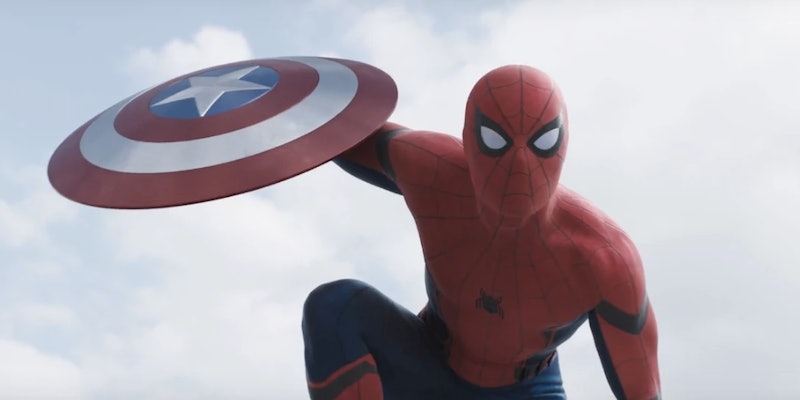 Spider-Man fans have had their hearts tangled in a web of constant emotions over the years. Between the early-'00s Spider-Man films brought to us by director Sam Raimi, the later released Amazing Spider-Man films, and the upcoming third Spider-Man live action film reboot in the form of Marvel's 2017 theatrical release of Spider-Man: Homecoming, there are now three actors who have played the web-crawler. However, based on trailers alone, I may have to give Tom Holland the crown, because the new Captain America: Civil War promo features Spider-Man more so than any that have come before it. And the new Spider-Man is amazing.

If your heart is already attached to the portrayals of Peter Parker previously performed by either Toby Maguire or Andrew Garfield, then you may be just a tad bit skeptical when it comes to the portrayal set to take place with younger 19 year old actor Holland in his Captain America: Civil War debut. However, the latest Civil War promo is giving me hope for the new Spider-Man, because there's no denying that this is the Spider-Man we have previously read about in the comics.

While the official introduction of Spider-Man in the Avengers universe revealed nothing more than a simple "Hey everyone" — along with the swift stealing of Captain America's shield — it was still exciting. But the new promo features a more complex line from the beloved comic book character, and fans can get a greater sense of Peter Parker's snarky attitude when he's wearing the red and blue suit. Basically, Holland is shaping up to be just the humorous and fun-loving character Amazing Spider-Man comic book readers are familiar with. Just watch the new promo below to get all sorts of pumped up.

Not only is Spider-Man strong enough to hold back a punch from Captain America's long-time pal, Bucky Barnes (now known as the Winter Soldier), but he also quickly tries to distract him during their battle by saying, "You have a metal arm? That is awesome!" And, honestly, this line makes me more satisfied with this idea of a younger version of the character than I originally thought I would be. Not only does Parker sound totally intrigued and excited about this whole superhero thing — as I'm assuming any adolescent boy who first discovers his own superpowers would be — but he is also is a much-needed comic relief through a set of eyes other than Robert Downey Jr.'s Iron Man. In fact, with their characters both having such a comedic and egotistical air about them, it's no wonder why Spider-Man would immediately choose to fight on his side of the Civil War.

I've got my bets on Spider-Man's adventure — both in Captain America: Civil War and in Spider-Man: Homecoming — being a journey of hardships and self-realization. Right now it makes sense that Spider-Man is the eager newbie in the group. But, eventually, the truth behind the famous saying, "With great power comes great responsibility," is going to hit him hard. And, in this very moment, Holland's character is perfectly set up to go through that shocking character development realization for himself. Basically, Peter Parker's story is going to be the perfect emotional growing up rollercoaster that we have never seen portrayed on the big-screen before. This is not going to be another origin story.

And the wait is almost over... Kind of. Captain America: Civil War hits theaters Friday, May 6, and Spider-Man: Homecoming will be swinging into theaters July 7, 2017.