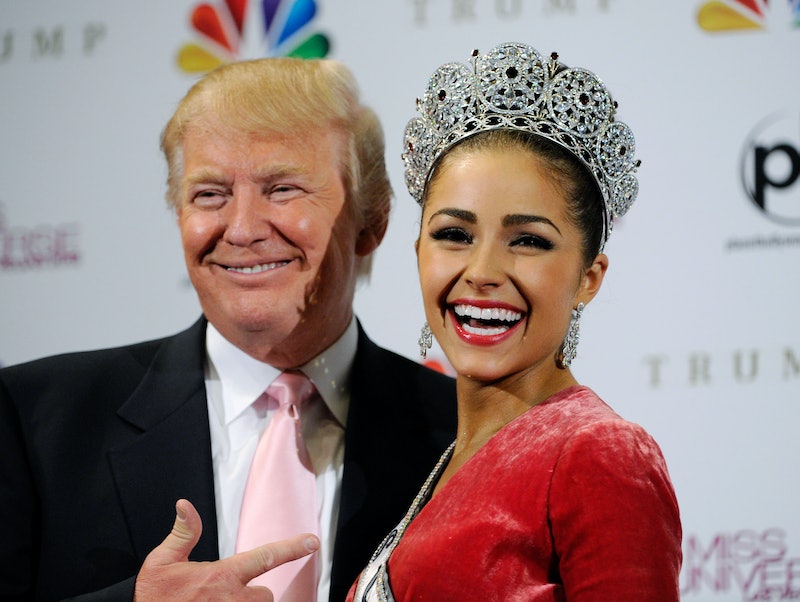 Water is wet, the sky is blue, and Donald Trump's campaign reeks of sexism in a way I once thought was impossible for a modern presidential election. Trump has made so many sexist, misogynistic jabs that although it's still repulsive, it's almost to be expected. However, some of Trump's supporters have, apparently, upped the ante. On Monday, Fortune posted an article about misogynistic merchandise being sold at Trump rallies. The items have the expression "Trump That Bitch"— which, based on the former Secretary of State's face being featured on some of the items, "bitch" is a reference to Hillary Clinton. Welcome to 2016.

The classy rhetoric was captured by Caroline Modarressy-Tehrani, a host at HuffPost live, who tweeted a photo of the merch. Others have found appearances of the T-shirt at past Trump rallies, including of supporters wearing a variation that says on the back, "Hillary sucks but not like Monica." Their mothers must be so proud.

It's hardly a surprise that a segment of Trump supporters exhibit blatant and repugnant hostility towards women — and, might I add, women in power — considering that, you know, they're supporting Trump. (If you need a reminder of his record of misogyny see here or here.) But, the disturbing quality of "Trump that bitch" merchandise, which includes t-shirts, bumper stickers, and hot sauce, according to the Fortune article — is compounded by the fact that Trump hasn't denounced these supporters' actions.

The merchandise has been around for months, but Trump's campaign has allowed it to continue being sold at his events — and from my perspective, tolerating sexism is just as bad as outright sexism.

Not only has Trump tolerated these slogans, but he's shown that he even finds them funny. At a rally in February, when an attendee held up a bumper sticker that said "Trump that bitch," Trump grinned and said fondly, "This can only happen at a Trump rally." Then, he pretended to scold the attendee: “Sir, you’re reprimanded, okay? But we’re not throwing him out, right folks?” Cue cheers.

However, it's important (and disheartening) to note that Trump's supporters aren't the only ones to attack Clinton via merchandise. A few months ago, a supporter of Bernie Sanders registered a debate viewing party called "Bern the Witch" on Sanders' campaign site, where anyone can post events. A website named The Thrill Society embraced the expression and began selling t-shirts emblazoned with it, complete with an oh-so tasteful Photoshop attempt.

But the event on Sanders' campaign site was quickly taken down, which showed how much more attune and responsive Sanders and his campaign is to sexism than Trump & Co. (not that that's a shocker). Also, earlier this month, when Paul Song, a Sanders supporter, used the phrase "corporate Democratic whores" at a rally in New York City, the Vermont senator swiftly condemned it in a tweet.

In contrast, when faced with disgusting behavior of his supporters, Trump seems to only parry with lukewarm jokes. I take comfort knowing that if Trump gets the Republican nomination, when women go to the polls in November, there's a good chance that the joke will be on him.