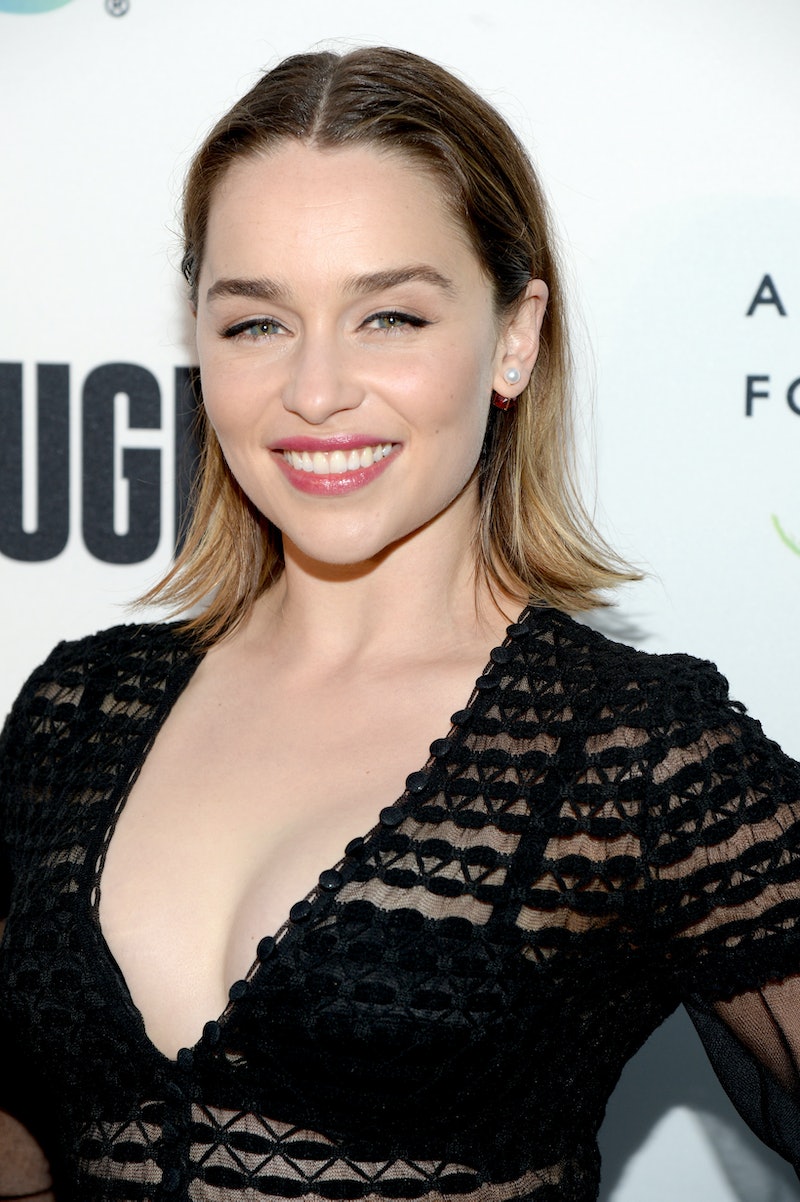 It goes without saying that at age 29 Emilia Clarke has accomplished quite a bit, thanks to a very successful acting career that's only continuing to flourish with each new project she takes on. Clarke is perhaps best known for her role as Daenerys in the HBO series Game of Thrones, but she's also quite an accomplished film and theater actor and one of the most sought-out young actors in Hollywood today. So, what advice would Emilia Clarke give to herself at the ripe old age of 18? Here's a hint: It involves sunscreen and following your dreams.

Teen Vogue asked the actor to read aloud a letter to her 18-year-old self, and it was rife with incredible advice for anyone, not just teenagers. She's now nearly 30, but recalls being 18 with big dreams and goals for the future. In the video, Clarke offers herself advice, saying,

Clarke encourages herself to disregard those who will say "that's not possible, because it is" in regards to following her dreams, telling herself that even though she "didn't get into drama school this time around," that she will, adding, "you have the strength to overcome it." Of course, this certainly applies to anyone trying to follow their dreams, not just those pursuing an acting career. It's certainly hard not to hear criticism from others, but Clarke's is a great message for anyone to hear at any point in their lives.

She adds that it's totally fine to go to parties and have fun at parties, but quips, "you don't need to do what everyone else is doing... ain't nothing wrong with a Diet Coke."

Clarke then quotes "The Sunscreen Song" by Baz Luhrmann, saying "you are not as fat as you think you are." She continues, "There are some women who look some way, and there are other women who look another way ... And the way that the other women look, people love, because they look like women."

It's an important message about body image, of course for teenagers who are subject to intense body insecurity, but to all women, who may be struggling with insecurities about the way they look.

Lastly, Clarke discusses what it's like to endure heartbreak, saying that it hurts so much "because it's gonna make you doubt yourself," and will "make you feel like you're not worth it... but you are, and there's lots of people who are gonna tell you that you are worth it. The people in your life, when all the lights are off, the real people who you really love, just hug them, like every day."

Clarke ends her note by saying, "wear sunscreen," which pretty much sums up all the practical yet heartfelt advice that she would give to herself at 18. It's sound advice that women of all ages can heed. And I think I need a tissue now...

More like this
Gwendoline Christie’s Partner Is Part Of Royal Family History
By Parry Ernsberger and Sophie McEvoy
Beyoncé & Madonna’s “Break My Soul” Remix Honors A Group Of Black Icons
By Stephanie Topacio Long
It’s Official: 'The Bachelorette' Is No Longer A Fairy Tale
By Samantha Allen
Most Comfortable Underwear For Big Butts
By Audrey Williams
Get Even More From Bustle — Sign Up For The Newsletter