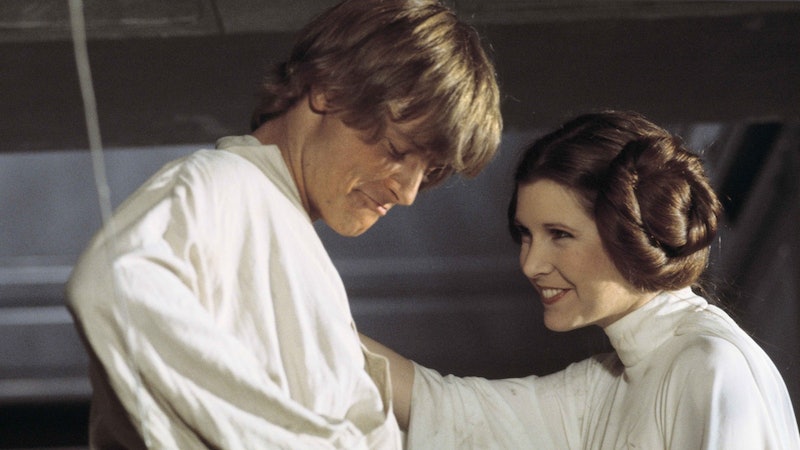 George Lucas' Star Wars may have provided one of the most iconic cinematic relationships of all time in Han Solo and Princess Leia (now General Leia), but the saga is far from a romantic one. Han and Leia aside, the series saw little to no successful romances, with love stories ending up in incest, heartbreak, and, in most cases, the creation of evil (I'm looking at you, Kylo Ren). It's not that Star Wars hasn't shown some good relationships — the timeless friendship between Chewbacca and Han Solo comes to mind — but the series is much more populated with toxic relationships than good ones. Anakin and Padme, Luke and Leia? They're just some of the many toxic Star Wars couples.

Toxic relationships are, to put it crudely, relationships that hurt you more than they help you. They are manipulative, destructive and, overall, extremely unhealthy. Some signs of a toxic relationship include avoiding confrontation, making lifestyle changes to suit the moods of a partner (or friend), self-hatred and even depression. A relationship doesn't have to be physically abusive to be toxic, but power dynamics don't always have anything to do with brute force. This is clear given these nine toxic relationships featured in Star Wars.

On a toxicity scale of butterflies to scorpions, Luke and Leia are definitely closer to the butterflies, but their relationship is still a bit toxic when you consider the, uh, incest factor.

Kylo Ren and General Hux have a very intriguing love/hate relationship that has disaster written all over it. I'm not sure who is the more destructive influence in this duo, but there's no way their relationship is healthy in any way.

Another evil duo, Darth Vader and Boba Fett were actually not so toxic. I mean, for the most part they fought side by side in their pursuit of the Dark Side. Still, the whole Dark Side, Empire thing kind of makes their relationship toxic by definition.

R2-D2 and C-3PO love each other, but their constant bickering is a classic sign of a toxic relationship. I know, it hurts to admit that a relationship so beloved could be so toxic. And yet, 'tis the truth.

Real talk, guys: Han and Leia's relationship is incredibly toxic. He spent the entire first part of their relationship constantly belittling her and dismissing her contributions because she's a woman and a government leader. And then there's also the fact that he refuses to tell her that he loves her. It's time to kick him to the left, if you catch my drift.

Supreme Chancellor Palpatine is manipulative and exploits Anakin's weaknesses for his own gains. Palpatine is peak puppet master, and that's not good.

Finally, the most toxic couple of all Star Wars couples, Padme and Anakin. Their relationship was so toxic that when Anakin turned evil, it killed Padme. Putting the ridiculousness (and sexist) aspect of that particular plot point aside, Anakin grew increasingly controlling over the course of their courtship, and his volatile nature ended up costing Padme her life.

Fans and Star Wars, through no fault of their own, can sometimes wander into toxic territories. You might wake up one day and realize, for example, that you've spent more money on Star Wars action figures than rent. Or that you aren't opening yourself up to romance because you're too in love with the cardboard cutout of Han Solo you keep in your closet. Whatever it is, Star Wars fans, just make sure your love of the franchise is always positive, fun, creative and, most importantly, healthy.

May the force be with you all.