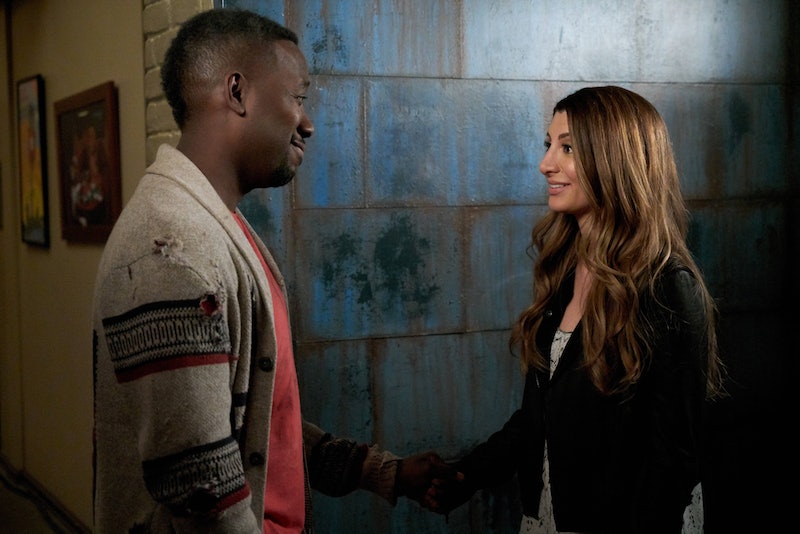 For someone who's never been all that lucky in love, the fact that Winston and Aly kissed on New Girl certainly bodes well for our favorite cat-loving loftmate. And while that in itself is certainly cause for celebrating (considering he's been pining over her for months and months), that doesn't necessarily mean that Winston and Aly will start dating right away. After all, they do have some major hurdles to overcome first — like the fact that she's still technically dating Trip and he's still technically married to another woman. (You know, small stuff like that.) So even though I'm beyond thrilled that Jess' drug-induced miscommunication led to this surprise lip-lock, these two still have a long way to go before any romantic relationship can be established.

Aly didn't even seem to realize that she had these type of feelings for Winston until after he congratulated her on her five-year anniversary of being a cop — something that Trip had completely failed to do. Then it was almost like she started seeing Winton in a completely different light. Armed with the knowledge that he already had romantic feelings for her, she decided to kiss him right then and there. But will this inspire her to officially call things off with Trip? These two definitely have great chemistry together, but the episode left their next move kind of unclear.

For all we know, Aly might not feel comfortable dating a married man, regardless of whether or not it was all supposed to be just a prank. He is legitimately a married man, so that definitely may throw a wrench in this budding romance. Then, of course, there's the fact that they both work together and are partners. Aly may not want to mix business with pleasure.

But try as she might to make excuses for why they shouldn't be together, it's clear at this point that the feelings Winston has for her is mutual. So while they may not get together right away, at least we know that emotionally they're on the same page and Winston is one step closer to getting that happily ever after he so deserves.