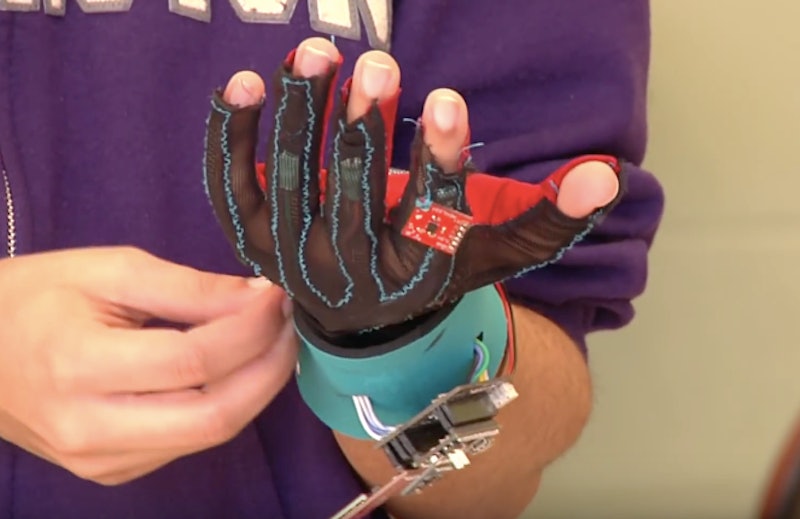 While most college undergraduates are spending their free periods on Facebook, two remarkable students have used their spare time to pioneer an invention that may change the very way we communicate. Navid Azodi and Thomas Pryor, sophomores at University of Washington (UW), have created lightweight gloves that can translate sign language instantly. Think of it as a Google Translate for your hands.

The SignAloud glove prototype recognizes hand gesture and placements matching them to the correct American Sign Language word or phrase. Sensors throughout the glove pick up the placement and motion data of the hands which is sent to a computer via Bluetooth. The computer analyzes the data, searching for a correlation in its database, and if it recognizes a gesture, then the ASL translation is played through a speaker. The students created the gloves using communal equiptment and resources in UW CoMotion MakerSpace, and have since won the Lemelson-MIT Undergraduate Student Prize and a smooth $10,000.

“Our purpose for developing these gloves was to provide an easy-to-use bridge between native speakers of American Sign Language and the rest of the world,” co-creator Navid Azodi said in a statement released by UW. The students hope that by creating this product they can better serve the community of 70 million deaf people worldwide, facilitating interactions between those who are deaf and hearing.

You can see the gloves in action here:

Currently, there are other competing student-created translation products, but co-creator Thomas Pryor believes they are not versatile enough for frequent use. He states that their gloves are an overall improvement, “Many of the sign language translation devices already out there are not practical for everyday use. Some use video input, while others have sensors that cover the user’s entire arm or body.” Prior believes it is the design of the SignAloud gloves that will allow them to one day be as ubiquitous as hearing aids or contacts, “Our gloves are lightweight, compact, and worn on the hands, but ergonomic enough to use as an everyday accessory.”

The two met as freshman and found they had a lot more in common than just living in the dorms. “The idea initially came out of our shared interest in invention and problem solving. But coupling it with our belief that communication is a fundamental human right, we set out to make it more accessible to a larger audience,” Azodi said. Both have a passion for invention and giving back, which lead them to focus on a product that could improve the lives of people belonging to a notoriously under serviced community.

The gloves may also have additional applications, Pryor and Azodi believe. They suggest the gloves could be used in hospitals to monitor the movements of patients recovering from a stroke, and they may be utilized in the gaming community, improving movement and control within virtual reality field. However, for now, they are happy focussing on improving them as a tool for communication, and getting them onto the hands of those who need them most.

More like this
How To See The Lunar Eclipse On May 15-16, 2022
By Kaitlyn Wylde
What Is “Night Luxe?” Breaking Down TikTok’s New Aesthetic
By Courtney Young
TikTok Is Using A ‘Love Island’ Sound To Expose Their Weird Crushes
By Courtney Young
The Viral TikTok “30,000” Sound Fits Nearly Every Scenario
By Courtney Young
Get Even More From Bustle — Sign Up For The Newsletter