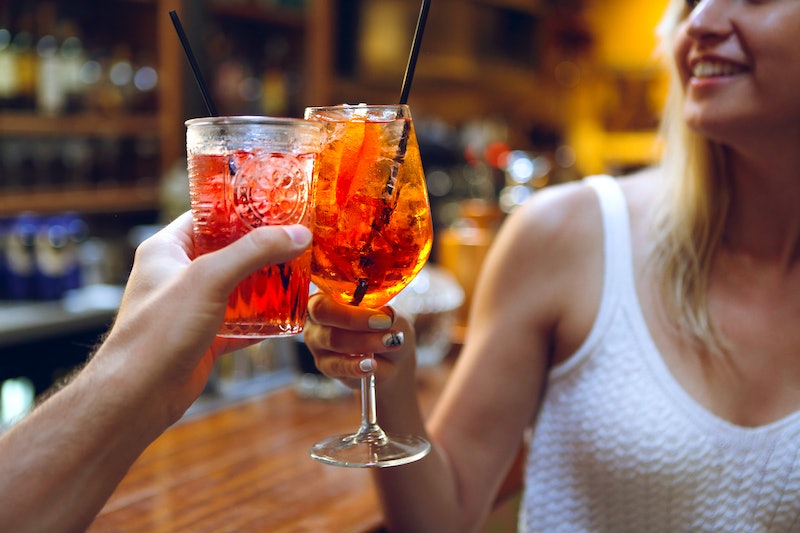 You ever have one of those magical unicorn first dates? That's what I call them anyway — the ones where the person sitting across from you at a dimly-lit bar is so fascinating, so exactly what you're looking for, so attractive that you frankly, can't believe they exist. If you've ever dated for any period of time (or OK, had your heart broken more than you'd care to admit) — then you know that there is always going to be one person who seems too good to be true... and was.

For me, the guy was one blissful Tinder date that lasted until 4 a.m., taking me all across New York — from a lounge to a restaurant to dancing, to a long walk home in the dark, where we danced and kissed and my heart felt like it was on fire. He was successful. He loved animals. He was tall. He was so freakin' sexy it took every ounce of strength in me not to sleep with him. I just knew we would become something, until he completely disappeared, without a trace, never to be heard from again.

I'll never know what became of that guy who was too good to be a real person, but he does check my Snapchat story from time-to-time, so at least we know he's alive. Just like there's sadly no miracle cure that'll help you forget all of those terrible dates you went on, there's also no solution to forget about that one person who fooled you worse than the others. Whether he ghosted you or she turned out to be far from who you thought she was in the beginning, find some comfort in these stories that remind you that you're definitely not alone. But first, check out the latest episode of Bustle's Sex and Relationships podcast, I Want It That Way:

I met this guy on a street corner who had a lovely British accent but turned out he was actually Israeli. We exchanged numbers — and figured out his last name was the same as mine. Just that alone felt too good to be true; no drama with me changing my name if we got married! He didn't come out with us that night but we continued texting and talking until a date, which happened to be the same night as the Boston Marathon bombing.

Note that I had no idea how old he was at the time, I was 25. I look young, so I'm not sure how old he thought I was...but I found out that night that he was 13 years older than me and had previously been engaged. Well, we talked a lot about terrorism and faith and it brought us together to discuss the tragedy. I was really attracted to how easy it was to talk to him about something I had a lot of complicated feelings about.

We kept seeing each other for a few weeks but something kept inching its way toward being 'off.' He always, always talked about work and clients and the final straw for me was when we were out at dinner together and he just won an award for Super Lawyers so I asked him what his colleagues called him at work and he kind of played a guessing game with me (his name was Jonathan so he had a few options).

Finally I said, 'do they call you Mr. Our Same Last Name?' And he goes 'That's right.' and winked. And I said, 'oh that's weird, that's my dad!' And I laughed and he got all serious and was, like, 'I know.' And it just felt really creepy and Freudian and like he liked me because I was young and I don't know, you can put two and two together. It was just overall strange!

A friend from work set me up with her best friend's friend who was visiting from out of town. We all live in Boston and this guy lived in Chicago, and I didn't think the distance would be a big deal. After we stayed out until all hours of the night, talking and eventually, having some of the best sex of my life, I realized that we could have a deep connection. We saw each other like four more times over that weekend and exchanged numbers, promising to keep in touch and see where it goes. Fast forward to three months later, and everything seems to be going well: we haven't made it official but we text and talk all the time. We have phone sex sometimes. He came back to Boston to visit me.

Until I bring up going to Chicago to visit him!

And randomly, he happens to mention that a month before he met me, he had met someone else in Chicago. And he had been dating us at the same time. Well, even though that's a d*ck move, it might not have been so bad if his next sentence wasn't, '...And she's moving in with me next week.'

I dated a guy the last six months of my senior year of college and it was my only relationship throughout my four years. I was really focused on becoming a lawyer, so I didn't really have time to date but a sorority sister hooked me up with this guy and we just clicked. The chemistry was so good: we talked and talked, our makeouts were really hot and we talked about the future all the time. I had just gotten into law school in New York and his job could transfer him there, so we even discussed moving in together.

But when the time came for us to have sex, something was off. He couldn't stay hard. And when he did, he would awkwardly be on top of me in missionary with no real connection. Then I wasn't allowed to sleep naked because he didn't want 'vagina' on his sheets. And then he didn't 'believe' in giving or receiving oral sex.

When I was 22, I got engaged in five months to this wonderful man. He was 15 years older than me, but it all felt like such a whirlwind. He would tell me about his travels around the world, and we even went away to Mexico together for a long weekend early into our relationship. After we dated for six months, we moved in together. And then six months later, he proposed. All this time, I was truly just smitten, thinking I had won the jackpot and didn't have to worry about dating in my 20s like my sister had.

And then, while laying on the couch in our apartment, there was a knock on the door. I thought maybe it was takeout, or something. So I opened it and there was this woman and a baby. Apparently, the last girl he had dated got pregnant and he left her. She explained the whole story to me and let me tell you, it was definitely two against one when he got home.