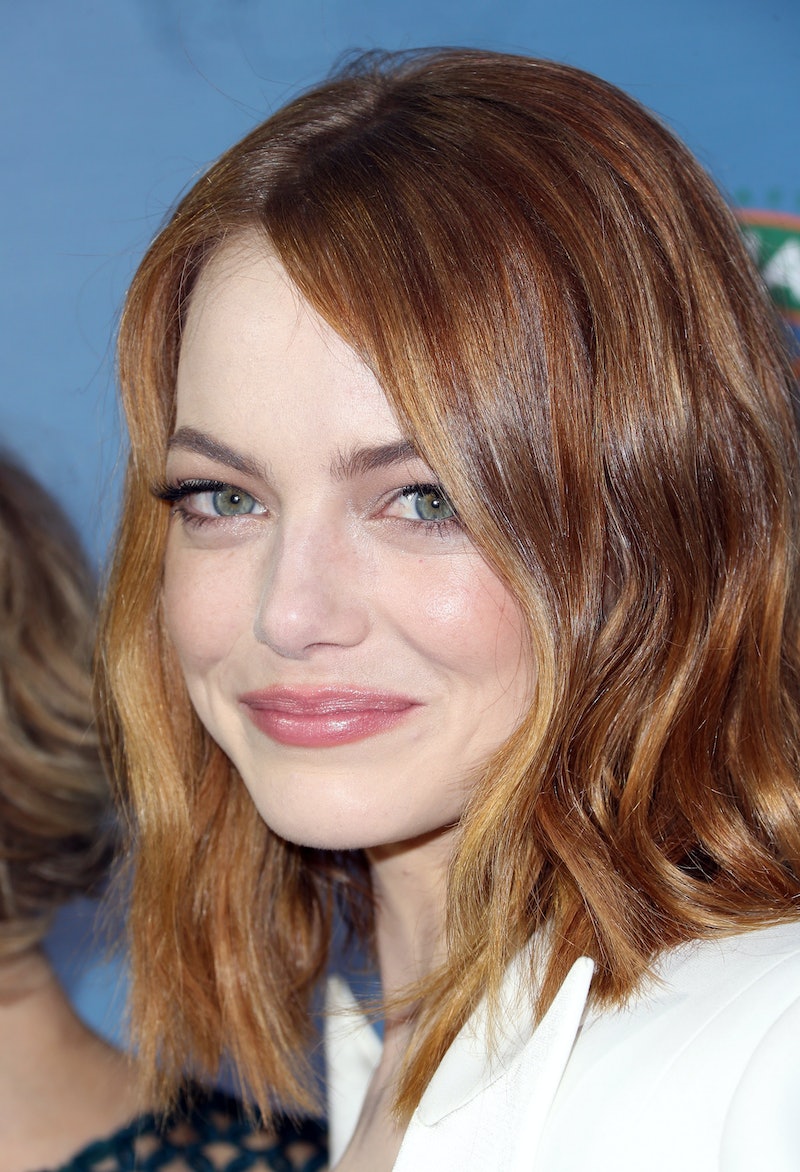 Strawberry blonde, deep russet copper, Emma Stone has been nearly every shade of red in the book but not anymore. The actress dyed her commonly red locks a deep brunette, and it's obviously looks great, especially with an added fringe. But why did Emma Stone dye her hair dark brown? While there's no way, short of speaking to Stone, to know for sure why the star switched up her look, there are a couple of clues that hint at why she may have made the change. Whatever the reason, though, it's clear that while Stone looks great as a red head, she looks just as stunning with darker locks.

The actress has previously shown a proclivity to go lighter wearing her hair in a gorgeous blonde hue in the past. She's also traveled the spectrum of hair color a bit, looking beautiful with deep, copper strands and darker auburn colors. Now, however, she's massively switched up the hair game. Stone has been rocking a perfect long bob with side swept bangs for some time now, so the addition of blunt, forehead-covering fringe isn't a huge departure. The color, however, is fairly shocking. Everyone has come to expect a red tone for the star, and even when she debuts a new cut, the color is fairly consistent. At least, it was until now.

The question still remains, though. Why did Emma Stone dye her hair dark brown? Based on Stone's previous style, the change in color isn't insanely unexpected. After all, she has lightened up her locks in the past, most notably during her time playing Gwen Stacy in the Spiderman franchise.

It's Stone's turn as a blond during Spiderman that gives some clues for her change now. Stone seems more than willing to change up her look for movie roles, and that's where my theory for why she dyed her hair dark brown comes from.

Stone is currently filming Battle Of The Sexes in which she stars as legendary tennis-pro Billie Jean King, a brunette. There has already been incredible buzz around the film, and a teaser image of Stone was released with brunette locks.

Stone's new dark, brown hair, though, seems markedly darker than the look from Battle of the Sexes, leading me to think that the hair isn't for that film at all. Instead, my bet is on Stone's upcoming role as Cruella de Vil in Disney's latest live action film. The film will showcase how the villain we were all terrified of as children became the puppy-obssessed woman we all know and quiver in fear at.

While there's every possibility that Stone could just be feeling like a change, the clues seem to be pointing toward a movie role. Whatever the reasons, her red hair may be her signature, but Emma Stone's dark brown locks are definitely a cool switch for the star.