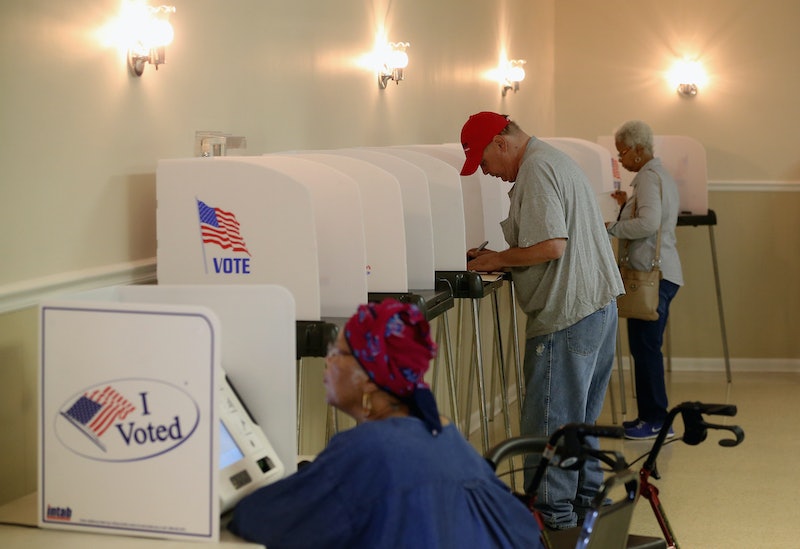 Maryland, along with four other states, held its primary elections on April 26. The state offered the largest pledged delegate prize of the day for Republicans (38 delegates) and the second-largest for Democrats (95). Along with the obvious question of how candidates performed in Maryland, another question of interest is how many of the state's eligible voters actually cast ballots on Tuesday. Expectations were high for big numbers in 2016. How many people voted in Maryland? The estimates as of Wednesday with 99 percent reporting, the AP said 846,899 votes were cast in the Democratic primary, and 435,600 in the Republican primary.

According to the Baltimore Sun, state officials described the primary as having "light to moderate" voting. A record number of people participated in early voting in the state, according to the Washington Post. About 7.5 percent of eligible voters cast their ballots early, three times the number as those who did so in the 2012 primary. Of course, that was a year when the Democratic nominee (President Barack Obama) was running unopposed, so turnout would be expected to be lower. But the Washington Post noted high turnout was expected on Tuesday, partially because the state is also holding contests for an open Senate seat, and there's a hot race for mayor of Baltimore, as well.

The United States Elections Project reported that about 31.5 percent of eligible voters turned out for the 2008 primaries in Maryland, the last primary election that featured more than one nominee for both the Republican and the Democratic ticket. Broken down by party, 878,174 turned out to vote in the Democratic primary, and 320,989 for the Republican primary. Compared to those figures, 2016's turnout was notably better for Republicans, though that could also partially be a reflection of voters switching party registration.

Maryland is one of several states that holds closed primaries, meaning voters must be registered as affiliated with a party in order to vote in its primary. After New York's closed primary on April 19, when approximately 27 percent of eligible voters couldn't participate because they hadn't made the state's October deadline to change their affiliations, the fairness of closed primaries has been the subject of debate. The most vocal in that debate in favor of open primaries have been Sen. Bernie Sanders, who typically appeals to Independent left-leaning voters, and his supporters.

Would turnout in Maryland have been impacted if the state's primaries were open? Probably. According to My Time to Vote, about 19 percent of Maryland voters aren't registered with either major party. In fact, there are close to as many voters not registered as Democrat or Republican as there are voters registered as Republican in the state: 720,276 to 954,940.