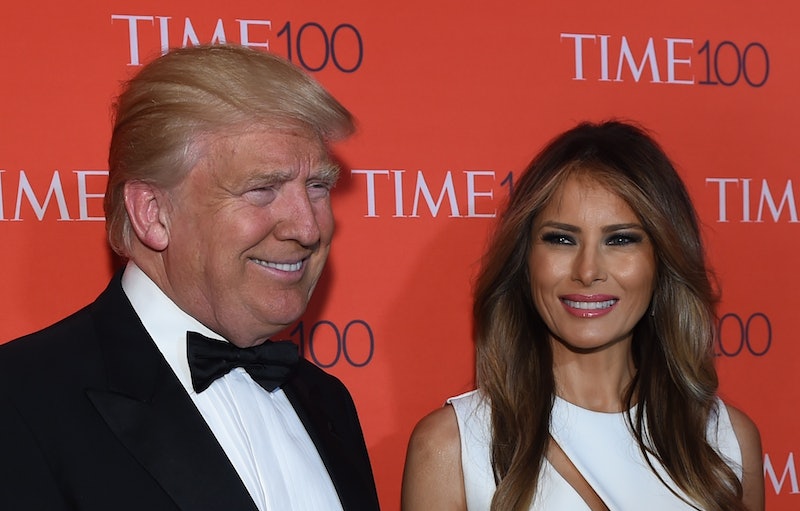 When you're running for president of the United States, most of your evenings are probably pretty hectic — but Tuesday was particularly busy for Republican frontrunner Donald Trump. He won solid victories in all five of the northeastern states to vote on Tuesday, solidifying his lead over challengers Ted Cruz and John Kasich. Before claiming those victories, though, Trump attended the TIME 100 gala in New York City, proving that he might be more appropriate for the red carpet than the White House.

Trump was recently named one of TIME's most influential people of the year, along with such figures as the Pope and Aziz Ansari. Trump wasn't the only presidential candidate named to the list: His company included Hillary Clinton, Bernie Sanders, and Cruz. (None for you, Kasich.) The difference is that Trump was the only candidate to attend TIME's celebratory event on Tuesday night, the same night as some pretty important primaries.

The gala took place in NYC, where Trump spoke later that night at his campaign headquarters to celebrate his victories at the polls. Meanwhile, Clinton was in Philadelphia, speaking to the Pennsylvania crowd that voted for her, while Sanders was in West Virginia, looking forward to the upcoming primaries. Trump's Republican challengers reportedly both spent the day in Indiana. Trump opted to stay in New York, a state that voted a week ago.

It's not that Trump needs to be physically in a certain state in order to be campaigning. Certainly, voters across the country heard what he had to say on Tuesday, as his victory speech from New York was broadcast on live television, and his appearance at the TIME gala was chronicled online. In both instances, Trump signaled that he was confident in his candidacy, calling for Cruz and Kasich to drop out and calling himself the presumptive nominee.

It's also not that Trump can't associate with celebrities while campaigning — that's pretty much standard practice in modern politics. The Clooneys have hosted fundraisers with the Clintons, and Spike Lee has done ads for the Sanders campaign.

If there's an issue with Trump's event schedule on Tuesday night, it's what that schedule could say about his priorities. By forgoing the campaign trail on Tuesday night, Trump essentially Kanye'd all of us — "Yo, voters, I'm really happy for you and I'mma let you finish, but..." First, he had to be a celebrity.

Trump's decision to walk the red carpet comes at a particularly interesting time in his campaign. There's been talk that the controversial, outspoken candidate could change his tone in upcoming weeks, in an effort to convey a more presidential attitude ahead of the general election. Both a Trump campaign official and Trump's eldest son have suggested that this change would happen, but Trump himself has assured voters that he's not playing a character and he doesn't plan to change. Choosing to attend a non-campaign event on the night of five elections definitely doesn't seem too presidential.

Ultimately, there's no doubt that Trump is influential — and there's no doubt that he was in the company of some very important people on Tuesday at TIME's gala. It is possible to doubt his priorities, though. At a time when some of the closest people to him seem to support a more presidential attitude, Trump chose the role he's more often associated with: celebrity. It's the role that likely brought so much of the attention that has been paid to this year's election, and it's the role that he just might ride all the way from the red carpet to the White House.