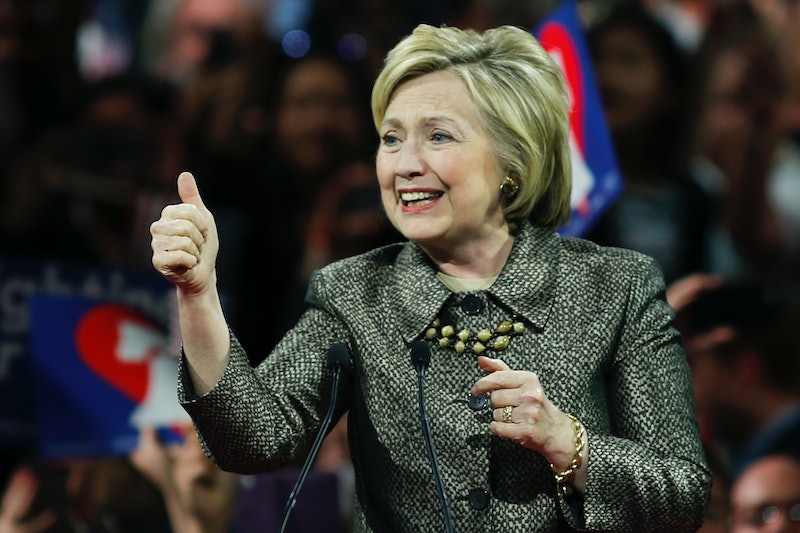 Tuesday was a great night for Hillary Clinton. Five states cast their votes in the Democratic primary, and Clinton won all but one of them. Her grip on the nomination is now stronger than it’s ever been — and it was fairly strong even before Tuesday’s primaries. As it stands, the overwhelming likelihood is that Hillary Clinton will be the Democratic nominee.

This is not because Clinton is leading Bernie Sanders in superdelegates (although she is), and it’s not because she’s won more primaries in total than Sanders (although she has). The reason Clinton is almost certain to be the Democratic nominee is that she has a nearly-insurmountable lead in pledged delegates.

Unlike superdelegates, the votes of pledged delegates aren’t up for grabs at the convention, or available to be “flipped” at any point in the process. Pledged delegates are required to vote in accordance with the results from their state, which means they’re immune to any late-breaking developments, or changes in the “momentum” of the race. And 85 percent of all Democratic delegates are pledged.

The bottom line here is that the pledged delegate count is really, really important. It’s by far the most important factor — and perhaps the only factor — in determining who becomes the Democratic nominee. After Tuesday, the delegate math tipped very strongly in Clinton’s favor, and this tweet from The New York Times’ Nate Cohn drives home exactly what that means.

Just to clear up some potential confusion here, Cohn is only referring to primaries — Sanders has won several caucus states by 30 or more points. Still, the math is stark even if we ignore that distinction and look solely at delegates.

Yes, it is possible that Sanders could win every remaining primary by 30 points. It’s also possible that he could win 64 percent of the remaining pledged delegates. But realistically, nothing that’s happened in this primary indicates that Sanders will be able to do either of these things. He's only won 45 percent of pledged delegates so far, and there's no reason to think he'll drastically exceed this average in every single one of the remaining states.

There are still a few big states that haven’t voted yet, and until the national convention, this primary fight will still be ongoing. But that doesn't change the fact that, as this race stands, Hillary Clinton is almost certain to become the Democratic nominee.