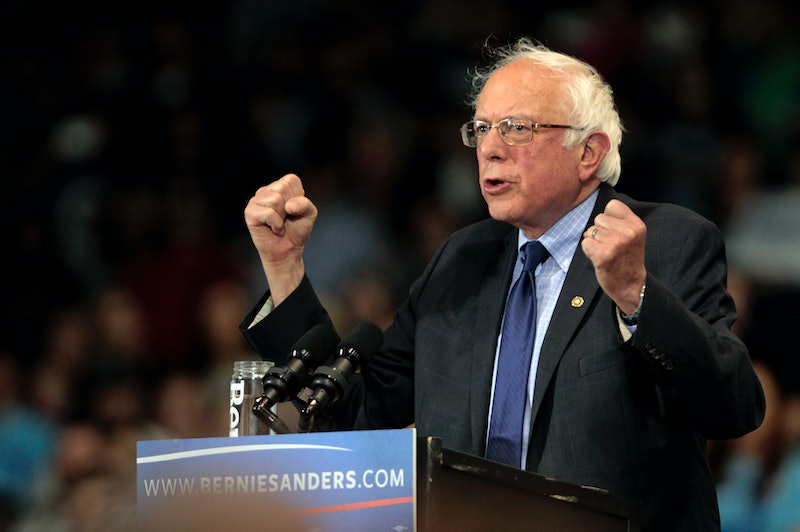 Bernie Sanders might be feeling a little burned looking at Tuesday's results. He only won one of the five states and his delegate total remains way behind where it needs to be, making his chance at winning the nomination ever more of a stretch. And, yet, Sanders says he will campaign until the convention — or at least "until the last vote is cast," as his statement phrased it Tuesday night.

Up until now, the delegate deficit hasn't seemed to phase his campaign staff. From what said this past week, their calculator wasn't counting him out yet. Whether it was based on math or used some sort of revolutionary fractions to compute wasn't clear. Just last Tuesday Sanders' campaign manager Jeff Weaver took to MSNBC to defend Sanders' path, arguing that superdelegates could be swung in his favor, given his electability and appeal among independents.

That kind of fighting language seems to have been kept under control this week. Tuesday afternoon Tad Devine, Mr. Sanders’s senior strategist, told The New York Times that Wednesday Sanders would talk to the campaign staff to address the challenges. Devine said Sanders may also reframe how he talks about prospects going forward. "If we are sitting here and there’s no sort of mathematical way to do it, we will be upfront about that," Devine said.

How exactly his campaign will develop going forward remains to be seen. Devine talked about two possible outcomes, one in which Sanders won big — and one that he didn't. "If we don’t get enough today to make it clear that we can do it by the end, it’s going to be hard to talk about it. That’s not going to be a credible path. Instead, we will talk about what we intend to do between now and the end and how we can get there," he told the Times.

The statement released Tuesday night makes it a little clearer what Sanders' new goals are — and it might not be to win the nomination at this point. It now seems as though his goal is to influence the Democratic party platform. He focused on how he did best in Rhode Island, the only state where independents could vote, and stressed that even independents should be able to determine "who they want as president and what the agenda of the Democratic Party should be." He continued:

That is why this campaign is going to the Democratic National Convention in Philadelphia with as many delegates as possible to fight for a progressive party platform that calls for a $15 an hour minimum wage, an end to our disastrous trade policies, a Medicare-for-all health care system, breaking up Wall Street financial institutions, ending fracking in our country, making public colleges and universities tuition free and passing a carbon tax so we can effectively address the planetary crisis of climate change.

So Sanders will continue campaigning, even as his path to the nomination continues to shrink. We can look forward to hearing more about the policies he supports, and how any Democrat should commit to making them happen. That could have nearly as big an impact as winning the nomination. Go for it, Sanders!