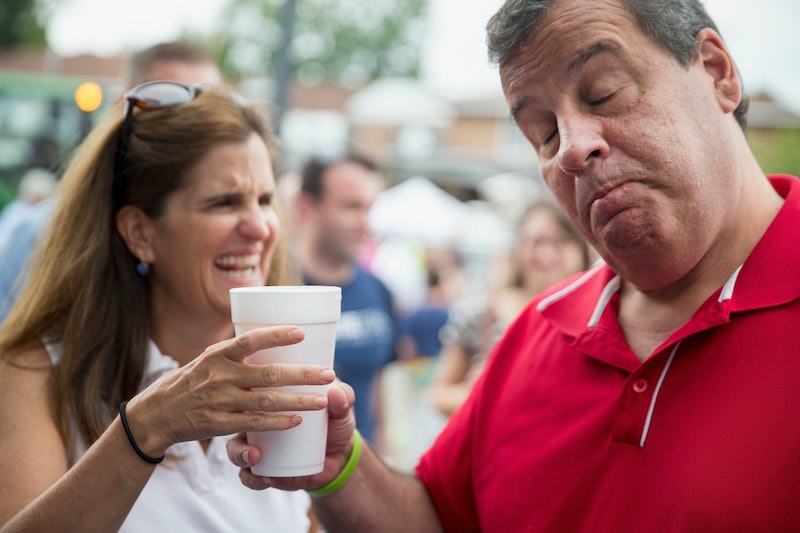 Following Donald Trump's Acela Tuesday victory speech, Mary Pat Christie caused quite a ruckus with what appeared to be a disapproving side eye. After winning all five of Tuesday's primaries, Trump denigrated Hillary Clinton's base of support and triggered a completely unexpected reaction. "Frankly, if Hillary Clinton were a man, I don't think she'd get 5 percent of the vote. The only thing she's got going is the woman's card." He went on to claim that women don't like Clinton, at which point Mary Pat's side eye became a national sensation.

The infamous expression was just too perfect for meme generators to pass up. And for the Christie couple, that wouldn't be the first time. At a post-Super-Tuesday news conference, Chris Christie stood next to Trump and stared blankly into space for minutes on end. In a shocking move, the New Jersey governor had recently endorsed the billionaire for president. Soon, jokes that he was being held hostage by Trump erupted to the point that #FreeChrisChristie began trending.

The internet comes up with some crazy theories, and based on Chris and Mary Pat's gazes, this one certainly isn't the most far-fetched. The following memes of Mary Pat Christie might just trump (pun intended) those made about Chris Christie's hostage situation. I dare you to not laugh. But first, let's start out with a flashback from March 2.

Less than a day after the gaze, Christie confirmed that the hostage rumor was false. Or so he says ...

This is just harsh.

Not Much Has Changed ...

He gave the same expression during Trump's speech on Tuesday, as Mary Pat seemingly rolled her eyes at The Donald's claim that Clinton is using the "woman's card."

She never knew she'd become so highly involved in this hypothetical hostage situation.

If she hadn't revealed a slight smirk, I'd believe it.

She's Not Buyin' It

This "women's card" nonsense needs to stop. Whether you like Clinton or not, you have to admit she has legitimate support based on her experience, not the fact that she's a woman.

Is She A Clinton Fan?

It remains to be seen.