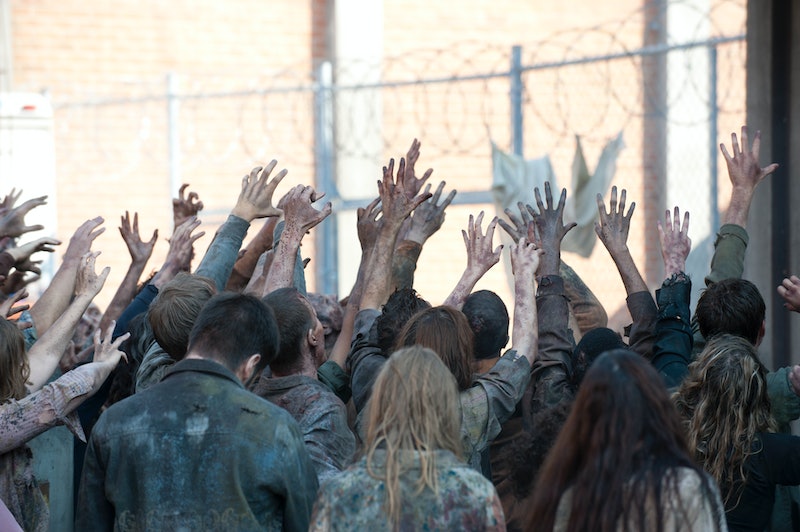 Last week’s return of The Walking Dead picked up where Rick, Carl and Michonne left off after all hell broke loose at the prison during the show’s midseason finale. After having to field suspense of not knowing who else might have survived, we caught up with on the rest of the inmates, who are all just wandering around in the woods surrounding the prison... but somehow can’t seem to find each other. Let's see what they're all up to:

This odd couple enjoys a role reversal — Beth was the one who had to convince Daryl to start looking for the others. She persuaded Daryl to use his tracking skills to start finding everyone, which lead them to a scene of carnage where walkers look to have been feeding. Of course, we're left to wonder on what... or who?

Daryl and Beth may be an odd couple, but the next group the episode focused on was even more bizarre. Sisters Lizzie and Mica are traipsing along in the woods with Tyreese… and Little Ass-Kicker! (Phew, Judith is alive!) Between the oddly comical moments — the girls ate grapes and tossed dirty diapers into the woods — we saw some serious moments, during which the odd group barely made it. Having Judith out in the woods was not easy, mainly because her loud cries were just begging to attract walkers. To make matters worse, Mica had to keep repeating, “They’re going to hear her.” The group heard cries in he distance, so Tyreese left the girls to see who was yelling. What happened after Tyreese departed was perhaps the most troubling: Of course Judith continued crying, and Mica kept worrying about the crying, so Lizzie stopped the crying by nearly suffocating Baby Judith. Luckily, Carol showed up to save the day, and when they all meet back up with Tyreese, we’re reminded that he never found out that Carol was the one who killed Karen and he never knew that Carol was banished by Rick. We’ll just have to wait and see how things pan out between these two...

Maggie, Sasha and Bob made it out of the prison, nearly unscathed. They ended up by the water and even though they may be safe, Maggie, of course, wanted to go and find Glenn. So, despite Sasha and Bob’s reluctance, they head out to find him. Sasha and Bob had an existential talk about what life is at this point in the apocalypse. (Bob concluded, “Not everything has to mean something.” So will this comment mean something later… ?) They found the school bus, which is overrun by walkers. Maggie’s genius plan to find out if Glenn made it out alive was to let the walkers out of the bus one by one. How could this go wrong? Spoiler alert: It does! Sasha and Bob were not able to control how many walkers were let out at one time, and, eventually, all the walkers flood out at once. (And none of them were Glenn). Of course, even though Maggie was barely fighting, the others managed to take all the walkers out and the group continued on.

So, yes, Glenn is alive. We’re rooting for you, Glenn! Unfortunately, he didn’t make it out of the prison, which has now been taken over by walkers. He takes a super-creepy trip back into the prison where he packed up and headed out — presumably to find Maggie. Getting back into the prison was easy, but getting out wasn’t. That is, it wouldn't have been so easy if he wasn’t Glenn or, oh yeah, if he didn’t have full police riot gear to wear. On his way out, he spots Tara — did he even know she is pretty much the reason everything went down at the prison? Regardless, with the help of a molotov cocktail, the two made a run for it and made it out of the prison. Sadly, Glenn found out from Tara that Hershel was killed by Brian/The Governor. But there wasn't much time to mourn, as they needed to kill a bunch of zombies. Remember, Glenn is just getting over the plague, so he wasn't in his top form. He took a fall and left Tara on her own to finish off the walkers.

At the end of the episode, a truck rolled up to Tara and Glenn. Out hops actor Michael Cudlitz, along with two other people. Looks like there are going to be a few new characters this half of the season!

More like this
'Children of the Underground' Subject Faye Yager Now Runs A North Carolina B&B
By Brad Witter
Dr. Anna Pou Is Still Practicing Medicine After Facing Murder Charges
By Brad Witter
Where Is Charlie Evens Now?
By Morgan Leigh Davies
Anthony Templet Wants To “Live Normally” After Killing His Father
By Brad Witter
Get Even More From Bustle — Sign Up For The Newsletter