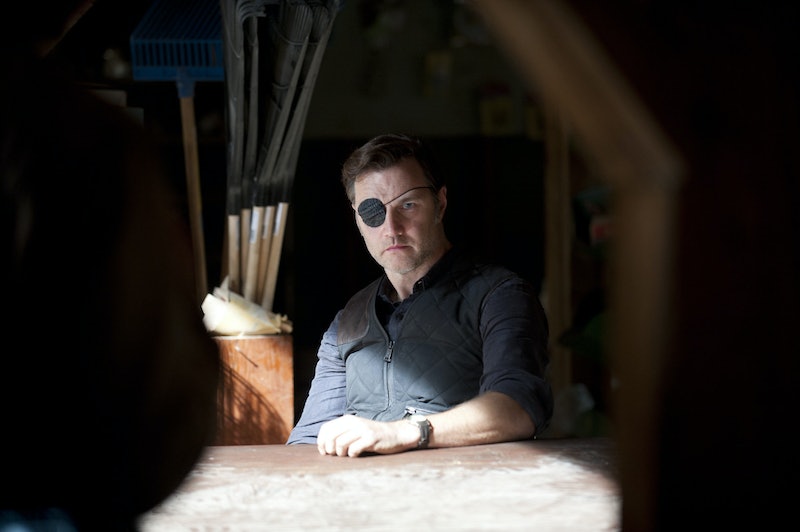 So, remember episode six, when The Governor kind of seemed like a changed man, and even I wondered if he's capable of redemption now that his main purpose in life seems to be protecting Lilly and Meghan from the big bad world of the zombie apocalypse? Right. Scratch that — The Governor, as conflicted and morally grey as he is, cannot be redeemed. He had his chances: Killing Martinez and taking over his group, as much as he "didn't want it," effectively ruined them all. Now, as last week's seventh episode ended with The Governor pointing a gun straight at Michonne and Hershel from the distance, it's clear the only thing we should be asking ourself going into this Sunday's mid-season finale is: Will The Governor actually die? And, who will ultimately kill him?

There's no question that he has to die at some point. Though The Governor-centric episodes have slightly slowed Rick and the prison group's plot down, giving us reason to sympathize with The Governor was a smart move on the producers' part, because for a moment — just a moment — we were reminded that this guy is still human, no matter how many terrible things he's done. He's still lost his wife and his daughter to the zombie apocalypse, and it's made him crack terribly under pressure; if things were different, he'd probably be a normal guy.

It clearly showed us what living in this brave new world can do to a person, as well as effectively threw us all off of the producers' true intentions for bringing The Governor back: We were never supposed to sympathize with him so that he could be redeemed, we were supposed to sympathize with him so we could understand what drove him to his current broken state of mind. At this point, he's a live wire, who has latched himself onto Lilly and Meghan — he will do anything to protect them, including killing Rick and the entire group so that the prison will be unoccupied to keep Lilly and Meghan safe. For Rick and the group to survive, The Governor has to die, either in this coming episode, or before the season finale.

This does bring up the question about whether or not it was a waste of time to bring The Governor back only to have him killed a few episodes later. Personally, I don't think it was: It was necessary to give us this glimpse of the slight humanity left inside of him, because last season, he was pretty much a cartoon villain by the end — interested in destruction for the sake of destruction. Now, he's three-dimensional, and whenever he does ultimately perish, he'll leave a lot of viewers extremely conflicted about how to feel.

It's not clear if he'll be the one dying this week, however: In the comics, he's killed by Lilly when she discovers his true colors — but this happens after Lilly kills Lori and baby Judith. Considering Lori is already dead in the show, things likely won't go down exactly this way. However, it's still possible Lilly will be the one to kill him: If she believes he's a threat to Meghan, it would be believable. Something like that probably wouldn't happen this week, though, which pretty much just leaves the possibility of someone from Rick's gang ultimately killing him, or even The Governor killing someone like Hershel — who was never supposed to survive past season two — and then being killed himself in revenge.

Then again... Hershel is one "tough son of a bitch." The Governor's time may be running out after all.

Tune in to The Walking Dead this Sunday on AMC at 10 p.m. to see what goes down.