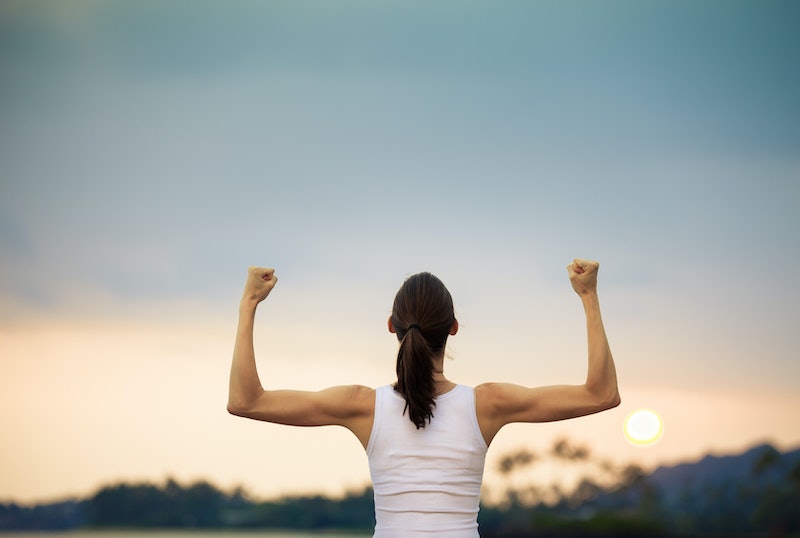 The question of what feminism means has been debated countless times over the years, and considering the diversity of viewpoints within the movement, it's probably no surprise that feminism means different things to different people. However, at its core, feminism is all about a simple concept: Gender equality. As prominent feminists point out again and again, it's literally the definition — the Merriam-Webster dictionary defines feminism first and foremost as the "theory of the political, economic, and social equality of the sexes." Although people may disagree on the particulars of achieving equality, the movement is ultimately united by the idea that women, men, and everyone on the planet are all deserving of respect.

It may seem like an idea most people can get behind, but according to research by the Harvard Institute of Politics, "gender equality" and "feminism" are still seen as separate concepts, even among the current crop of young people. As part of a larger poll studying young people's political attitudes, researchers asked thousands of 18- to 29-year-old American adults about their feelings toward gender in society: if the glass ceiling exists, whether they felt one gender is afforded more advantages than others, and other questions focusing on sexism in contemporary society.

According to the results, the majority of young people recognize that gender-based disparity is a problem — 64 percent of respondents agreed that men have more advantages than women today, and nearly three in five believed a glass ceiling exists. Only a quarter believed women are treated equally, and just seven percent felt that women are more advantaged. Certain factors may have made people more likely to recognize gender inequality — college students and graduates, for example, were significantly more likely to agree that men have more advantages in society — but overall, it was clear that the majority of young people are aware of how deeply gender norms affect society.

However, more support for gender equality doesn't mean there are more feminists. Although nearly half of respondents said they "support" feminism, just 27 percent of respondents identified themselves as feminists when asked, Mic reports. In short, respondents might agree that feminism is important, but they tend to prefer not to directly align themselves with the movement.

It may seem contradictory, but this rejection of the term is actually relatively well-documented. In 2013, a Huffington Post/YouGov poll returned similar results: Even though 82 percent of respondents said they believed in equality between genders, just 20 percent said they were feminists. Similarly, a 2015 study by the Public Religion Research Institute found that less than half of young women today consider themselves feminists, and a Vox poll that same year reported that just 18 percent of American adults align themselves with the term. Attitudes toward gender equality may be changing for the better, but even young people still shy away from feminism — so what gives?

Part of this can undoubtedly be chalked up to people's reluctance to label themselves. As IOP polling director John Della Vope pointed out to Mic, the disparity between support and identification was present in ideologies aside from feminism. Furthermore, feminism also has a history of being highly politicized. Gender equality may not be particularly radical as a concept, but research shows that those who consider themselves Republicans are far more likely to consider "feminism" a negative term, compared to Democrats or Independents.

Then there's the obvious answer: Feminism is still conflated with hating men in many circles, as if gender equality is about creating disadvantages for men rather than leveling the playing field. Of course, this is totally off the mark; in a culture of toxic masculinity, feminism benefits men just as much as women, even if it tends to manifest in more subtle ways.

On the other hand, shying away from using "feminist" doesn't mean gender equality is doomed; as Elle pointed out in 2015, polls show that each generation is more comfortable with the term. Furthermore, it's safe to say that the results are more important than specifically aligning oneself with feminism. Although the reluctance to identify with feminism is indicative of how far we have to go, the widespread acceptance of gender equality shows how far we've come.

More like this
Sandra Bullock, Girlboss Extraordinaire
By Matt Harkins & Viviana Olen
10 Times Boris Johnson Got It Wrong On Trans Rights
By El Hunt and Sam Ramsden
If Your Refrigerator Is A Mess, These 25 Organizing Products Can Help
By Courtney Young
Here's Your Daily Horoscope For May 23, 2022
By Mecca Woods
Get Even More From Bustle — Sign Up For The Newsletter