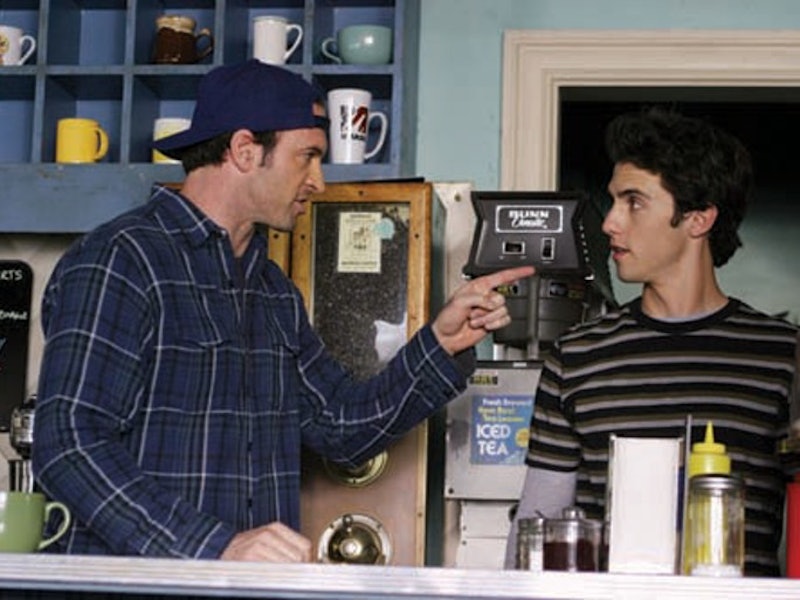 I know that when it comes to Gilmore Girls, we all immediately associate Jess Mariano with Rory Gilmore. But the truth is, while that relationship was riveting and exciting and all that juicy stuff that makes up an iconic teen/young adult TV romance, Jess had a more important and lasting connection on the show than even Rory. Listen, I love Jess and Rory together as much as the next person, but that's just the facts, friends. Arguably, Jess's most profound relationship on the show was with his uncle, Luke Danes, and it's no surprise that Milo Ventimiglia revealed on the Gilmore Guys podcast that the scenes between the two of them are what he remembers most about filming the original series.

As it turns out, the dynamic between Scott Patterson and Ventimiglia was extremely similar to that between Jess and Luke. The Gilmore Guys asked the actor, other than his favorite episode, "Teach Me Tonight," what were some "magical experiences" he had on the show. In response, Ventimiglia went in depth and explained what it was like to work with Scott Patterson and why it was so memorable. PSA: You need to prepare yourselves for the feels. Because this nephew/son duo was every bit as endearing together offscreen as they were on.

He explained that "magical experiences" occurred,

Pretty much anytime when it was Patterson and I. In real life, here I was this kid cruising on and he's like "the man" of the show... and here I am to shake things up. And I am very respectful and very appreciative but I was kind of a little punk myself... He was very serious about the work but I would kind of get him to lighten up a little bit. I would like rib him and the moments where he got tired and was rolling his eyes at whatever would go on, I was like, 'Scott, come on, man. We're not selling insurance, bro. Let's just have fun.'

I mean, does that not sound like an actual scripted Jess and Luke moment? Cause, uh, it totally does. But, aside from Patterson's occasional, warranted grumpiness at the end of a long day, it's apparent that the then-mischievous Ventimiglia truly cherished his time with his fictional uncle.

He went on to reminisce about the undeniable, familial type of chemistry that they shared,

The work that I'd done with Scott always felt right. It always felt like we were on the same page. We were in the same scene all the time and he was very serious about the work... And, at the end of it, once we got through it, we'd just kind of look at each other and smile because even in the heavy moments it was fun, it was a blast. That was the one thing I always remember about the scene work, was working with Scott.

Honestly, Ventimiglia isn't the only one with vivd memories of Jess and Luke. The Gilmore Guys point out that it was one of the "best" and most "potent" relationships on the show, and I'd have to agree. When I think back on the series, other than Rory and Lorelai's storyline, it's the initially hesitant but gradually vulnerable one between Jess and Luke that I loved most. The actor recalled the life-imitating-art type of balance between his silliness and Patterson's seriousness, and it's true. The same goes for Jess's rebelliousness and Luke's structure. Little by little, the characters, like the actors, brought out the best in one another.