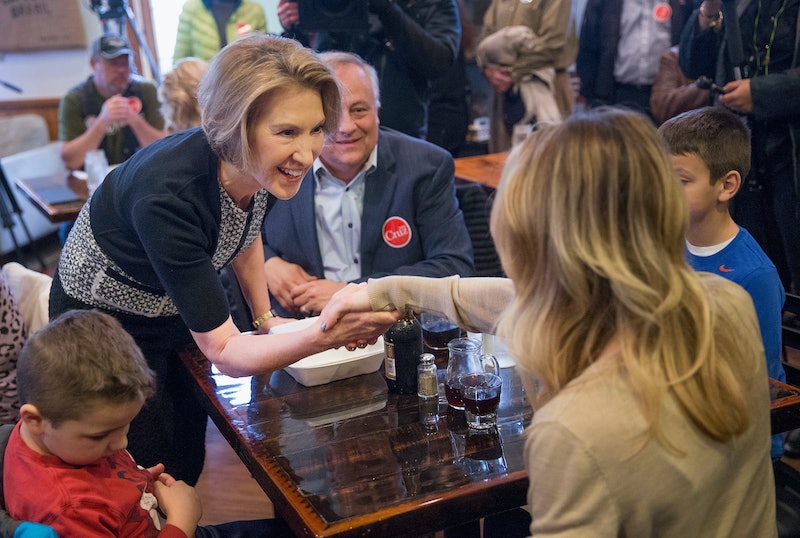 When reports from Reuters, CNN, and a host of other outlets hit Wednesday that Ted Cruz would select Carly Fiorina for his VP, it only made sense that comparisons to another high profile would-be veep started to crop up. Who could forget the 2008 election when John McCain tapped the relatively unknown Alaskan governor to be his running mate (when, you know, he was actually the Republican party's nominee)? But, other than the fact that they are both women, do Fiorina and Sarah Palin have anything in common?

Ideologically, they share some common ground — particularly in the "restricting women's healthcare access" department — but those things are kind of par for course on GOP platforms lately. What's interesting about Fiorina and Palin comparisons, however, is that they are representative of the evolution of their party as a whole.

It'd be reductive to go out and say Fiorina is a Palin 2.0 — they are both free-thinking women who are entitled to being represented with a bit more complex personhood than that. However, the shifting nature of the American right that made way for McCain-Palin 2008 (and later Donald Trump) has left room for the rise of someone like Fiorina. Fiorina and Palin are different breeds of (GOP-approved) femininity that conjure up different kinds of "outsider politics" — but ultimately they serve a similar purpose in appealing to conservative voters.

What Palin delivered was all Tea party, all the time. (Yes, the Tea Party didn't officially start until after she ran with McCain, but she was doing their shtick even before they formalized into a movement.) She's had (and still does have) that folksy, sing-song rage rhetoric. While at times bizarre, it positioned her as a voice for the disillusioned Tea Party-types — while simultaneously keeping her non-threatening. She championed the "every-man" and "every-woman" identity, preaching an approach to government that was more personal than political. And, like members of the Tea Party freshman class, the fact that Palin was green to policy and governing was seen as a badge of honor that humanized a seasoned politician like McCain.

It's that last part that hints at what Fiorina would bring to a Cruz ticket in a post-Trump election. Her background as a former CEO at Hewlett-Packard (successful or not) adds to her clout as an outsider when it comes politics (good!) but an insider when it comes to business deals (better!). In my opinion, she wields that apparent power and experience in a significantly more refined way than Trump.

Palin offered Fiorina some advice back in December to be more like Donald Trump, in a speech to the Young America's Foundation. She encouraged Fiorina to take a page from the reality star's brash and blustery playbook:

We want candidates, and we need candidates, to tell us what [they] think ... That's kind of lacking in [Fiorina's] campaign right now.

However, I doubt Fiorina will follow that advice. Fiorina is, clearly, not a fan of Trump — and Trump's not a fan of hers, either.

Of course, there's the elephant in the room (GOP pun intended): Will Fiorina help Cruz and/or Republicans woo women? Barack Obama won female voters by 14 points in 2008 against the McCain-Palin duo. If Republicans think Fiorina can help them appeal to American women, they may actually want to look to Palin to remind them to rethink that strategy.