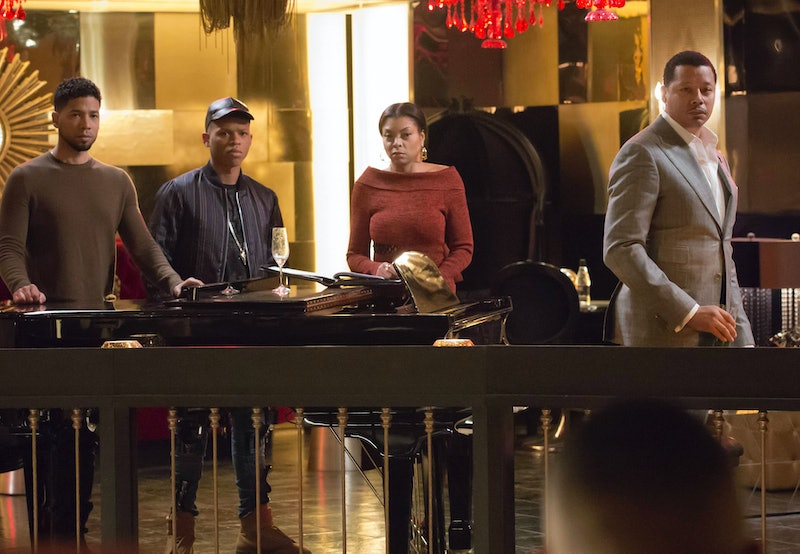 I think we can all agree that drama and Empire tend to go hand-in-hand, but by the end of Season 2 our favorite Lyon family will be forced to face their darkest plot development yet. According to the latest promo, someone will die on Empire , so the obvious question on everybody's mind is who will it be? Alright, well, technically, the clip promises that before the season is over "a Lyon will fall," right before the sound of a gunshot rings out. But it all seems to implicate the same thing. A Lyon is going to be killed by Season 2's end and I could not be more nervous as to who it could possibly be.

I mean, the prospect of losing anyone on this show feels like a devastating blow. Obviously it can't be Cookie because what even is Empire without her sassy wit and phenomenal wardrobe? But that still leaves the rest of this music dynasty as fair game, which isn't all that reassuring. So as a way to help us narrow down the list of possible candidates, here's who I think stands the biggest chance of meeting their maker by the time the finale rolls around. Let the worrying begin...

If I'm being honest with myself, Andre has the least exciting storyline of everyone on the show. His bipolar disorder has been an important topic to cover, but as of late it's been put on the back burner and shifted back to him covering the business end of the company, which (let's face it) sounds like a major snoozefest. Plus, there's the fact that he doesn't sing on the show, whereas Hakeem and Jamal are usually given multiple musical numbers throughout each episode. That may make him seem more expendable than his brothers. (Not to mention that I don't even want to fathom an Empire world without Hakeem.)

We it says a Lyon will fall, we assume that means one of the core members of the family, but what if the promo is purposefully being misleading? Technically, Rhonda is a Lyon since she's married into the family, so it's entirely possible that she's in just as much danger as any of them. Personally, I think the poor girl has been through enough this season after losing her baby, but the writers may think her demise would be the perfect way to send Andre spiraling out of control for Season 3.

Again, this would be another way the promo could end up faking us out. Given that she's Lucious' mother, she could arguably be considered to be a Lyon and since we already thought she was dead to begin with, the writers may decide to turn Lucious' big lie into a reality.

But, of course, that still leaves us with yet another important question. Because as worried as I am to find out who will die, I'm also equally curious to discover who the attacker will be. The Lyons have no shortage of enemies, so it could be anyone. And unfortunately for Lucious, he's about to realize that his dynasty isn't as invincible as he may like to think.

More like this
Will ‘Bling Empire’ Return For Season 3? Here’s What To Know So Far
By Kadin Burnett
'Heartstopper's Kit Connor Revealed His Hopes For Season 2
By Nola Ojomu and Sam Ramsden
'Ghost In The Shell: SAC_2045' Was Only Supposed To Last Two Seasons
By Kadin Burnett
'Bridgerton' Season 4 Will Likely Focus On This Brother's Divided Heart
By Grace Wehniainen and Alyssa Lapid
Get Even More From Bustle — Sign Up For The Newsletter