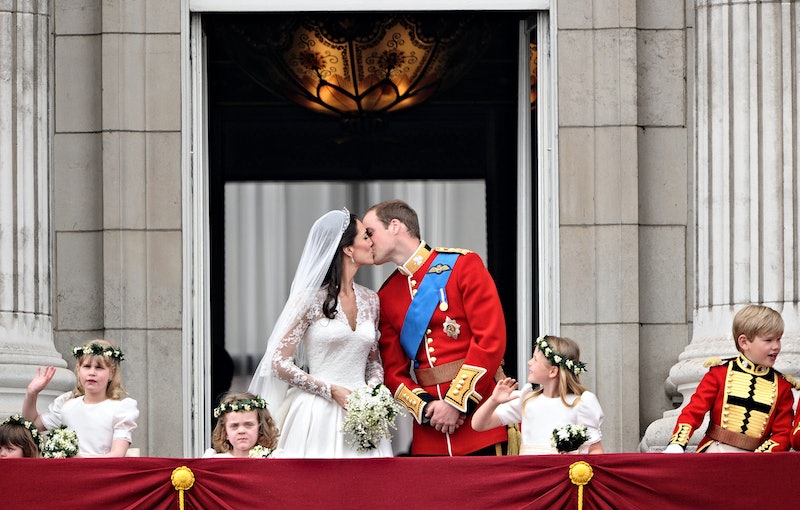 I know it's hard to believe, but five years have passed since Prince William married Kate Middleton, and the world has changed quite a bit since then. Of course, five years in the grand scheme of the universe really isn't very long, but technological advances and a constant news cycle ensures that as things change, people are consistently aware of what's going on in the world. In fact, it can be a bit dizzying. So what are some things that were a big deal in the spring of 2011, when the Duke and Duchess of Cambridge said "I Do?"

Although it's prudent to point out that there are plenty of things that haven't changed — President Obama was still leading our country, though in his first term, social media was pretty omnipresent, people were tweeting and updating their Facebook statuses, and the world was gearing up for a new season of Keeping Up with the Kardashians — plenty of things have changed since 2011. For starters, boy band fans were super sad that the Jonas Brothers were on a long hiatus, One Direction had already teamed up on The X Factor UK, but they hadn't even released their debut album yet. Crazy.

Here are some more changes that have happened since April 2011 that make five years seem soooo long.

Nobody Was Snapchatting Yet

As a whole, technology wasn't radically different five years ago — people were tweeting on their iPhones, and selfies were already a thing , but there were a few key differences. For one, Instagram did exist, but it wasn't as wildly popular as it is now, and it wasn't owned by Facebook until April 2012. Also, there was no Snapchat, so there certainly was no face-swapping nor King Kylie makeup tutorials. In fact, Jenner was only 13 then. Aw.

And Phone Dating Apps Weren't All The Rage

Online dating through sites like Match.com and OKCupid.com was just as popular, but the use of phone apps simply wasn't as big a deal as it is now. It seems weird to think of a world where people flocked to their computers to check out their winks and private messages, but using a phone app to do so just wasn't as prevalent as it is these days. In fact, Tinder was created in 2012, so guests at the Royal Wedding wouldn't have understood the term "swiping right."

Friendster Fell By The Wayside

Friendster, which was kind of like the Ross Geller of the social networking sites (you know, sometimes cool but generally pretty lame), struggled to regain footing after the massive popularity of sites like MySpace and Facebook, and officially shut down in May 2011. It transitioned into a social gaming site before dissolving for good in June 2015. RIP Friendster, we hardly knew ye.

The Bronx Zoo Cobra Was Terrifying New Yorkers From Every Borough

Before there was Pizza Rat, or Buster the Kangaroo, or the slaughterhouse cow on the loose, there was the Bronx Zoo cobra, an Egyptian cobra that was on the loose for about a week in late March 2011 inspired many an Internet meme and quippy article. Thankfully, the snake was found alive, and still has her very own Twitter account where she gripes about the weather and politics... just like a true New Yorker.

Sheen's entire life and career was known for being tumultuous, but the spring of 2011 was a particularly low point for the actor. His personal struggles ultimately led producers on his hit show, Two and a Half Men , to fire him, and he joined Twitter with a series of bizarre public outbursts ranging from "tiger blood" to #winning, and he seemed to be battling many demons. In 2015, Sheen revealed he had been diagnosed as HIV positive about four years prior, but appears to be on a more stable path these days.

I'm not even certain the Duke and Duchess of Cambridge had time to pack for their honeymoon in the islands of the Seychelles when news broke that U.S. troops and CIA operatives shot and killed Al Qaeda leader Osama bin Laden in Abbottabad, Pakistan, where he'd been in hiding for years. Bin Laden was killed in the early morning hours of May 2, 2011, prompting cheers and celebration around the globe.

Back in 2011, baby Bieber was riding the wave of fame as one of the most beloved pop stars in a long time. After the success of his documentary movie, Justin Bieber: Never Say Never, America had Bieber fever and there was no cure. People bought all kinds of Bieber memorabilia, including a singing toothbrush, which sang his hits, including "Love Me" and "Baby," while you polished your pearly whites. If that's not enough, according to MTV, "There is an entire line of Bieber-themed dental care, including flossers boasting Justin’s signature to a travel kit that comes with a tongue scraper! And, adults, there is a Justin Bieber toothbrush made for your enormous, adult-size mouth, too." Of course, this was before Bieber's struggles with the law and highly-publicized public mishaps... which surely gave more than a few fans a toothache. Sorry, Biebs.

In March 2011, Trump adamantly doubted that President Obama was born in Hawaii, believing that he may have been born elsewhere in the world. According to TIME, Trump even traveled to Hawaii himself "to conduct a personal investigation" into the matter, which is totally a thing Trump would do. In late April, the White House released Obama's long-form birth certificate, and, according to TIME, Obama himself quipped, "No one is prouder to put this birth certificate to rest than The Donald. Now he can get to focusing on the issues that matter. Like, did we fake the moon landing? What really happened at Roswell? And where are Biggie and Tupac?" Mic drop.

Planking Was A Thing

Thankfully, these days planking is just a killer core exercise, but back in 2011, it was an actual fad, in which people tried planking on all sorts of surfaces, safe (like a soccer field) and not (like a seventh floor balcony). According to TIME in 2011, "an Australian man tragically fell to his death in May as his friends attempted to take a picture of him" planking. Thankfully, this trend is no more.

For many people, Friday is the best day of the week. For tween Rebecca Black, she loved it so much, she sang a song about it... a song that became so notorious, it was actually named the "most hated video on YouTube" in 2011. The lyrics to "Friday" were banal and many criticized Black's singing, but no matter how you felt about it, the song was impossible to ignore. Not sure if Will and Kate had it on their wedding playlist, but it would've been a fitting choice: Their nuptials were held on a Friday, after all. TGIF!

Lemonade Was Simply A Sugary Drink

These days, Beyoncé's Lemonade is the album people can't stop talking about, but in 2011, Bey might have discouraged her young fans from actually drinking it. Back then, Bey was promoting her forthcoming album, 4, which was released in June 2011, and she released a video for "Move Your Body," a version of "Get Me Bodied" designed to promote fitness and health as part of Michelle Obama's campaign against childhood obesity. The clip featured Bey dancing in a cafeteria with a slew of kids and is endearingly sweet... and still calorie-free. That's the power of Beyoncé.

In the five years since Prince William and Kate Middleton said "I Do," it certainly feels like plenty has changed. Who knows what the next five years have in store? I can't wait to see.

More like this
What Is Barack Obama’s Net Worth? He Makes *Way* More Now As An Ex-President
By Hugh McIntyre
Stormi Just Walked A Red Carpet With Mommy Kylie Jenner & Daddy Travis Scott
By Hugh McIntyre
Kylie Jenner Gave A Surprise Postpartum Update On TikTok In The Most Meta Way
By Grace Wehniainen
Selena Gomez Reacts To TikTok Users Who Say She Shaded Hailey Bieber
By Grace Wehniainen
Get Even More From Bustle — Sign Up For The Newsletter