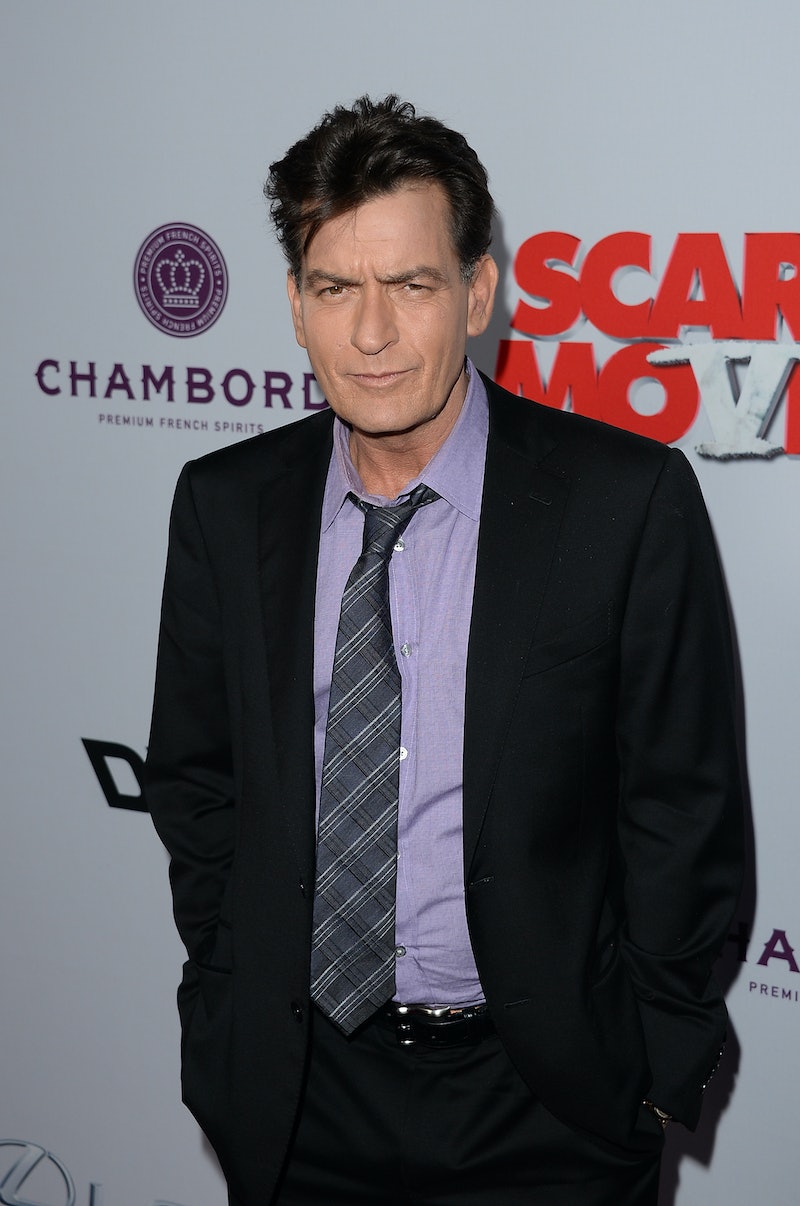 On Tuesday, during an interview with the Today show's Matt Lauer, Charlie Sheen announced he is HIV positive. He said, "I'm here to admit that I am, in fact, HIV positive. And I have to put a stop to this onslaught, this barrage of attacks and of sub-truths and very harmful and mercurial stories that are about threatening the health of so many others, which couldn't be farther from the truth." Sheen also admitted that he had told "enough [people] that I trusted to be in the position, in the situation, that I'm in today," though his honesty didn't always turn out for the better.

On Monday, NBC shared that the Two and a Half Men actor would be giving a "revealing personal announcement." The network didn't give any further details, but soon after, TMZ claimed "sources connected to Today" alleged that Sheen's HIV diagnosis was exactly what he would shared with Lauer. Bustle reached out to Today and to Sheen's rep at the time, but did not receive an immediate response.

Sheen revealed that he was diagnosed four years ago, based on this series of "cluster headaches" and other symptoms that led to him believing that he had a brain tumor. After a series of tests, he received his diagnosis, which he called a "hard three letters to absorb... a turning point in one's life." He also spoke of how people had demanded money for their silence on this issue, and, while he couldn't name an exact number, the payouts numbered in the millions. Lauer read a letter that Sheen had shared with him about the situation:

"In and around this perplexing and difficult time, I dazedly chose or hired the companionship of unsavory and insipid types," Here, Lauer clarified that this was in reference to prostitutes. "Regardless of their saltless reputations I always led with condoms and honesty when it came to my condition. Sadly, my truth soon became their treason as a deluge of blackmail and extortion took center stage in this circus of deceit."

According to Sheen, it's "impossible" for him to have knowingly or unknowingly transmitted the virus since his diagnosis, although he has had unprotected sex post-diagnosis with partners who were aware of his condition beforehand and worked with his doctor to keep themselves protected. While he states to not be entirely sure how he contracted the disease, and also emphasized that he cannot entirely blame his rash of personal problems and outbursts on his diagnosis, Lauer did read another portion of Sheen's letter that stated, "The personal disbelief, karma, confusion, shame, and anger led to a temporary yet abysmal descent into profound substance abuse and fathomless drinking."

Hollywood publicist and crisis manager Howard Bragman alleged to People on Monday that Sheen's people came to him to deal with the situation. Bragman claimed, "It's been going on for quite awhile. He's not necessarily comfortable talking about it. It was very hard to get up the courage for him to talk about it." Bragman also alleged, "The interview could open up a lot of sympathy for him, but he has to be concerned about a fear of litigation from former sexual partners. You don't take that lightly."

More like this
Here’s How Lizzo Is Supporting Abortion Rights After The Roe v. Wade Reversal
By Brad Witter
Olivia Munn Got Real About How Her Body Hasn’t “Snapped Back” Post-Pregnancy
By Stephanie Topacio Long
Alyson Stoner Says She Went To Rehab After Auditioning For 'The Hunger Games'
By Jake Viswanath
Sandra Oh Says Early ‘Grey’s Anatomy’ Fame Caused Her To Get “Very Sick”
By Brad Witter
Get Even More From Bustle — Sign Up For The Newsletter