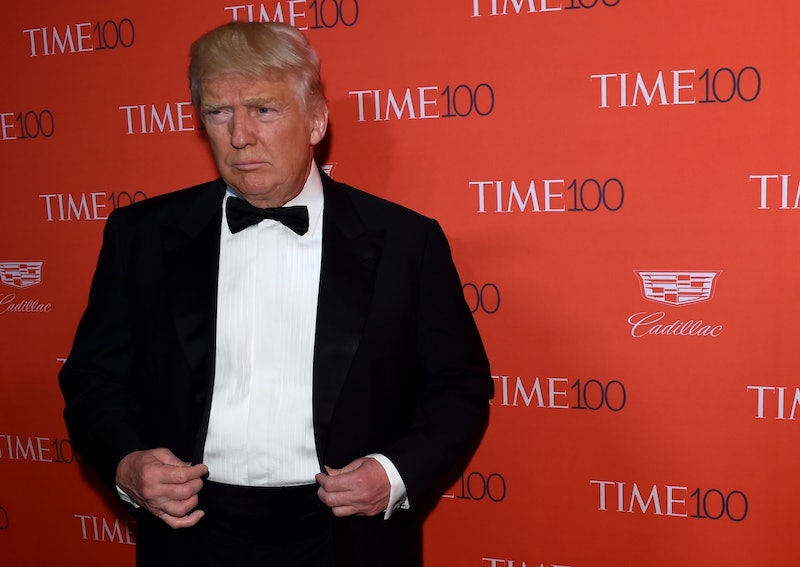 Don't look now, but the star-studded night is nearly upon us! Saturday night is the White House Correspondents Dinner, that annual intersection of the political, media, and pop cultural elite. There will be a typically chock-full who's who guest list, including (of course) the President and First Lady of the United States. But there's one man who won't be in attendance, despite representing those intersection all on his own — Republican presidential frontrunner Donald J. Trump. So, where is Donald Trump instead of the WHCD?

It's not that Trump has never attended the big dinner. To the contrary, back in 2011 he was the target of some of the most famous presidential ribbing in recent memory, and well-deserved at that. Over the course of a few minutes of President Obama's usual WHCD comedy routine, with the cameras occasionally cutting away to show Trump's hair-helmeted head poking out among the assembled guests, the then-reality TV star was subjected to thorough mockery, most of it about his embrace of "birther" conspiracy theories about Obama's citizenship. He later insisted that he wasn't bothered by it, although some reports from the event didn't back him up.

That fateful night and the reaction to it, in fact, is actually part of Trump's excuse for skipping the event in 2016 — he's claimed that the media would report that he was miserable regardless of how he felt about the dinner, so he decided not to show.

But what will he be up to instead? It's not as though he's necessarily opposed to blowing off his political obligations for a while to attend some upper-crust event — on Tuesday, he was reportedly late for his own victory speech because he was attending the TIME 100 gala. But on Saturday night, he has no such specifically stated excuse, beyond the obvious one: the man is currently locked in a week-long stretch that could ultimately decide whether or not he wins the Republican nomination.

In the days leading up to Saturday, Trump was spending his time in the state of Indiana, where the Republican primary will be going down on May 3. To say it's a big one really sells short the urgency of the moment — if Ted Cruz (and his newly minted running-mate Carly Fiorina) can't stop him there, he'll be moving forward as a heavy favorite to secure 1,237 pledged delegates, thus winning the GOP nomination outright.

In fairness to Trump, it's not at all surprising or unprecedented that a presidential contender would be skipping the WHCD — most of the others aren't going to be there, either. No Hillary Clinton, no Ted Cruz or Carly Fiorina, no John Kasich. It's a kind of glitzy, insider-y event to attend if you're trying to position yourself as the ultimate outsider, although Trump has seemed oddly able to inhabit both worlds at the same time. Also, surprisingly enough, Vermont Sen. Bernie Sanders reportedly will be there, as a guest of CBS News.

In any case, you'll be missing out on the Donald if you're watching the dinner, as well as all the other remaining 2016 candidates. If you're keen to check it out anyways, however, you should set your Saturday night aside — WHCD host Larry Wilmore has made it clear, for what it's worth, that Trump will be getting his fair share of derision even though he isn't there.