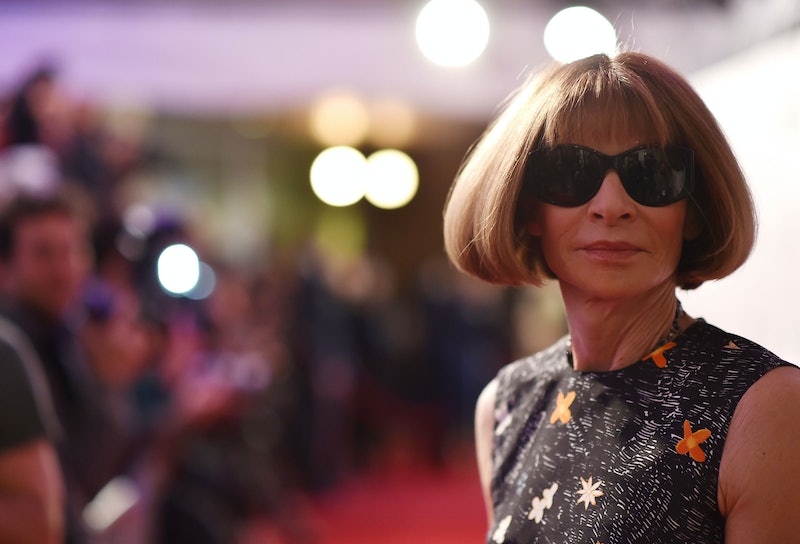 Say what you will about the woman who allegedly inspired The Devil Wears Prada, but there's no denying the famous Vogue Editor-in-Chief's distinct personal style. Still, there's something you may not have noticed — and it's the fact that Anna Wintour's Met Ball outfits have always included one surprising thing.

Strange, right? As chair of the Met Gala (a position she's held since 1995), it's one of her biggest fashion outings of the year — so, what's the common thread that runs between a surprising number of her outfits? Well, before you leap to conclusions and shout, "Sunglasses!" or "A severely-chopped bob!" or even "A sheath dress!" think again: It's something a little more unexpected than that. Sure, all of the above are factors, but what's the one piece of the ensemble that stands out? Why, it's her penchant for bolero jackets.

It may seem like a somewhat innocuous — even quaint — article of clothing, but it's one that Wintour evidently likes very much. After all, she's firmly stood by it for years (years) — the first time she made a Met appearance in a bolero was all the way back in 1993, over twenty years ago. So, with all that in mind, let's take a look at some of her best boleros from over the years.

The 2003 theme was "Goddess," and I'd say this Christian Dior satin dress/ostrich feather bolero does it definite justice.

Her ostrich feathers may have met their match in this mini fur jacket.

This space-age Chanel gown did very nicely for that year's "Superhero" theme.

Look closely, and you'll notice that this is not a bolero — it's actually part of the dress. It does, however, make for an absolutely delightful bolero illusion.

Another day, another white dress and fur jacket (this time with gold sequins).

OK so this isn't technically the Met Gala, but it was a Met Gala event — and that floral-esque number might just be one of her best boleros yet.

Which Met Gala tiny jacket do you like the most? The colorful number she wore most recently is pretty darn gorgeous — but then again, it's tough to get any more fabulous than actual ostrich feathers.