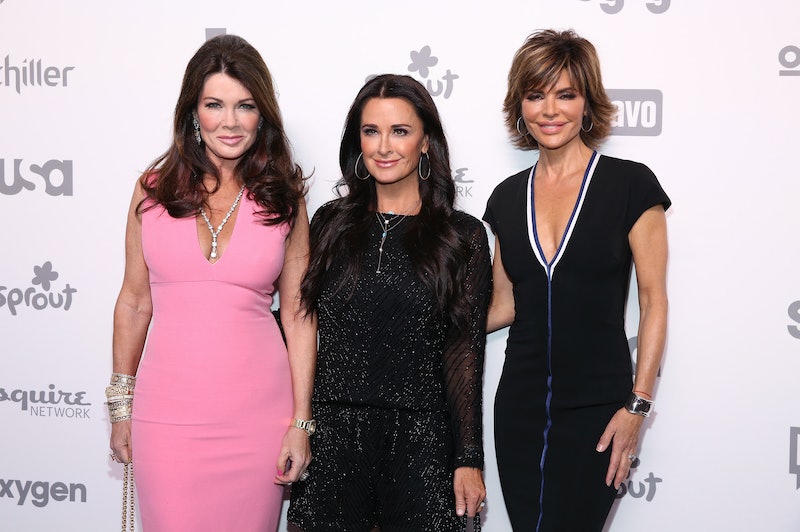 Real Housewives of Beverly Hills Season 6 is almost over, but I still feel like I'm so far from having closure. With only one part left in the reunion (which airs Tuesday night), there is one lingering question that I need answered: Is Lisa Vanderpump responsible for the Munchausen drama? I know that it was touched on in the first part, but it wasn't actually answered.

This season of RHOBH revolved around the Housewives talking about Munchausen syndrome and a mysterious accusation that Yolanda Hadid might have it rather than Lyme disease. (Yolanda has, of course, stood by the fact that she has Lyme disease.) More specifically, the drama has been about who started the Munchausen talk in the first place.

During the reunion, Lisa Rinna claimed that LVP once said, "There goes our f*cking story line" in response to Yolanda leaving the room after Lisa Rinna's birthday dinner. Rinna suggested that Lisa V wanted her to bring up Munchausen and sort of masterminded it into being part of the season.

I don't think this is something LVP will ever directly address, so in my eyes it comes down to Kyle Richards. She is the only common factor who was present when the Lisas were discussing Yolanda's health. I think Kyle is the only one who could verify whether Lisa Vanderpump pushed this story line and fill in whatever information may be missing to answer the question of who really started the Munchausen drama.

It definitely makes sense to say that someone pushed this plot line along — Yolanda's health was the focus of the entire season — so I could see why one of the cast members would think it was necessary to have some sort of drama on the show.

Don't get me wrong, I got tired of this story line before the reunion started, and I want to move past it. And I feel like the only way that I can truly get past it is if I get some answers about who started it in the first place.